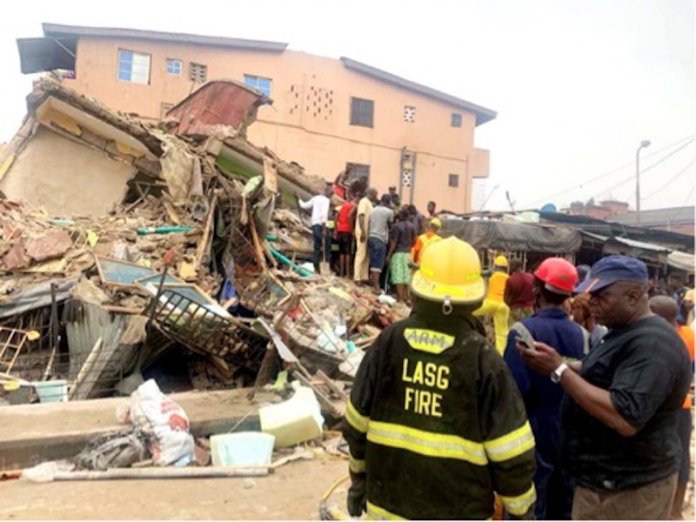 At least, three persons have died, nine rescued and several others currently trapped under the rubbles of a three-storey building in Lagos Island that collapsed early Saturday.
As gathered, the building sited on 7 Freeman Street collapsed on the 12 occupants at about 0405hrs on Saturday and left them trapped under its rubble.

Efforts by the Lagos State Emergency Management Agency (LASEMA) and other emergency agencies aided the rescue of nine occupants including a 7-year-old boy, six adult males and two females.

They were given pre-hospital care by LASEMA and the Lagos State Ambulance Service (LASAMBUS) in order to stabilize their health conditions, before being rushed to hospitals by the combined team.

While the nine escaped death, three others were not and one of the three bodies recovered from the rubble was said to be a child that was asleep when the three-storey building caved in.

The child was identified as 9-year-old Abdusalam Balogun, a 6-year-old girl (yet to be identified) and an adult female, all of whom were handed over to the State Environmental Health Monitoring Unit, SEHMU and have been transported to the mortuary.

At completion of the exercise, Director-General of LASEMA, Dr. Femi Oke-Osanyintolu, confirmed the tragic incident in a statement made available to newsmen and stated that the remains of the dead victims have been transported to the mortuary, while the nine injured are being administered pre-hospital care by the agency.

He said: “The agency responded to emergency calls on the above captioned incident. Upon arrival at the incident scene at 0405hrs this morning, a 3-storey building was discovered to have totally collapsed on people asleep inside.

“Nine victims have been extricated from the rubble alive while three bodies were recovered dead. Their remains were transported to the mortuary by SEHMU while pre-hospital care has been administered to the Nine victims by LASEMA and LASAMBUS.