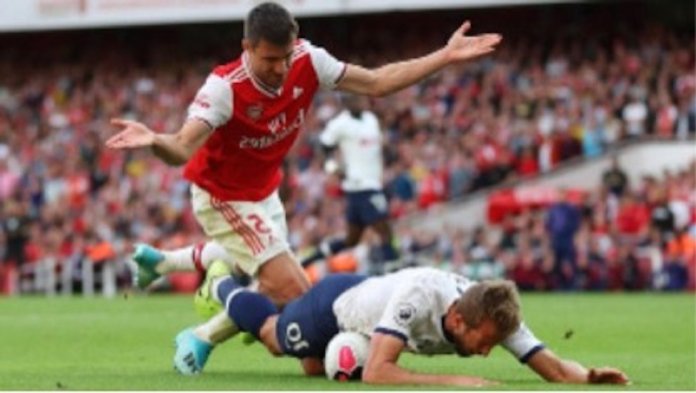 Aside from being the first North London Derby at the new Tottenham Stadium, tomorrow’s clash between Spurs and Arsenal would also go a long way in determining which of the two London clubs get the ticket for next season’s Europa League, that is why the clash will be more than a derby. It is however a good game for the neutrals to enjoy

Tottenham and Arsenal are set for a north London derby that is crucial to both clubs’ aspirations of finishing in the European places.

One point and a place separate the two clubs, with Arsenal currently above their bitter rivals on 50 points in eighth. A loss for either club on Sunday would be a huge blow to their challenge for fifth spot.

The hosts have been inconsistent, winning two, drawing two and losing one since the Premier League resumed, while the Gunners have recovered from two defeats to go four games unbeaten, including three straight wins before the home draw with Leicester City. Spurs on Thursday forced Bournemouth to a goalless draw.

Spurs will not want to lose the first north London derby at their new stadium but there are still a few issues over their defence that will give Arsenal hope going into the game. The hosts will also have to do without Eric Dier in central defence after he was given a four-game ban, which will encourage the likes of Pierre-Emerick Aubameyang and Alexandre Lacazette.

The last two meetings have ended in draws, with both teams scoring, but with Arsenal’s form picking up over the last couple of weeks, the Gunners might get the three points.

Today, Chelsea travel to Bramall Lane to face Sheffield United knowing that a sixth win in seven Premier League games will edge them a step closer to qualification for the Champions League.

However, the Blades welcome the Blues to Yorkshire having put together a three-match unbeaten streak, leaving the club just one point adrift of sixth-placed Wolverhampton Wanderers.

After the resumption of the Premier League, Sheffield United looked like being one of the clubs who were struggling to adapt to the different surroundings, perhaps understandably having lost all momentum due to the enforced break.

However, the Blades have been excellent over the past week, with home victories over Tottenham Hotspur and Wolverhampton Wanderers coming either side of a draw away at Burnley.
With all three of their last opponents acting as rivals in the race for the Europa League, each result has been recorded at the right time, leaving Chris Wilder’s team on the brink of moving into the top six.

Although squaring off against Champions League chasing Chelsea represents another tough test, there will be no shortage of confidence after the manner of their last-gasp triumph over Wolves.

United outlasted a team which have made a habit of late flourishes, and it will naturally lead to Blues boss Frank Lampard having concerns about how his players will handle their upcoming contest.

Despite edging out Crystal Palace on Tuesday night, Chelsea struggled to close out the 3-2 win, relying on an outstanding late save from Kepa Arrizabalagba and an even better goal-saving tackle from Kurt Zouma.

While Lampard would have been impressed and relieved in equal measure, he has acknowledged that his team cannot afford to keep putting themselves in such situations, particularly after squandering so many opportunities at the other end of the pitch.

That has been a common theme throughout the season, although Lampard can only be delighted with how Willian and Christian Pulisic have performed since the resumption.

Willian has four goals and three assists to his name, while Pulisic has netted in games against Aston Villa, Manchester City and Palace respectively.

Meanwhile, West Ham United will be looking to boost their Premier League survival hopes and all but relegate Norwich City in the process in today lunchtime’s clash at Carrow Road.

The Hammers are four points above the relegation zone following a mixed run of form, while Norwich are 10 points from safety with four games to play.

However, a 2-2 draw against Newcastle United four days later was a case of an opportunity lost, with West Ham twice squandering a lead against opponents with little left to play for.

Then came Wednesday’s 1-0 home loss to Burnley condemning the Hammers to a fourth defeat in six matches.
Thankfully for West Ham, the teams below them have also struggled to pick up points since last month’s restart, so there is still a four-point buffer on Aston Villa.

The Villans are on 27 points while Bournemouth are on 28 points, after loss against Manchester United and draw to Tottenham Hotspur respectively on Thursday.

There is no doubt that David Moyes’ side are still very much in a relegation battle following their midweek reverse to Burnley, with four big matches to come.

West Ham have Norwich, Watford and Aston Villa to face in their four remaining games – three of only four teams currently below them in the table – plus a trip to in-form Man Utd.
It is now effectively a battle between four teams for the two remaining relegation spots given that Norwich have already accepted their fate.

The Canaries are rock bottom of the division, as they have been since pre-Christmas, and need to win all four of their remaining matches to have any realistic hope of staying up.

With trips to Chelsea and Manchester City still to come, it is fair to say that Championship football will be returning to Carrow Road next season.

Daniel Farke’s men are now playing for pride, and this visit of West Ham does at least offer them a chance to register just a sixth victory of a disappointing campaign.

Four of those wins have come at home, giving them the worst home record in the top flight.