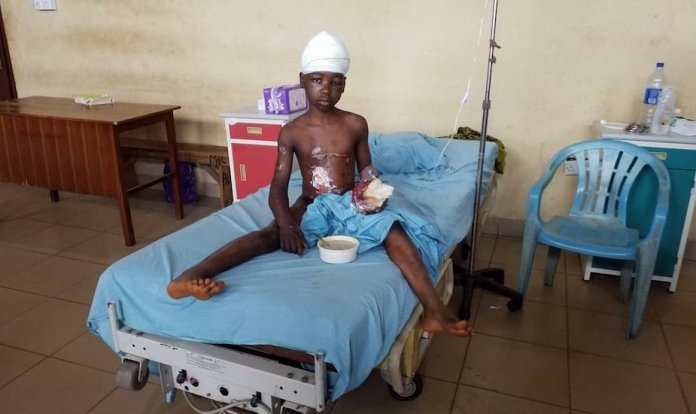 It was renowned poet and Nobel laureate, Prof. Wole Soyinka, who said that the man dies in all who keep silent in the face of tyranny.

Yes many men and women have died. Others are still dying in the face of tranny. Enugu State Governor Ifeanyi Ugwuanyi, a father figure to all, has always lived up to the expectations in the face of tranny or challenges, without minding whose ox is gored.
He has demonstrated, preached, lived and upheld it over the years, even before his foray into partisan politics. With his entry into politics and rise in positions, he expanded it. He became more famous and synonymous with philanthropy, magnanimity and welfarism, which some mischief makers often misconstrue as profligacy or wastage.
Ugwuanyi’s swift and prompt response to the ordeal of the Enugu brutalised maid, Miss Nneoma Nnadi in the hand of her foster parent is nothing, but typical of him. A continuation of his ceaseless caring and philanthropies towards the needy and downtrodden at every critical time.

Providing succour and lifeline to the brutalised and traumatised little girl, Ugwuanyi, has not only approved the award of scholarship up to university level to her, but has also directed the state scholarship board to implement the approval with immediate effect. This is reassuring and pragmatic.
In addition to the earlier directive to the State Ministry of Gender Affairs and Social Development to provide and fully pay for the best available medical care for the child, Ugwuanyi has further directed the immediate release of financial support to the family of the child for their upkeep”.
He has equally directed the State Attorney-General and Commissioner for Justice, Chief Miletus Eze to liaise with the Nigeria Police and ensure that the suspects are brought to justice timely.

With these, there is no doubt that better future has been secured for Nneoma, while justice will be done on her matter, especially with the parading and charging of the culprits, Mr and Mrs Ifeanyi Jude Ozougwu to court and remanding them in correctional centre at Nsukka for further directive from the Attorney-General. This has made it a State matter and relieved Nneoma’s parent the burden of hiring lawyer, paying legal fees and others.

For those who were surprised by Ugwuanyi’s passion and concern for Nneoma’s ordeal, that has been his nature and style of governance. He hates injustice and suffering, thus he made social justice one of his administration’s key agenda since 2015.
It would be recalled that in December last year, there were two fire incidents at Ugboezeji, Abakpa-Nike and Filling Station in Trans Ekulu, where many people were affected.
Upon receiving the news of the inferno at Ugboezeji, a suburb in Abakpa Nike, Ugwuanyi quickly dispatched government delegation led by the Speaker, House of Assembly, Rt. Hon. Edwin Ubosi to sympathise with the victims, which include three widows and two other tenants. Consequently, Governor Ugwuanyi in his usual philanthropic disposition gave the five tenants of the burnt building N500,000 each and the landlord received N1 million. The victims, who could not hide their joy visited the Government House on a Thank-you visit to the governor.
Speaking during the visit, the daughter of the late landlord of the burnt property, Priscillia Aniekwe, thanked the governor for rescuing them with the cash donations. One of the victims, a widow, Mrs Nneka Onyekwelu said: “we are happy for what our God fearing governor has done for us. Let Almighty God bless him. We had lost hope, when everything we had got burnt and our governor came to our rescue immediately. What a caring and people’s governor that is always there for his people”.
Also not left out are three victims, who lost their two tricycles and bus in another fire incident at a filling station in Trans Ekulu, which was caused by the spark of light by the nozzle of a truck that was discharging gas at the station. The governor had during his visit to the scene of the inferno assured the victims that he would replace their burnt tricycles and bus. Some days later, the victims were invited to Government House, Enugu, where they were handed over two brand new tricycles and one bus by the Executive Secretary, State Emergency Management Agency, Mrs Nkechi Eneh on behalf of the governor. Expressing his joy, one of the victims, John Obalezi said: ”We are here because the governor visited when our bus and tricycles got burnt at the filling station and asked us not to cry again that he will wipe our tears. We are here because he invited us today and gave a brand new bus and two tricycles as he promised.”
Similarly, the bus driver, Sunday Ugwu said: I am very happy. Today is the happiest day of my life. I did know that I will get my burnt bus replaced .”
“Of utmost importance in Governor Ugwuanyi’s immediate and kind gestures to the poor victims of the inferno who were almost hopeless is that he has saved souls. The governor has given hope to the hopeless and turned their Yuletide and New Year celebrations from bleak to bright.
“It is only a handy and accessible governor like Ugwuanyi that can promptly visit the scene of the incidents, identify the victims and quickly assist them. In most cases, it is either things or funds meant to assist such victims got diverted or held up in bureaucratic bottlenecks, all in a bid to frustrate the beneficiaries. That was not the case with the victims of Enugu Xmas fire incidents.”
This humanitarian approach, selfless services and swift responses to helpless victims of natural disaster and others in Enugu is Ugwuanyi’s routine and tradition since he assumed office as governor.
The brutalised little girl, Miss Nneoma Nnadi’s own is just one of such Ugwuanyi’s countless timely interventions and assistance to the needy in a trying times. It is not new. It is not political. It is innate in him.