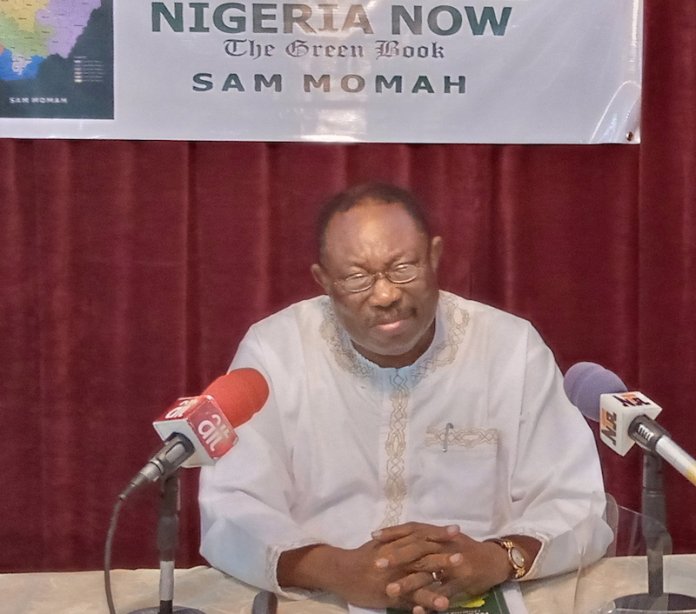 A retired military general, Sam Momoh, has urged President Muhammadu Buhari to lay the foundation of a new Nigeria by restructuring the country.

He also called on the military to use what he called smart suicide “Lovers” (female spy soldiers) to penetrate Boko Haram command and destroy the network of the terror group.

Momah, a major general, disclosed on Wednesday in Abuja while presenting his 12th book titled, “Why We Must Restructure Now” (Nigerian Green Book) to mark his 77th birthday.

Momah noted that restructuring was not synonymous to resource control, but how to solve the problems facing the country, adding that the federal government must organise a constitutional conference where issues affecting the country would be discussed and map out a strategy that would see the country beyond oil.

He stated: “I want to use this occasion to personally request Mr. President, my senior colleague, that the issue of restructuring be given a second thought. He has done so well in all aspects of administration. We know what he has done about checking corruption, we now have customs generating almost N2 trillion yearly. The Treasury Single Account (TSA) has been able to block all the leakages; the anchor borrowers programme is helping agriculture, these are milestone achievements, but they cannot substitute restructuring.

“Being at the helm of affairs at this time requires that he use the opportunity to lay an enduring legacy as a founding father of modern Nigeria. It is through this restructuring that will show what Nigeria of today, tomorrow and everlasting is going to be. So, he should use this opportunity to lay a lasting legacy as the founding father of modern Nigeria.”

Momah noted that Nigeria started with three regions, before it became four regions, and later 12 states and eventually to 36 states, adding that it was still the same foundation that is carrying the 36 states.

According to him, If you build a house of three storeys and you now want to make it 36 without doing something to the foundation, that’s why we are going round in cycle. So, the foundation must be restructured and the only way to restructured is to diversify the economy so that we can give the foundation a broad base to be able to carry the load.

Momah also advocated for a 6-year single presidential and governorship term, adding that it would give the incumbent enough time to complete all projects, while also preventing president/governor from interfering with Independent National Electoral Commission (INEC) and also using state funds for campaign.

He stated: “This will be done by (a) Giving Carte Blanche to state governors to have Community Guards and use their Security Vote for that only. (b) Deny Boko Haram their recruitment source by banning Almajiri system. (c) Express delivery of National ID Card to all Nigerians particularly in the North East. This will facilitate the identification of Boko Haram fighters particularly their leaders because to kill a snake you cut off the head and not the tail as we have been doing so far.