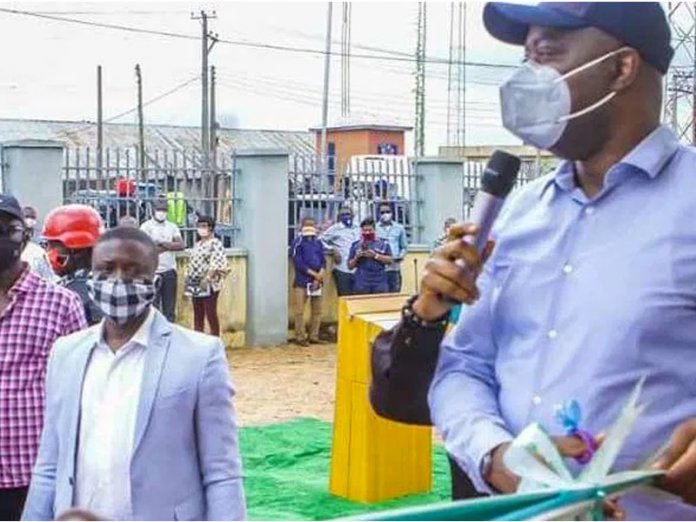 Oyo State Governor, Seyi Makinde, on Saturday, commissioned the upgraded Agbami Isolation Centre in Jericho, Ibadan, declaring that health workers will continue to receive strong support in the fight against coronavirus in the state.

The governor, who was accompanied on the trip to Agbami by his deputy, Engineer Rauf Olaniyan, and other top government functionaries, stated that the welfare of frontline workers in the battle against COVID-19 will remain top on his administration’s agenda.

He said: “I want to also thank health workers, because you are the frontline in this battle, and you have had to work with facilities that are not up to standard but we have been partners in progress as far as lifting our health care delivery system in the state. Please, do not relent. Let us keep doing this together to defeat COVID-19.”

A statement by the Chief Press Secretary to Governor Seyi Makinde, Mr. Taiwo Adisa, quoted the governor as saying that though the Agbami facility was commissioned at the twilight of the last administration in the state, it wasn’t equipped for proper use as an Isolation Centre.

According to him, the said facility was commissioned as a Tuberculosis Centre by the immediate past administration but his government has upgraded it as an isolation centre for COVID-19 patients.
He stated that the building would serve the high-end members of the society who test positive to the virus and are in need of privacy.

According to him,”there is nothing really much to say today apart from the fact that this facility was commissioned at the twilight of the last administration. Before we came in, it was a TB centre at that time. We didn’t know there would be COVID-19 pandemic but here we are dealing with the virus.

“We give the past administration the credit for putting this together, even though it was commissioned when it was not ready. I came here, went inside and there was absolutely nothing inside. Now that we have the pandemic on our hands, it will serve high-end individuals in Oyo State who are not comfortable going to Olodo because they want privacy and comfortability.

“We know some of you have aged parents at home and because we have to give concession for such individuals to self-isolate at home and we monitor them, now we don’t have to do much of that anymore because with the facility here, you can self-isolate.

“You will go inside and we give you the treatment. We will ensure that you don’t infect others and once you have been properly managed, you go back to your various homes.

“I battled COVID-19. It is not a death sentence and it is nothing to be ashamed of. The virus is here with us and will be here for some time to come. It will not disappear two or three weeks from now. So, we have to learn how to live with it. If anyone is feeling sick, there are facilities. We have taken the opportunity of the pandemic to strengthen our health care facilities. When it is no longer here, our facilities will remain and we will maintain them.

“So, it is not a big deal that anyone tests positive to COVID-19 and I am not ashamed of it. I fought the virus and I am up and about now. I pray that as many of us that will fight the virus will come out of it doing very well. Don’t self-isolate at home now. If you are a high-end individual, you can come here. You don’t also need to go and hide at private hospitals where they don’t have the facility, personnel and resources to ensure you have adequate care.”

The governor also stated that the rooms at the Agbami isolation centre have been well-equipped and fixed with oxygen concentrators.

“This facility has been upgraded now and it is now an isolation centre. We have an oxygen concentrator there and you will get the type of care you deserve,” he said.

The governor also appreciated a member of the state’s COVID-19 Task Force and former Chief Medical Director of the UCH, Professor Temitope ALonge and his team for the good job they have done and are still doing in putting up isolation centres.

He said: “I want to thank Professor Temitope Alonge for this work that you and the team have been doing and are still doing. We are quite blessed in Oyo State because we have the resources and people who can hold their own if you take them anywhere around the globe.

“I also thank the people of Oyo State for their support for this administration. If we look at where we are coming from, it has been a challenging environment. When we started the year, we had high hopes. But now, we have to shave off almost 35 per cent of our budget for the year simply because we are faced with a pandemic and economic meltdown. In spite of all of that, with the support of the good people of the state, we have been able to keep moving on.

“We do not take the support for granted. Keep criticising us constructively on what we are doing. Anything we are doing, which you think we can do better, bring it up to us and we will make the necessary adjustments.”

Other officials in attendance at the event include the Head of Service, Mrs. Amidst Ololade Agboola; Professor Alonge and the state’s Commissioner for Health, Dr. Bashir Bello, among others.