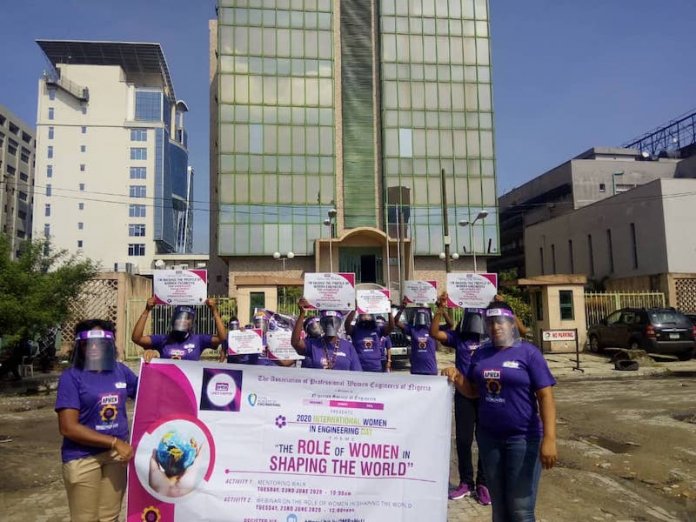 The Association of Professional Women Engineers of Nigeria (APWEN), recently, joined its counterpart across the world to mark the maiden edition of the 2020 International Women in Engineer Day (INWED), designed to bring to bear the contributions of women in engineering development in the society.

The programme with the theme, ‘The Role of Women in Shaping the World’, aside raising the profile of women in the field of engineering, is also aimed at focusing attention on the amazing career opportunities available to the girl-child in the field and eradicate gender steotypes.

It featured an online conference which drew over 300 participants.

The event had in attendance the governor of Kebbi State, Senator Abubakar Bagudu, who was represented by the SSG, Alhaji Umar Babale, the Deputy Chief Whip, House of Representatives, Hon.Nkeiruka Onyejeocha, President of the Nigerian Society of Engineers (NSE), Babagana Mohammed, among others.

In her remarks, the President of the association, Mrs. Funmilola Ojelade, recalled the inauguration of the National Women in Engineering Day in the UK in 2014, by the Women’s Engineering Society (WES); a partnering organisation with The Royal Academy of Engineering, to commemorate its 95th anniversary , adding that since then, it had grown and now recognised internationally due to the interest and enthusiasm demonstrated by the international community of scientists and engineers.

She said the association entered into a productive partnership with the Royal Academy of Engineering, UK, in 2019 with its SHEengineer Invent it, Build it initiative.

According to her, “The project was awarded a grant by the Royal Academy under the Global Challenges Research Funds (GCRF) African catalyst programme which is in phase three presently. It is a capacity building programme of APWEN for female engineers. STEM teachers and public secondary school pupils in JSS one and two in the six geo political zones of Nigeria?”

“Our desire to meet the global requirement of promoting diversity , has provided APWEN with the impetus to be the first association to advocate for girl-child STEM education in the country and also among the first few professional engineering institutions in Nigeria to develop a gender and diversity policy to encourage the inclusive growth of members from diverse background, ” she said.

A former President of the association, Dr. Felicia Agubata who presented her consent note as the SHEEnginer ‘Invent It, Build It’, grant awardee from Royal Academy of Engineering, UK under the GCRF African catalyst phase three, said it came into being after the success of the Invent it, Built it initiative, sponsored by NNPC under the leadership of former GMD, Maikanti Baru.

Engineering though being a male dominated field, she noted that it is imperative to encourage more women to go into it as it will help advance the society positively.

“Male and female are virtually at par in terms of performance. Unfortunately, this parity doesn’t always carry over into the professional world, thus leading to a significant gender gap in the science and technology workforce. Female students shouldn’t rule out engineering. I chose engineering because I loved mathematics and science, and engineering holds real opportunities to change the world.

” We make everything: from bridges to engines, IT systems to cosmetics. Besides, I think women bring critical insights and game-changing perspectives to the table. Equal representation is especially important in engineering, as engineers design products and solve problems that affect humanity. Imagine the greater advances that could occur in engineering if men and women were working consistently together and using all the skill sets in the pool, “she stressed.

Agubata who is the project director, expressed concern that many girls are deterred from entering the STEM workforce due to outdated stereotypes that still exist today and are also made to believe that there is no place for them in the field of engineering.

Given the pervasive nature of such stereotypes, she called on parents and teachers to step in and shield girls from believing that they are less intellectually capable or less suited for STEM.

“Stereotypes can also be challenged by exposing children to examples of women who have succeeded in STEM. Our education system can be redesigned to encourage female students in secondary school by calling on them in class, motivating them, taking their questions seriously and making sure they see the possibilities of STEM careers. There are lesson plans available to address this issue. Introduce policies and incentives for women who want to join a STEM career.”

During the panel discussions, participants took time to make cases on the paths towards driving women in engineering to shape the world, while also encouraging more women to embrace the profession.

The programme presented an opportunity for the association to launch its safety kits including a face shield and hand sanitizers to guide against contracting the dreaded Covid-19; as well as social media profiling of some accomplished women in Engineering in Nigeria.