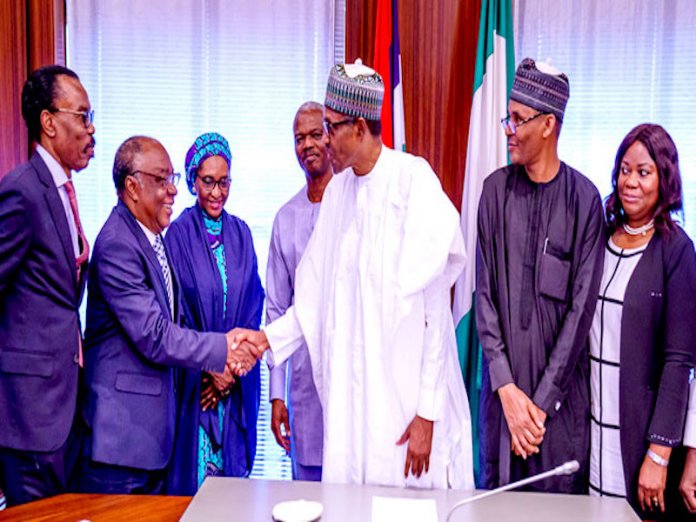 Giving a word of caution ahead of the implementation of the plan at a virtual meeting held yesterday with President Muhammadu Buhari in Abuja, Chairman of PEAC, Prof. Doyin Salami, said if cognisance is not deliberately paid to tackling certain problems, it could hamper the smooth implementation of the package.

Salami, who made the submissions during a presentation on behalf of the council at the meeting, spelt out some criteria that must be observed to avert such problems while implementing the plan.

“PEAC welcomed the Economic Sustainability Plan (ESP) produced by the Economic Sustainability Committee (ESC) headed by Vice President, Prof. Yemi Osinbajo, and adopted by the Federal Executive Council (FEC), but warned that in the implementation of the N2.3 trillion spending plan, there could arise a number of problems which if unattended, could hamper smooth implementation.

“The committee advised among others, that the ESP should be implemented using existing institutional and administrative structures; attention be paid to sources of funding to avoid inflation; ensure that priorities, targets and time limits be set for all projects to make for their completion within the 12-month life-span of the ESP, and where this is not achieved, such projects should be rolled into the new Economic Recovery and Growth Plan (ERGP II),” he said.

Presidential spokesman, Malam Garba Shehu, in a statement, last night, said PEAC also recommended that ESP must promote “export-oriented production strategies;” ensure the use of local resources; curtail post-harvest loses in agriculture now put at between 40-60 per cent and above all, the need to make the economy attractive to “non-debt” private sector-funded investment in order to cut the rising cost of debt services.

The statement listed other recommendations by PEAC to include the need to embark on mass housing schemes to create jobs financed through a public private partnership arrangement; the urgent need to move away from multiple exchange rates to a unified currency exchange rate, and to do all that is necessary to continue to ease the environment of doing business in the country.

Shehu said the council commended the administration of Buhari for implementing several of its past recommendations, and proceeded to present the government with various tough choices to make in its effort to put the country’s economy on a more productive path.

According to him, Salami expressed pleasure over some moves already undertaken by the government, including the review of the Medium Term Expenditure Framework (MTEF) and the 2020 budget following the crisis caused by COVID-19; the deregulation of the pump price of premium motor spirit (PMS); approval of the implementation of the Oronsaye Report on the need to rationalise and restructure federal ministries, departments and agencies (MDAs), as well as the adjustment of the exchange rate of the naira.

He added that Salami suggested that more needed to be done to increase efficiency, coordination and accountability by MDAs.
However, the statement said the president in his remarks, accepted the immediate need to implement the proposal by PEAC on the establishment of public policy coordinating office in the Office of the Secretary to the Government of the Federation, assuring the group that “we will continue to listen to you and do our best.”

The statement also said Buhari appreciated the outstanding support and guidance provided by PEAC so far, describing such guidance as a “tutorial,” and implored the members to do more to help the country exit “our very terrible state of development.”

The president lamented the state of the economy, saying “we are a country characterised by a large population of poor people, serious infrastructure deficit, lack of housing and a vulnerable economy now haunted by the COVID-19 pandemic and collapse of the oil sector and its effect on the Gross Domestic Product (GDP).”
Other members of PEAC, who participated at the meeting, were Dr. Mohammed Sagagi (vice chairman); Prof. Chukwuma Soludo; Prof. Ode Ojowu; Dr. Shehu Yahaya; Dr. Iyabo Masha; Mr. Bismarck Rewane and Dr. Mohammed Salisu (secretary).