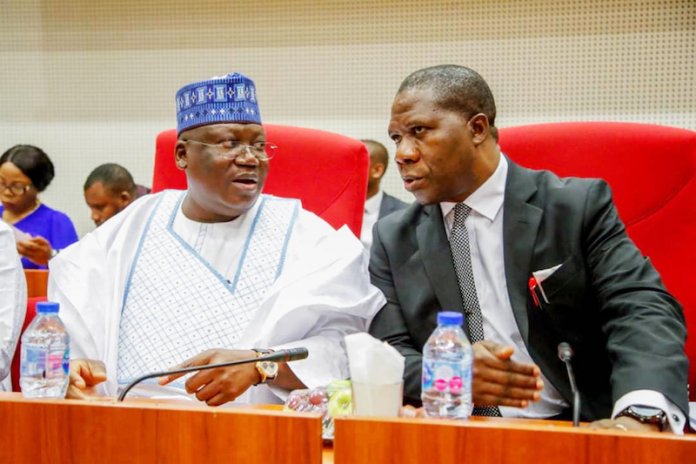 The upper chamber of the ninth National Assembly through its Committee on Judiciary, Human Rights and Legal Matters, has made several moves within a year to turn around the judiciary via legislative activism and oversight functions, reports Deji Elumoye

The 11-man Senate committee on Judiciary, Human Rights and Legal Matters, has taken it upon itself to turn around for good the judicial arm of government.

The committee headed by a former President of the National Association of Nigerian Students (NANS) and ex member of the sixth House of Representatives, Senator Opeyemi Bamidele is the only committee out of the 69 standing committees of the Senate that has only qualified legal practitioner senators as members.

James Manager, Gabriel Suswan, Peter Nwaboshi, Chukwuka Utazi, Hassan Hadeja and Bashiru Ajibola had in the last 12 months of the ninth Senate, made several moves towards strengthening the judiciary.

The first of the committee’s intervention shortly after being inaugurated was the investigation carried out over the alleged invasion of Court room in Abuja by operatives of the Department of State Services (DSS) for a forceful arrest of Omoyele Sowore, (convener of #RevolutionNow), who was then standing trial over alleged treasonable offences.

The investigation was sequel to Senate’s resolution to that effect on Thursday, December 12, 2019, via a motion moved by Chairman of the Committee himself, Senator Bamidele, who came under order 43 of the Senate rules, (personal explanations), to move the motion, saying since the then invasion had raised a lot of concerns from Nigerians, there was no way the Senate as a law-making institution would look the other way.

“The Judiciary must find our voices at this time and moreso, since the courtroom is believe to be a sanctuary that should not be desecrated with such an alleged invasion, thorough investigation needs to be carried out to get the facts of the matter,” he had said.

The investigation carried out a week after, not only put an end to such invasion but led to the release of Sowore on bail by the federal government as ordered by the court of law.

In March 2020, the Committee at a Public Hearing on Internet Falsehood, Manipulations, and other Related Matters Bill, 2019 sponsored by Senator Sani Musa, demonstrated much concerns by putting the bill on the table for Nigerians to speak for or against.

Interestingly at the beginning of the public hearing on Monday, March 10, 2020 at the Senate wing of the National Assembly, the Committee Chairman, told the public that though the bill was sponsored by one of them, preponderance of opinions for or against it by Nigerians, would determine the position of the committee and by extension, that of the Senate on the bill as regards its passage or rejection.

He said: “Our duty here today as a committee at this gathering on further legislative action on Internet Falsehood, Manipulations, and other Related Matters Bill, 2019, is to aggregate views of Nigerians on it and be guided by preponderance of opinions for or against”.

The Committee’s open demonstration of neutrality on the bill that day, paved the way for aggrieved Nigerians to kick against it, leading to rejection reports written against it by virtually all the journalists, who covered the public hearing.

The gale of attacks by Nigerians against the bill from the Executive Vice Chairman of Nigerian Communications Commission, Professor Umar Danbatta to 60 other groups or bodies like the Amnesty International, the Nigeria Union of Journalists (NUJ) etc, made the sponsor of the bill, Senator Sani Musa, to hurriedly leave the venue of the public hearing as only the Nigerian Army and the Supreme Council for Islamic Affairs supported the bill that day.

Also, in May 2020, the committee Chairman in response to social distancing brought about by the COVID-19 pandemic in public arena came up with a bill for legalisation of virtual court proceedings across the country.

According to Senator Bamidele, the bill, which has passed the first reading on the floor of the Senate, when fully considered and eventually passed into law, was a necessity at this time and even in line with modern trend.

“Technology has been adopted as an instrument for speedy delivery of judgments on cases in advanced nations. Many cases are being heard through teleconference and judgments passed through same route.

“Apart from decongesting our courts, it helps during emergency situations as we are experiencing under coronavirus pandemic. Virtual proceeding is expedient to save our nation from anarchy in times of emergency like this.

“Judiciary as an arm of government must move with the tide. As a way of complying with the social distancing policy of government under COVID-19, the President Muhammadu Buhari-led Federal Executive Council now holds weekly meetings through virtual means so that the nation will not suffer good governance.

“The same method has been adopted by governors in many states and I see no reason the judiciary can’t adopt same to entrench the rule of law in the system, because one can’t get justice when activities of courts are suspended indefinitely, because justice delayed is justice denied,” he said.

Also, last month, the committee, expressed concern over the dormancy of the Nigeria Law Reform Commission, which it said, had culminated in the existence of obsolete laws in the country’s statue books. It made the critical observation during the screening of the newly appointed Chairman, Professor Jummai Audi and three other board members, forwarded to the Senate for approval by President Muhamnadu Buhari.

A member of the Committee, Senator Peter Nwaoboshi, said: “This Commission as the body constitutionally saddled with the responsibility of law reforms, ordinarily supposed to be visible but not visible at all”.

Another member of the committee, Senator Ajibola Basiru, said for the Commission to have in its record, only seven attempts of law reforms between 2017 and 2020, shows that it is dormant.

His words: “The worrisome aspect of the Dormancy, are the existence of obsolete penalty clauses in our law books begging for review. Obsolete penalties like N200 fine or six months jail term for offenders of serious crime is ridiculous and not deterrent as it supposed to be”.

A similar “raise the ante charge” was given to the newly appointed President of the Court of Appeal, Justice Monica Dongban-Mensem during her screening by the Committee.

Bamidele, while speaking on behalf of the committee, had told the presidential nominee that the enthusiasm with which Nigerians greeted her nomination and the respect the Senate had for it by suspending its rule for expeditious screening, should not be in vain if eventually confirmed.

“You must demonstrate the required courageous leadership the Judiciary deserves by standing up in fair and fearless manner by the Nigerian people, when it comes to justice. Your Lordship must ensure that Justice is not only delivered but in timely manner, because justice delayed, is justice denied.

“It should not be business as usual, the very reason the Senate and by extension, the National Assembly, is revisiting the budget of the Judiciary, which is less than 1% of the N10.509trillion 2020 budget size for the country,” he said.

He further stressed the opinion that the Committee would look into the budgetary votes of the Judiciary as regards welfare packages for Judges and Justices.

According to him, “The welfare situation of the judicial officers is nothing to write home about. The last time salaries and emoluments of judicial officers were reviewed, was in 2008, the benefits of which have been completely eroded by inflationary trends.

“This sector might go into extinction if the needful is not urgently done, because in years to come, Nigerians may no longer be interested in going into the sector,” he warned.

During consideration and passage of the revised 2020 budget, Bamidele as Chairman of the Committee, was on hand to kick against N11billion slashed from the original votes earmarked for the Judiciary in the initial 2020 budget passed in December 2019.

The reduction in the budgetary votes, according to him, would further worsen the already pathetic situation of the Judiciary as far as underfunding is concerned.

With the various interventions by the Senator Bamidele-led judicial committee, the third arm of government is in for better days, which will in turn enhance the timely delivery of justice to the citizenry.

My People Now Live in Fear, Says Shehu of Borno