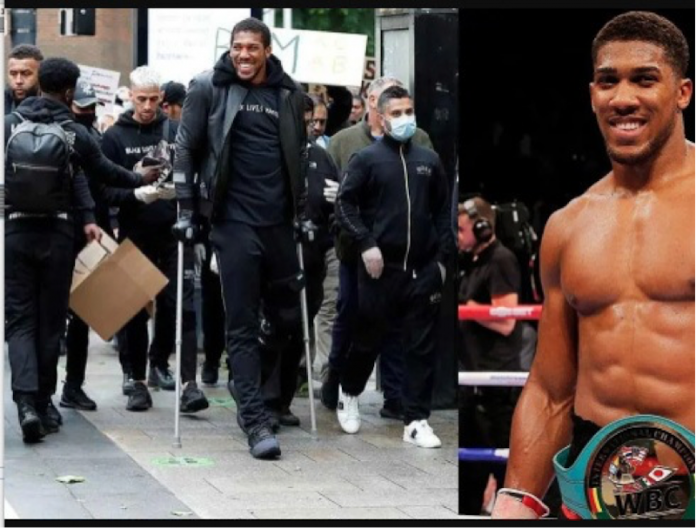 Anthony Joshua’s injured leg will not prevent his next fight against Kubrat Pulev or his plan to face Tyson Fury, promoter Eddie Hearn said.

Joshua wore a brace over his left knee and had a crutch when he spoke at a Black Lives Matter last weekend.

“When you’re on crutches with your leg in a brace it is never great, but it’s not something that will affect his 2020 career or his career at all,” Hearn told Sky Sports.

“He will have the brace on for three or four weeks just to make sure he is good to go to resume training.

“He tweaked the inside of his knee. He’s had scans. No surgery, so that’s good news.
“He’s got to make sure he doesn’t do any running or heavy work over the next few weeks.”
Joshua and Fury, who own every major heavyweight belt between them, have agreed financial terms for two fights in 2021 to decide an undisputed champion.

But Joshua’s next defence of the IBF, WBA and WBO titles is expected to be against his mandatory challenger Pulev, with the UK still the priority location.

Fury is set to face Wilder again in a third WBC title fight, while Dillian Whyte has also lined up a mandatory shot at the WBC belt by February 2021.

“In our minds, Joshua versus Pulev happens in November,” said Hearn.

“We know that Deontay Wilder’s side are working on the Fury fight. We have Dillian Whyte hopefully fighting at our headquarters in August against Alexander Povetkin.

“There are talks to stage the Pulev fight around November. That’s the fight that is next. It’s the IBF mandatory.”