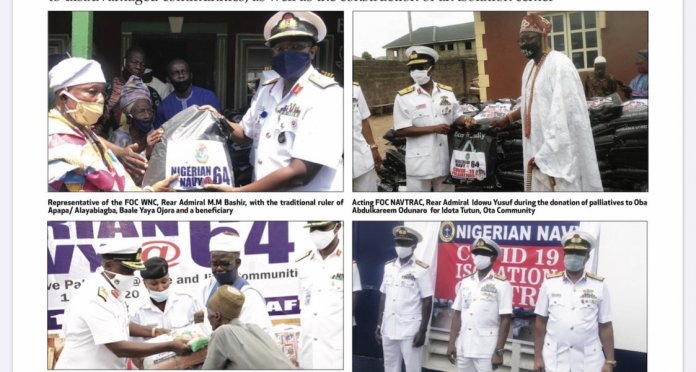 Chiemelie Ezeobi writes that although the Nigerian Navy’s primary responsibility is protecting the nation’s maritime domain, the service is also at the forefront of championing the fight against the COVID-19 pandemic by distributing palliatives and personal protective equipment to disadvantaged communities, as well as the construction of an isolation center

To support the Federal Government’s efforts to cushion the effect of COVID-19 pandemic, the Nigerian Navy recently championed the cause in its respective communities across the country. As directed by the Chief of Naval Staff (CNS), Vice Admiral Ibok-Ete Ibas, these were an integral part of the activities carried out by the navy to mark its 64th anniversary.

From sharing palliatives, Personal Protective Equipment (PPEs), as well as hand sanitisers, at their host communities in Abuja Municipal Councils to those around the Eastern and Central, Naval Commands as well as other units of the navy across the country, they also shared at Nigerian Navy Provost and Regulatory School, Makurdi, Benue State and the Nigerian Navy School of Armament Technology, Kachia, Kaduna, among other schools under the NAVAL Training Command (NAVTRAC).

In Lagos, the Western Naval Command (WNC) led by its Flag Officer Commanding (FOC), Rear Admiral Oladele Daji kicked off distribution of palliatives such as care packages like the PPE, sanitisers, food stuff and condiments to cook it.

The distribution to over 1000 families in Lagos was done with a view to ameliorate their sufferings due to the COVID-19 pandemic. According to the WNC Command Information Officer (CINFO), Commander Tom Otuji, a breakdown of the palliatives distributed includes 340 households in Ajegunle; 350 in Tongeji Island and 350 other households in Imore, a riverine community in Ori-Ade Local Council Development Area of Lagos State.

In Ajegunle, speaking at the palace of the traditional ruler of Apapa/ Alayabiagba, the CNS explained that the gesture which was part of the navy’s Corporate Social Responsibility (CSR), was also in recognition of the partnership of the host community.

The CNS who was represented by former WNC Chief Staff Officer, Rear Admiral M.M Bashir, noted that it was not the first time Alayabiagba, being one of the command’s host communities, would be benefiting from the navy, recalling how residents had also benefitted from its medical outreaches in previous years.

He said: “The Nigerian Navy as a responsive organisation that takes into recognition the partnership with host communities, especially on the general populace, in carrying out our activities, considers it a role to impact on their lives, because they also have a responsibility to assist us in our operation.

“We see this as a responsibility for us to always reach out to communities. In this particular case, concerning the COVID-19 pandemic, we need to reach out to the vulnerable in the community, by way of supporting them.”

While applauding navy’s gesture, the traditional ruler, Bale Yaya Ojora, assured that he would ensure that the palliative reached those assigned to get them, as had been done in previous presentations by other corporate bodies and private individuals.

Also present at the presentation of the palliatives was the Secretary, Ajeromi Ifelodun Local Government Area, Remi Bela, who on her part, appreciated the navy, while describing it as a practical definition of military/ civilian relationship.

At Idota Tutun, an Ota community in Ogun State, the Naval Training Command (NAVTRAC) extended a hand of fellowship by donating and distributing food stuff and PPEs to locals.

The command gave out 350 bags containing rice, noodles, vegetable oil, condiments, beans as well as hand gloves and face masks to the community that hosts the Nigerian Navy School of Music (NNSM), Ota.

The gifts were handed over to the Ota monarch, Oba AbdulKabir Obalanlege at the community hall with few guests present. Handing over the items, the acting FOC, NAVTRAC, Rear Admiral Idowu Yusuf said the command thought it wise to appreciate the community for all their support to the NNSM.

He said: “The current global COVID-19 pandemic affecting the country has made the Nigerian Navy to modify this year’s celebration. This informed the selection of Idota Tutun community, Otta, as one of the several communities to benefit from the CNS’s COVID-19 palliatives to alleviate the hardship caused by this global pandemic on our citizens.

“It was designed to assist 250 households with assorted foods and PPEs including hand sanitisers, hand gloves and face masks. The school has played a lot of roles and the community itself has assisted our naval personnel. Some information we get from the community sometimes help in taking care of security operations, while our presence has also assisted in curbing criminal activates because of the support we have got from the people.”

In his remarks, Oba Obalanlege who was represented by the traditional ruler of Idota Tutun, Oba Abdul-Akeem Kolawole said: “For the Nigerian Navy to come to the aid of our people at this point in time is highly appreciated. We are happy that we have them in our community. What they have brought will be distributed across the 40 CDAs in this community and we are going to ensure urge must vulnerable such as widows, orphans and aged people get them.”

Also reaching out to its other communities, the navy distributed foods items, PEP, sanitisers and other palliatives to host communities in Abuja. The exercise took place in Kuje and Jiwa communities, as well as Abuja Municipal Area Councils.

The Director of Administration, Naval Headquaters, Rear Admiral Jatau Luka, who represented the CNS, at the event, said the palliatives were aimed at reaching out to vulnerable communities.

He said the CNS directed for the conduct of palliative distribution to members of the public in host communities within the FCT and other commands as it underscores the commitment of the NN to its CSR as well as support to the efforts of the FG in mitigating the impact of the pandemic on the less privileged citizens. ”

Also as part of its contribution in tackling the COVID-19 pandemic, the NN last week Monday inaugurated a 40-bed space isolation centre at the Naval Dockyard, Victoria Island, Lagos for naval personnel who are asymptomatic to COVID-19.

The CNS, who was represented by the FOC WNC, Rear Admiral Daji, said the centre would be used to isolate positive but asymptomatic personnel.

Stressing that it was part of NN’s proactive measure to curb the spread of the virus, he noted that over 1,500 NN personnel in Lagos have been tested prior to the completion and inauguration of the centre. Ibas said the NN could not afford to take chances considering the nature of their job which makes officers and men stay in enclosed ships for long periods at sea.

According to Ibas, the navy has been in contact with the Lagos State COVID-19 response team and the National Centre for Disease Control (NCDC) since the conception stage of the facility, adding that such collaborations would continue.