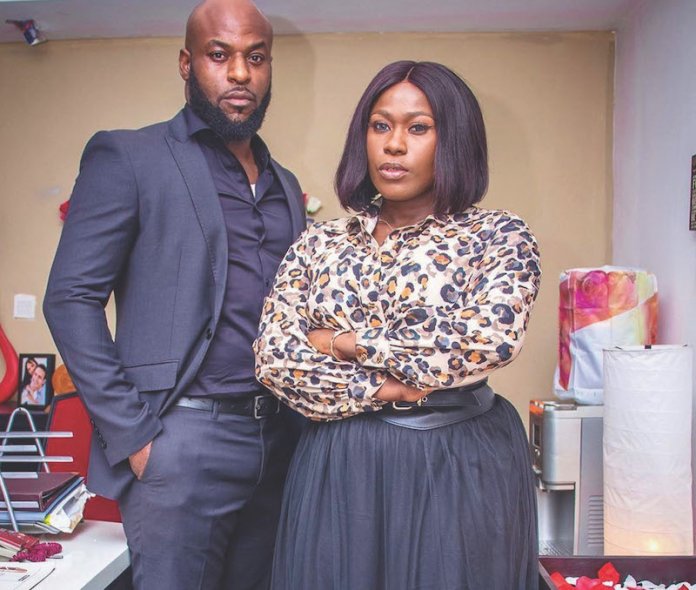 In between a fight in a good and bad relationship comes only one woman for the job and that’s Dr. Love, played by Nollywood actress turned director/producer, Uche Jombo. She commenced production of the television series back in January and has been working round the clock to get the first episodes running. The screen star has been posting snippets and set pictures from behind the scenes of her upcoming series.

Just recently, the actress released the teaser for Dr. Love, which will premiere exclusively on ROK, Nigeria’s streaming platforms. Directed by Yemi Morafa, the series follows the adventures of a psychologist who helps couples mend their relationships. Expected to be refreshingly interesting, this Uche Jombo Studios Production was written by Joy Isi Bewaji, a screenwriter known for Seven and a Half Dates, City Crimes, and Love Potion.

While it is not quite clear where the plot will eventually take its characters to, it is however believed that Jombo is thinking outside of the stereotypical Nollywood conventions and attempting to gain millennial and Gen-Z attention by casting straight actors who have also built major personal brands on social media platforms like Instagram. This in part explains why Steven Chuks, the comedian who has gained a cult following for his portrayals of Igbo family life has a support character on the new show and why she picked Kalu Ikeagwu as a leading man.

The last time she was in the news for her work, Jombo flipped the script and ticked off a major Nollywood milestone, directing her first film project, with ‘Heaven on my Mind’ which premiered on December 7th, 2018. Jombo is back at directing again, this time on the small screen. Jombo’s film was a moderate success at the box office and as such other things have kept her away from her fans’ screens and from the director’s chair behind them.

Jombo is one of the more believable actresses from Nollywood’s glamour age and she continues to create projects and explore her potential through new mediums. It is expected that Dr. Love becomes a streaming sensation for both Rok Studios and Uche Jombo Productions. Just as she does on set, the actress has brought her drive and passion to bear on this project she described as one dear to her heart.

Jombo ventured into the Nigerian movie industry in 1999 in the movie Visa to Hell. As a screenwriter she has written and co-written several movies some of which include: The Celebrity, Games Men Play, Girls in the Hood, A Mother’s Fight, Unconditional, A Time to Love, Be My Wife, and A Time to Love. Jombo went on to produce films such as Nollywood Hustlers, Holding Hope and her work Damage which deals with the issue of domestic violence. She has risen to become one of the most sort-after screen goddesses in the entertainment industry today.

However, she didn’t just get all of the fame and fortune in one day but through her consistency and tenacity over the years which she has proved. Months back, the veteran actress reached a milestone of 20 solid years in the film industry. The occasion provided her as usual the space to effusively recount her success and journey so far. In her celebratory post, she thanked everyone who had given her a chance and partnered with her on projects. The mother of one had also expressed her interest in contributing more to Nollywood as she went down memory lane into her struggling days down to achieving stardom.

She wrote: “Today 20 years ago I made my debut in a Nollywood film (Visa to Hell). What a journey it’s been…worked my way from playing lead in my first 2films to waka pass roles, supporting roles, to no role, moving to writing the roles I wanted as a script writer, back to leading roles with (Games Men Play which I co-wrote with @ememisong) to eventually investing back into this industry that changed my life through @uchejombostudios (one of the actors with the highest number of self-funded films) I want to say a big thank you… everyone who gave me a chance, worked with me, partnered with me on projects and most importantly you. …My true ujlovers thank you.

“With over 200 films as an actor, over 30films as a screenwriter, over 30 films as an executive producer, lately 6 films as a director and still going!!! I made it this far because of you and we only just began. Join me in raising a glass to #UJ20yearsinNollywood… I look forward to many more years contributing to taking Nollywood where it should be.” Prior to this moment the actress had addressed disrespectful actors in the industry.

Jombo who is not shy to speak her mind on burning issues in society and the industry had revealed that she personally does not like disrespectful people even if they are talented or not. She then addressed the fact that some young actors have no regard for veterans and even try to insult them with statements like, “you are getting old”.