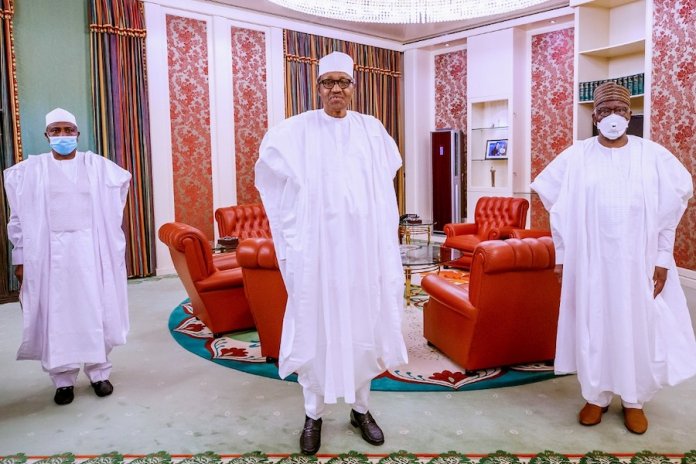 Omololu Ogunmade in Abuja, Francis Sardauna in Katsina and Onuminya Innocent in Sokoto

Bandits have again killed 14 people and kidnapped four others, including a Customs officer in Faskari Local Government Area of Katsina State.

This is coming as the Sokoto State Governor Aminu Waziri-Tambuwal and that of Kaduna State, Malam Nasir el-Rufai, held a crucial meeting with President Muhammadu Buhari at the presidential villa yesterday to discuss issues of banditry and insecurity in their states.

The hoodlums, who launched the fresh onslaughts on Ungwan Gizo, Sabon-layin Galadima, Mai Gora and Mairuwa, according to residents, stormed the villages late on Thursday night.

A resident, Aliyu Lawal, who confirmed the development to THISDAY in Faskari yesterday, said the armed bandits riding on motorcycles killed 14 people and injured six others in Ungwan Gizo.

“The bandits numbering about 150 riding on motorcycles entered Ungwan Gizo and killed 13 and injured six people. They also kidnapped two people including a Customs officer.

“The injured persons are currently receiving treatment at Funtua General Hospitality. That same night, they went ahead and entered Sabon Layin Galadima and Maigora, destroyed their shops and catered away with their properties. Some of the bandits also went to Mairuwa and kidnapped two people.

“We are calling for urgent military intervention because these people (bandits) have taken over this place. These attacks have been going on for the past 10 years.”

Efforts made to reach the State Police Public Relations Officer, SP Gambo Isah, for comments were futile as at press time.

Similarly, the hoodlums had last March, killed 73 people and rustled hundreds of cattle belonging to residents in Dutsin-Ma, Safana and Danmusa Local Government Areas of the State.

The Sokoto State Governor Aminu Waziri-Tambuwal and that of Kaduna State, Malam Nasir el-Rufai, yesterday held a crucial meeting with President Muhammadu Buhari at the presidential villa yesterday to discuss issues of banditry and insecurity in their states.

The governors, who met with the president, separately, behind closed doors, expressed concern about the rampaging bandits in the North-west and demanded for greater federal interventions. Both Sokoto and Southern Kaduna have become the hotbeds of banditry in recent times.

Tambuwal’s visit to the president was spurred by the killing of no fewer than 74 people by bandits that attacked Garki, Dan Aduwa, Kuzari and Katuma towns, all in Sabon Birni Local Government of Area of the state on Wednesday night.

Tambuwal said he was particularly concerned about the scourge of banditary in the South-Eastern part of Sokoto State, and had come to ask the president for assistance in mobilising men and resources promptly to halt the problem.

The governor said he also asked the president for more military interventions in Sokoto to effectively combat the activities of bandits.

He said he equally solicited for logistics and support for the internally displaced persons (IDPs), in the state.

He said, “I requested to see the president yesterday (Thursday) and he granted me audience today (Friday).

“Apart from the previous attacks, only two days ago, through banditry attacks, we lost about 74 people in a very heinous and dastardly act of aggression from the bandits.”

El-Rufai expressed concern over Buhari’s order for military offensive in Sokoto, saying the directive could force the bandits to relocate Kaduna.

He said whereas the menace of banditry in Sokoto State only generated public attention few days ago, the trend had been a norm in other North-west states of Zamfara, Kaduna, Niger, and Katsina over the years.

He said, “We’ve been dealing with this issue and our concern now is with the operations in Sokoto and Zamfara, many of the bandits will move to Kaduna, this is part of the reasons I’m here. I’ll be meeting with the Minister of Defence and the service chiefs to try to get more military activities, some operations to be strengthened.

“I must say that they’ve been doing very well. They’ve supported us, but this banditry is a big problem. It’s going to affect agriculture unless it is dealt with and I believe that it will be dealt with.

“The Chief of Air Staff has assured me that whatever will be needed to be done to wipe out the bandits, to enable our farmers to go to farm as the rains advance, will be done. We are confident that things will get better.

“It’s most unfortunate that we’ve had to deal with it in the North-west in the same way that Boko Haram ravaged the North-east, these bandits are also becoming a serious problem in the North-west, but the problem is being addressed.”