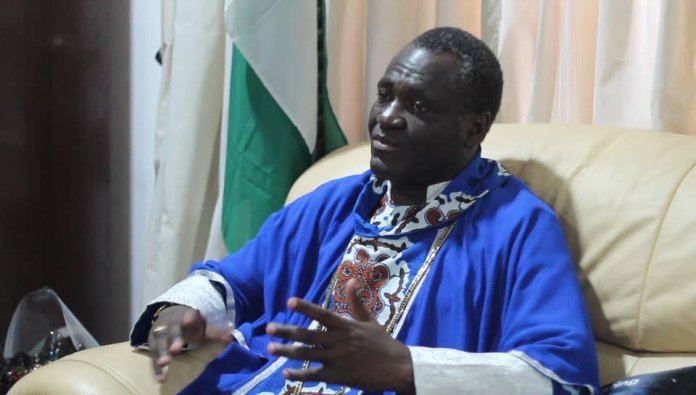 The Founder and General Overseer of Resurrection Praise Ministry of Africa Worldwide, a.k.a Jehovah Sharp-Sharp, his eminence, Archbishop Samson Benjamin, has accused his colleagues calling for the reopening of churches as part of the ease in the lock-down within the pandemic, of being only concerned with tithes and offerings and not the lives of the public.

He made the remarks recently while speaking with THISDAY in his church premises in Lagos state.

According to him, “There are moments you call normal and abnormal moments that probably are caused by events that you did not plan for. This COVID 19 pandemic has actually changed almost everything in everybody’s life.

“Easing the lock-down in places like Abuja, Lagos, Kano and Ogun state is still not the best because the society we are is not used to obeying laws. But at the same time, it requires a whole lot of planning to be able to lock-down.

“Government is actually supposed to provide a palliative for the people that depend on daily wages, in other for them to obey the law of both federal and state governments.

“So, I am not against those saying ‘why do you open the markets and lockup the churches’, because the government is not able to provide enough palliative.

“When we were giving out palliatives, we heard people say that it is “better to die of Corona-virus than to die of ‘Corona-hunger in their houses”. And I think that was what informed the government to ease the lock-down.

“I would also say that churches should not make a case out of this. I think this outcry has to do with their tithes and offerings. But christian leaders should be more concerned about our followers.

“For me, I gave my members the authorization to use their tithes and offerings to help their neighbours. Honestly if I have my way, we should go back to complete lock-down, if we want to save lives of more people.

“But this has to do with the government, because if we want to do a complete lock-down, the government should be able to come up with proper arrangement for palliative for the vulnerable.

“My colleagues in alter clamouring for churches to reopen, to be very honest, it is wrong now. The churches are supposed to be thinking of ways to get involved in ameliorating the plights of the poor people at this critical moment.

“They are complaining that why the markets are opened and churches are locked. They had to open these markets for people to go and buy food, but in the church we don’t sell tomatoes, rice or beans.

“What we do in the church is to have fellowship with God and go. To be very honest, the truth behind the clamour for churches to open is because of tithes and offerings they get.

“If there is a way for the normal tithes and offerings to be going back the way it used to before the lock-down, nobody would clamour for churches to open. Right now, some men of God have gone bankrupt because they don’t get the offerings and tithes.

“What stops them from going to preach on the streets? I still do morning cry and evangelize to people sitting in their homes and on the streets. We preach that God is omnipresent, so what happened to that belief we used to give to people.

“Whereas, we’re making it seem like if they don’t come to the church, they can’t get to God. That’s not true. The issue is that we are even lacking in our responsibility as spiritual fathers to people.

“And I still clamour for government to avoid calling off the lock-down on social gatherings, parties, churches or mosques. It would be a very big mistake on the side of the government.

“Rather let us think of how we would create better palliative for the people.”