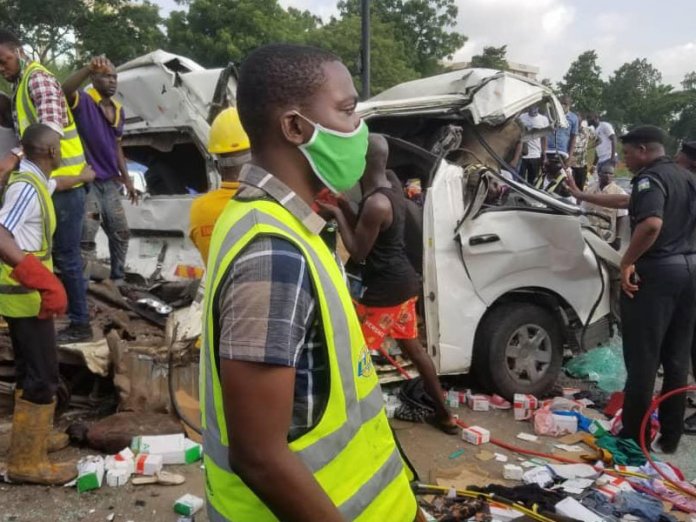 A tanker loaded with petrol yesterday rammed into a bus and a car on the Otedola Bridge area of Lagos State, killing one person and severely injuring six others, including a nine-year-old boy.

While a female passenger died on the spot, others sustained severe injuries from the clash and were rushed to Lagos State Trauma Centre for treatment.

It was gathered that the tanker, fully loaded with fuel, had a brake failure before it rammed into the interstate Mazda bus.

A team of security agents, comprising the police, Lagos State Transport Management Agency (LATSMA), Federal Road Safety Corps and officer in charge of Lagos State Traffic (MOTOPOL), CSP Titilayo Oriyomi Ilesanmi, and her personnel, were deployed in the area on rescue operations and to clear the traffic.

The affected vehicles were removed from the road by Lagos State Emergency Management Agency (LASEMA), while MOTOPOL officers helped to ensure the free flow of traffic.

THISDAY gathered from police sources that even though the accident was not caused by the interstate driver, he would be prosecuted for violating the lockdown order.

Confirming the accident, LASEMA Director-General, Dr. Olufemi Oke-Osanyintolu, said emergency workers worked assiduously to contain the situation.
He said: “Upon the arrival of the LASEMA Response Team (LRT) at the incident, it was discovered that a tanker loaded with petrol rammed into a bus and a car.

“Adult males and a child were severely injured by the impact and were attended to by the agency’s officials before being taken to a trauma centre for further treatment.
“Unfortunately, one adult female lost her life at the scene and her remains have been transported to the mortuary. Recovery of the three affected vehicles from the road has been carried out by the agency’s light tow truck.”