As part of efforts at making state legislature and judiciary more independent, President Muhammadu Buhari on Friday signed an Executive Order that ensures finances of the two arms of government at the state level get directly to them.

The new order is a brainchild of a Presidential Implementation Committee constituted to fashion out strategies and modalities for the implementation of financial autonomy for the states’ Legislature and Judiciary in compliance with section 121(3) of the Constitution.

The new order tagged Executive Order No. 10 of 2020 for the implementation of Financial Autonomy of State Legislature and State Judiciary Order, 2020 is aimed at strengthening the financial autonomy of the judiciary and legislature at the state level.

According to a statement issued by Dr Umar Jibrilu Gwandu, Special Assistant on Media and Public Relations Office of the Attorney-General of the Federation (AGF) and Minister of Justice, the new order will further make the two arms more independent and accountable in line with the tenets of democracy.

“The President signed the Executive Order number 10 into law based on the power vested in him as the President of the Federal Republic of Nigeria under Section 5 of the Constitution of the Federal Republic of Nigeria 1999 (as Amended), which extends to the execution and maintenance of the Constitution, laws made by the National Assembly (including but not limited to Section 121(3) of the 1999 Constitution (as Amended), which guarantee financial autonomy of the State Legislature and State Judiciary”, Gwandu said.

According to the statement, the Order provides that “The Accountant-General of the Federation shall by this Order and such any other Orders, Regulations or
Guidelines as may be issued by the Attorney-General of the Federation and Minister of Justice, authorise the deduction from source in the course of Federation Accounts Allocation from the money allocated to any State of the Federation that fails to release allocation meant for the State Legislature and State Judiciary in line with the financial autonomy guaranteed by Section 121(3) of the Constitution of the Federal Republic of Nigeria 1999 (as Amended)”.

Gwandu noted that based on the new order all states of the federation shall include the allocations of the two Arms of Government in their
Appropriation Laws.

Article 6 (1) provides that “notwithstanding the provisions of this Executive Order, in the first three years of its implementation, there shall be special extraordinary capital allocations for the Judiciary
to undertake capital development of State Judiciary Complexes, High Court Complexes, Sharia Court of Appeal, Customary Court of Appeal and Court Complexes of other Courts befitting the status of a Courts.” 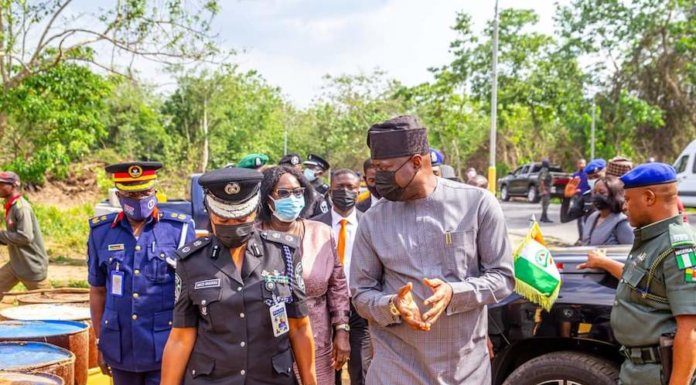