Davidson Iriekpen writes that the senator representing Anambra South senatorial district, Ifeanyi Ubah, can finally settle down to his legislative duties after the Supreme Court rested cases challenging his status as a senator

With two petitions at the tribunal, one at the High Court, three at the Court of Appeal and two at the Supreme Court, the contest for the Anambra South senatorial seat was certainly the most litigated in the history of the contest into Senate. At the end, Senator Ifeanyi Ubah triumphed against all odds.

This was the case last Wednesday when the Supreme Court finally put an end to the legal battle to unseat Ubah. Delivering judgment on the two appeals brought by Chief Chris Uba and Dr. Obinna Uzoh, the five-man panel led by Justice Sylvester Ngwuta unanimously held that the High Court of the Federal Capital Territory which last January sacked him from the Senate, lacked territorial jurisdiction to entertain the case.

The panel added that since the cause of action emanated from Anambra the FCT court lacked the jurisdiction to hear the case. It consequently dismissed the appeals.

Ubah made history during the February 2019 general election by contesting on the platform of a relatively unknown party, Young Progressives Party (YPP) to sack the incumbent senator, Senator Andy Uba of the the All Progressives Congress (APC), who at the time was the Anambra State Chairman of the President Muhammadu Buhari Campaign Council. The Capital Oil boss polled 87,081 votes to defeat the candidates of the Peoples Democratic Party (PDP), APC, and All Progressives Grand Alliance (APGA), Chief Chris Uba, Andy Uba, Nicholas Ukachukwu, who polled 52,462, 13,245 and 51,269 votes, respectively.

The senator left APGA for YPP after the leaders of the former disqualified him for the primary election of the party to pave the way for the wife of the late leader of the party, Mrs. Bianca Ojukwu, who also showed interest in the seat.

Both Chris Ubah and Andy Ubah did not take the defeat lightly. They proceeded to the Election Petitions Tribunal and Court of Appeal where they were roundly defeated.

Just as he was settling down to his senatorial duties, last January the media was agog with news that he had lost his seat following a court ruling by an FCT High Court in Abuja, nullifying his election on the grounds that he forged the secondary school certificate he presented to the Independent National Electoral Commission (INEC) to contest the February 23, 2019 senatorial election on the platform of YPP.

Dr Obinna Uzoh, whose name was not even on the ballot, sneaked into the FCT High Court with a suit, alleging that the National Examinations Council (NECO) secondary school certificate the senator presented to INEC to contest the Anambra South senatorial election was forged. In the suit, he also argued that the YPP which did not conduct the primary election for its candidates for the Anambra South senatorial election, should be disqualified.

In his judgment, Justice Bello Kawu nullified Ubah’s election on the grounds that he forged the secondary school certificate he presented to INEC to contest the February 23, 2019 senatorial election. The judge declared that the 2nd defendant in the suit, YPP, did not have the locus standi and should not have participated in the February general election for Anambra South senatorial zone for its inability to conduct a primary election. He also declared that Uzoh is the actual winner of the election having come second in the general election, and having disqualified the 1st and 2nd defendants for non-compliance with the provisions of the Constitution of the Federal Republic of Nigeria, 1999 (as amended) and the Electoral Act, 2010 (as amended).

The judge therefore, ordered the 3rd defendant, INEC to issue a Certificate of Return to Uzoh within 48 hours as the duly elected senator for Anambra South senatorial district, being the candidate of the PDP and having scored the highest number of valid votes cast. He also ordered the Senate President and the Clerk to the National Assembly to swear in Uzoh as the senator representing Anambra South senatorial district within 48 hours.

Dissatisfied, Ubah appealed to the Court of Appeal to set aside the judgment which he insisted occasioned grave miscarriage of justice against him. The senator who canvassed four grounds of appeal, maintained that he was denied fair hearing by the trial court, adding that he was not served with the processes filed in the suit or any hearing notice in respect of the suit. He also argued that the FCT High Court lacked the territorial jurisdiction to hear and determine a pre-election matter that arose from election that held in Anambra State.

In a unanimous decision by a three-man panel of justices led by Justice Stephen Adah, the appellate court voided the judgment. It held that the April 11, 2019 judgment was based on incompetent processes. It noted that not only were the originating summons not duly signed by any legal practitioner as required by law, but that the High Court Rules made it mandatory that such legal document must be signed.

Justice Adah who read the lead judgment, said the High Court acted wrongly when it dismissed a motion Ubah filed to draw its attention to anomalies in the processes and the fact that he was not served with a copy of the suit that led to his removal from the Senate. He said the lower court had no powers to set-aside any of its order or judgment that is a nullity.

The appellate court judge held that Ubah’s suit was not caught up by section 285 of the 1999 Constitution which made it mandatory that an appeal must be lodged within 14 days after judgment was delivered. Besides, he said he found no evidence that Ubah was served with any hearing notice before the trial court delivered judgment against him.

It further held that the Abuja High Court lacked the territorial jurisdiction to entertain the suit that bordered on an election that was conducted in Anambra State.

“The lower court clearly had no jurisdiction to entertain that matter. Its decision in the case, therefore, amounted to a nullity and must not be allowed to stand. The decision being a nullity, the Appellant was right to appeal against it. The appeal of the appellant is hereby allowed,” it further held.

Aside vacating the judgment of the High Court, the Appeal Court issued an order of perpetual injunction restraining the Clerk of the National Assembly from giving any effect to it. It further awarded cost of N250,000 each, against the plaintiffs that filed the suit at the lower court, Mr. Anani Chuka and the senatorial candidate of the Peoples Democratic Party (PDP), Dr. Obinna Uzoh, who was a beneficiary of the judgment.

But Chris Uba and Uzoh appealed to the Supreme Court. During the hearing of the appeals, Uba’s lawyer, Chief Akin Olujimi, (SAN) and Chino Obiagwu (SAN) for Uzoh, urged the apex court to set aside the decision of the Court of Appeal, insisting that the FCT High Court had territorial jurisdiction over pre-election matters. However, Ifeanyi Ubah’s lawyer, Dr. Onyechi Ikpeazu (SAN), urged the apex court to dismiss the appeals.

In its verdict, the Supreme Court disagreed them, and consequently, dismissed the appeals on the grounds of lack of territorial jurisdiction on the part of the FCT High Court.
With the end of the case, while Ubah can now settle down and be better focused in delivering his electoral promises to his constituents, Uzoh, his counsel, Eziafa Enwedo, and three others who orchestrated the case are left to lick their wounds following the slamming of a six-count charge against them at the Federal High Court in Abuja by the police for alleged forgery.

Ubah made history during the February 2019 general election by contesting on the platform of a relatively unknown party, Young Progressives Party (YPP) to sack the incumbent senator, Senator Andy Uba of the the All Progressives Congress (APC), who at the time was the Anambra State Chairman of the President Muhammadu Buhari Campaign Council. The Capital Oil boss polled 87,081 votes to defeat the candidates of the Peoples Democratic Party (PDP), APC, and All Progressives Grand Alliance (APGA), Chief Chris Uba, Andy Uba, Nicholas Ukachukwu, who polled 52,462, 13,245 and 51,269 votes, respectively

editor - June 7, 2020 1:44 am
15
How time flies. When Major Abubakar Umar was appointed military governor of Kaduna state by Gen Ibrahim Babangida in 1985, he was just approaching... 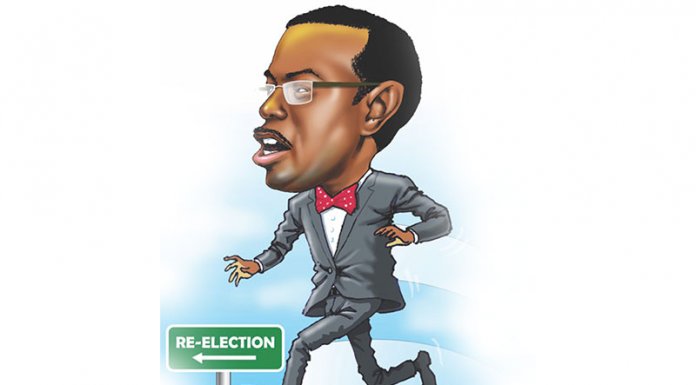