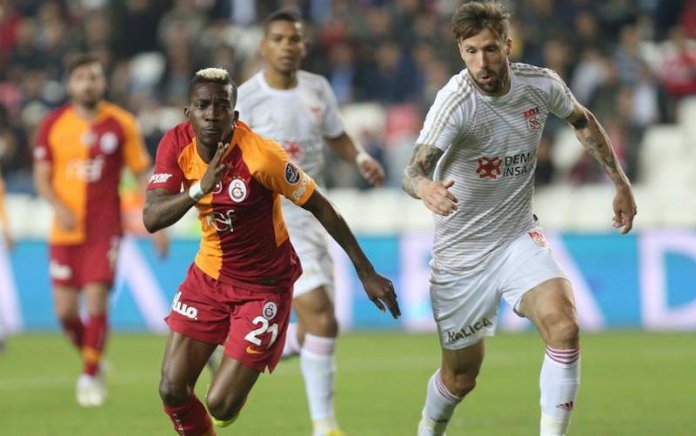 Having failed to establish himself at French side, Monaco, Henry Onyekuru returned to Galatasaray of Turkey for a second spell in the January transfer window where he made seven appearances and scored one goal, culminating in the Turkish side’s desire to have him on a permanent basis. With Olympiakos of Greece now entering the fray, the Nigeria is torn between Olympiakos and Galatasaray

Greek Super League giants Olympiakos are working on a deal to sign Nigeria international,ß Henry Onyekuru, according to Turkish newspaper, Milliyet via Fosoline, Greece says Olympiakos want to sign the striker from Monaco in the summer transfer window.

The former Everton star returned to Galatasaray for a second spell in the January transfer window and has gone on to make seven appearances in the Turkish Super Lig, scoring one goal against Fenerbahce.

The Lions want to extend the Nigerian’s loan deal for another season but the Principality outfit have made it clear they will only entertain offers for a permanent sale.

Onyekuru, who is currently on loan at Galatasaray from Monaco, has experienced some resuscitation at the Turks Telekom Arena after failing to establish himself in France.
He made seven appearances, registering a goal and an assist before the league was put on hold due to Covid-19.

Following his exceptional output at Galatasaray last season, where he was an instrumental figure towards propelling the Turkish Giants to a league and cup double, Onyekuru was a man in demand come the summer.

Having racked up 16 goals and six assists for Fatih Terim’s Gala while on loan from Everton, who he never played for due to work permit issues, AS Monaco pounced, signing the Nigerian international from the Toffees in a deal worth £12 million.

On the surface, this deal was hugely exciting as Onyekuru looked set to complement Monaco’s fellow attacking weapons like Islam Slimani, Wissam Ben Yedder, Aleksandr Golovin and Jean-Kevin Augustin beautifully. In reality, his time with the Monegasques has been anything but smooth sailing, which is largely through no fault of his.

Not helped by Monaco’s woeful start to the season, which forced Leonardo Jardim to switch to a back three, this meant there was no natural fit for him in the side, for Slimani and Ben Yedder took the striking roles and wingers were no longer used, just wingbacks.

At his best when playing on the left flank or through the middle, Jardim’s setup has certainly not aided his cause to stake his claim. Obviously needing time to adapt to his new environment and some injury issues didn’t help his cause either, as he’s only featured four times totalling 160 minutes of action.

A very exciting player who can hurt opponents in a variety of ways with his explosive, game changing set of attributes, he’s certainly a nightmare for defenders to come up against.

Blessed with scintillating pace, acceleration and agility, these characteristics ensure he’s such a threat with and without the ball. Firstly, when embarking on his runs, he does so in a thoughtful fashion, as he times, angles and directs his run smartly to get the edge on his adversaries. So quick and aware when a teammate is in a position to pinpoint him, he gets on his bike swiftly to give himself every chance to latch onto through balls first.

In addition, when bursting into the box, the way he attacks the six-yard box, knows when to go to the near or far post and has the presence of mind to hold his runs as the defence collapses is a bonus.

Meanwhile, when it comes to his work with the ball at his feet, Onyekuru poses a very unpredictable and elusive proposition. On top of his aforementioned athleticism, his mazy dribbling ensures he can breeze by his man with his sheer pace, cut infield in an instant or beat his man with feints, shoulder drops, stepovers or searing changes of pace and direction. Moreover, the fact he’s so dangerous on the ball often attracts multiple markers, which has the key byproduct of freeing up space for teammates and destabilising his foes’ shape.

His close control when dribbling at speed notably places doubt in defenders minds, for if they step in he can quickly shift the ball to outfox them or draw a foul, thus making him an even more challenging adversary.

It must be said, however, that he can overdo it sometimes on the dribble, which means he gets cornered or fails to see a teammate in a better position. But all in all, any negatives are outweighed by the big positives attached to his confident and eye-catching work here.

While it’s not really his game to create chances or orchestrate passing moves, there’s been some signs of his aptitude here, as he can combine nicely in around the box, calmly recycle possession and play the odd splitting through ball if the option is there. Probably the most effective tool in this regard is how he plays some slick one-twos which helps unlock deep sitting defences while allowing him to receive the return pass in a goal facing posture so he can continue his momentum.

Onyekuru’s finishing complements his intriguing game nicely, for this ever improving area of his armoury allows him to reward all his good work. Instinctive and with a keen eye for goal, the man who finished sixth in the Turkish Super League scoring charts despite playing predominantly as a winger, can crucially score in a variety of ways.

Capable of opening his body to hit placed, side footed finishes, driven efforts, cheeky lobs, neat first-time efforts and very good when 1v1 with the keeper, Onyekuru’s a clinical operator. So quick to react to rebounds and good at recalibrating his runs, he’s great inside the box too, where he’s scored some nifty headers and tap ins.

Onyekuru has four years to run on his contract with Monaco, whom he joined from Everton last summer.

The 22 year-old has capped 11 times for Nigeria and was part of the Super Eagles team that clinched bronze at the last Africa Cup of Nations in Egypt.

Onyekuru began his football career with the Aspire Academy in 2010, and graduated in 2015 joining their partner club, KAS Eupen and helped the team get promotion to the Belgium First Division A in his debut season.

HE MADE HIS SENIOR DEBUT FOR NIGERIA IN A 3-0 FRIENDLY WIN OVER TOGO LAST YEAR’S JULY.