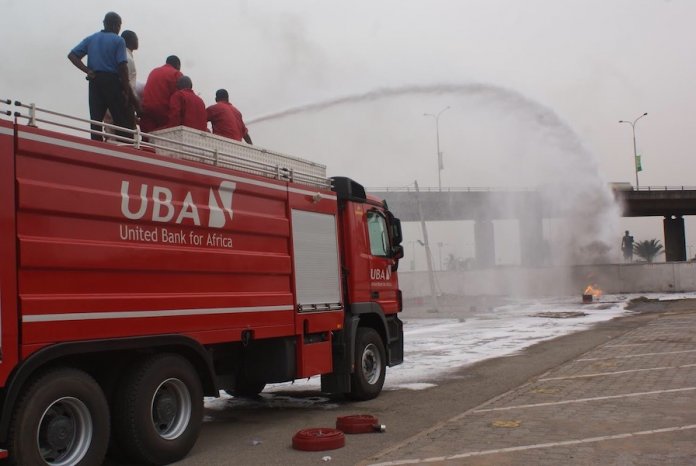 Banks are not known for their expertise in putting out fires but after a fire broke out at Obalende area of Lagos, a UBA fire truck was instrumental in preventing further spread and destruction. Charles Ajunwa writes that the feat was recorded because of the bank’s investment in safety

On May 1, as Lagosians observed Workers Day amid the COVID-19 lockdown, a driver lost control of his tanker while navigating a bend in the Obalende area of the state, leading it to crash into an Oando Filling Station, empty its content on the streets and resulting into a massive fire outbreak.

But, as quickly as it happened, fire service personnel from the Lagos State Fire Service and the Federal Fire Service, arrived at the scene. There was, however, a third arm of the emergency response team – the United Bank for Africa’s fire service – which, in no small way, helped in preventing the fire from engulfing more properties and lives.

“The pressure of the water (from government fire trucks) was not strong despite it being so close to the fire,” one Twitter user who identified as Josh said. ”It was shocking that the fire truck of UBA that was far away put out the fire in no time. If not for the bank’s truck several buildings would have been gutted by the fire.

“The feat carried out by the bank in putting out the fire is indeed a grand one and must be commended.”

But banks are not known for their expertise in putting out fires. So how did UBA come about what seemed a world-class fire-truck?

In line with global safety standards, UBA, which is one of the most ubiquitous banks in Africa, acquired a state-of-the-art fire fighting truck, capable of fighting fire incidents in all conditions in 2010.

The vehicle, acquired by the bank, among other advanced fire fighting machines, was another demonstration of its commitment to ensuring a safe and conducive working environment at all times, a press release said at the time.

The then Group Director of Resources, Mr. Kennedy Uzoka, who is now the bank’s CEO, said during the testing of the equipment in Lagos in 2010 that the NAFFCO Fire truck machine, a 6 x 4 wheel drive Mercedes Benz Actross 3332, is equipped with auxiliary shift for easy manoeuvring in all conditions.

“Although we will deploy the truck for our internal use, it will, however, be available to complement the services of public fire fighting agencies in Lagos and its environs,” he said.

“As often demonstrated in our various safety in our workplace initiatives, including our regular fire drill services, this new acquisition will strengthen our capacity to respond to emergencies,” Uzoka explained.

UBA’s Chief Fire Officer, Mr. Anthony Ezeani, listed features of the truck to include; delivery outlets and an output of 8000 litres per minute, equipped with RME 200 Hale, an American centrifugal type with normal pressure. The vehicle, according to Ezeani, has the capability to use water and foam to fight a fire. Foam is the only fire extinguisher that can fight combustible liquid like diesel, kerosene and various industrial oil with little or no health hazard.

Other features designed to guarantee the safety of the firemen and people trapped during a fire outbreak, according to him, include a monitor with which the driver can engage high rise fire, even without the assistance of firemen since it can cover 270 degrees; a searchlight that can illuminate any dark vicinity caused by smoke, thus making fire fighting very easy, even in obscured scenes; several life-support firefighting equipments like breathing apparatus, fire suit, headgear, eye protection goggles and leather safety boots.

True to form, the UBA fire service has been instrumental, not just to the bank, but its community. According to a UBA spokesman, Nasir Ramond, since the purchase of the Fire Truck on March 13,2010, it has fought more than 200 fire outbreaks. “The Fire Service has in recent past intervened with its world-class equipment to put off fires in Balogun Market, Transcorp Office and many others.”

The UBA fire truck’s socially responsible activities are only another example of UBA’s decades-long commitment to improving the lives of, not just its customers, but in societies in which it operates.

Under the leadership of Tony Elumelu, the bank has participated in the empowerment of thousands of African entrepreneurs, through the Tony Elumelu Foundation. UBA Foundation, the bank’s nonprofit arm, invests heavily in literacy schemes and regularly distributes palliatives to thousands across West Africa through its food bank programme.

UBA performs all these social functions while maintaining a sound pedigree as an institution that helps millions across the continent meet their financial goals. Many have noticed the bank’s dedication to excellent service.

“UBA group will continue to innovate and lead in all our business segments, whilst delivering top-notch operational efficiencies and best-in-class customer service. We are beginning to realise early gains from our ongoing transformation programme and I am excited about the days ahead,” Mr. Osadolor said.

UBA’s CEO, Uzoka, also expressed delight over the recognition from The Banker. “The recognitions come as a reassurance that we are on track in consolidating our leadership position in Africa, as we continue to create superior value for all our stakeholders,” he said.

So it was no surprise that UBA was at Obalende. The bank has consistently shown that its heart lies with the customer, who is inevitably part of society. Although one life was lost and several persons came out injured in the Obalende fire, the damage could have been worse if the UBA fire truck had not complemented the government response. Perhaps there is no greater corporate leadership than this – being prepared to avert danger for others.