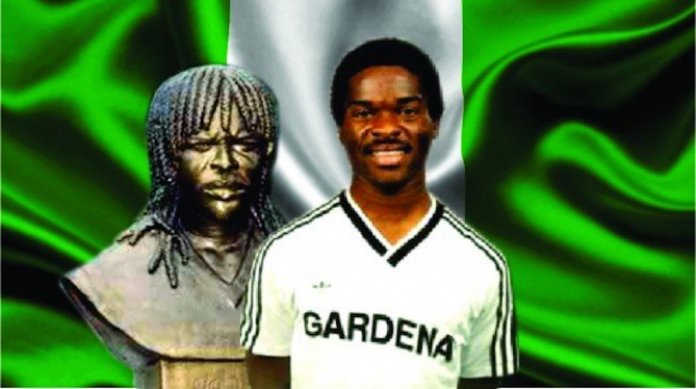 The mothers of two of Nigeria’s late sports icons, Samuel Okwaraji and Sunday Bada, have been touched by the magnanimity of the Minister of Youth and Sports Development, Sunday Dare.

Both mothers were at the weekend presented with cash and food items by representatives of the sports minister as a show of gratitude for the services rendered to the country by the two late sportsmen.

First to receive the minister’s largesse was Mrs Janet Okwaraji, the mother of the late Super Eagles player, Samuel Okwaraji, who got a surprise cash and foodstuff donation from Dare.

Samuel, then 25 years old, slumped and died on the turf of the National Stadium, Surulere, Lagos on August 12, 1989 during a World Cup qualification match against Angola.

The minister, who was represented by one of his aides, Mr. Bamidele Ajayi, at the home of the late Eagles’ star in Abakpa-Nike in Enugu State, donated various food stuffs and provisions as well as cash gift of N50,000 to the aging lady. The food items donated included rice, semovita and beverages.

Ajayi explained that the gesture from the minister was to assist Okwaraji’s aged mother as a mark of honour for the contribution of the former Dinamo Zagreb forward to Nigerian football which remains indelible years after his death.

“I have always been drawn to greatness and I admire people who live their lives to elevate the status of their community and nation. Okwaraji was not just a footballer, he was an icon and great patriot.

“Samuel Okwaraji was a great professional who redefined football in Nigeria with many young talents benefiting from his ingenuity and sacrifices by re-writing Nigeria’s name in gold in world football,” observed the minister in his special message to the family of the late icon.

Responding on behalf of the family, the eldest son of the Okwaraji family, Mr. Patrick Okwaraji, regretted that though their mother was slightly indisposed hence she could not receive the minister’s representative, he expressed the family’s appreciation for the kind gesture from the minister.

Patrick said he lacked the words to describe the gesture from a serving minister to lend support to the family after several past attempts had failed.

He said: “Sam died almost 30 years ago. Everybody would appreciate if they feel he is worthy to be remembered and appreciated for the little contributions he made even when he died in his prime.

“I thank the minister for deeming it worthy to do this. It is very encouraging that this is the first and only minister to support the family to date. We are indeed very grateful. I honestly don’t know what to say other than to say the family appreciates this show of commitment to us which is long overdue.”

Similarly, the ancestral home of the late Nigerian quarter miler Sunday Bada in Odomogun Quarters, Ilaere Ogidi in Ijumu Local Government Area of Kogi State also came alive yesterday as his mother, Mrs. Funmilayo Bada, got a soul lifting gift of N50,000 and food items such as rice, semovita and beverages from the sports minister.

Mrs. Bada expressed gratitude to the minister for lending support to her, especially on Mother’s Day.

She said that she was delighted that the minister deemed it fit to assist her years after the passage of her son. Bada died on December 12, 2011.

He was a member of Nigeria’s 4×400 relay team that won silver at the Sydney 2000 Olympic Games in Australia.

That silver was eventually lifted to gold following the disqualification of Team USA after one of her quarter-milers tested positive for dope.

Until Bada’s death, he was the Technical Director of the Athletics Federation of Nigeria as well as a serving police superintendent.