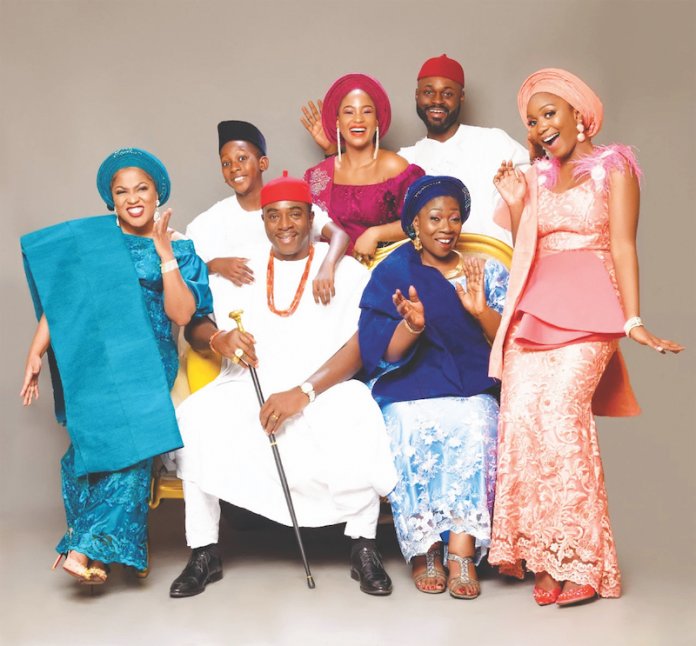 A new television series, ‘It’s a Crazy World’ by Nollywood actress/producer, Amanda Ebeye was inspired by how people like to make their life seem perfect and the raging competition that sets the social media on fire, writes Ferdinand Ekechukwu

From Clinic Matters, a popular television series, where she played a young nurse, Amanda Ebeye has upped her game. The actress turn producer premiered her first television series on April 30th, on Silverbird Network. Titled “It’s a Crazy World”, the sitcom, which features seasoned actors such as Bob Manuel Udokwu, Grace Amah, Frances Odega, Kunle Coker, and Amanda Ebeye herself, expounds the impact of social media on the society.

The script woven around women and social media was initially conceived as ‘The Wives’, but for lots of movies with similar names. According to Ebeye, whose favourite social media tool is Instagram, the new TV series was inspired by how people like to make their life seem perfect and the raging competition that sets the social media on fire, while everyone tries to outdo the other. To her, “There is also a lot to learn from it. It’s a family drama, comedy and very educative. We want to teach young girls and boys that there’s more than life on the gram, people posting perfect lives does not make their lives perfect, actually most of the time, their lives are far from perfect.”

The modern-day 30-minute sitcom, majorly directed by KC Muel and Amanda Ebeye, tells the story of a very wealthy man with three women and three children. It’s a hilarious sitcom that addresses the competition women go through in general trying to outdo one another and constantly vying for the man’s attention. In this case, these women would use any means available to them, with social media being their number one go-to tool.

The other two women are constantly trying to win the favorite spot which the first wife already occupies as the man of the house constantly reminds them that besides pregnancy and the children from the other women; he’s a man with a one-man-one-woman personality.

On the choice of cast, Ebeye said, “Delivery and carriage were the main things and we also wanted a perfect fit for the roles. All the actors are amazing actors that we have seen pull off equally challenging roles in other films/series.”

Here are some of the cast and their roles:

As husband to Adaeze Okpalla, Udokwu plays Don Chukwunma Okpalla, a smooth talker that knows how to get his way with women. He presently has two other women living with him because once a woman gets pregnant for him, he brings her in as he wants all his children under one roof but he never marries them eventually.

As Adaeze Okpalla, Don’s only legitimate wife, she’s what you would typically call “the good wife”. She believes that someday, what was used on her husband would expire and she would once again have him all to herself.

As Chief Balogun, a Yoruba businessman, and Don’s friend and confidant, the wives don’t like him because they feel he’s a bad influence on Don, after all, rumor has it he has a wife in all 36 states in Nigeria.

As Kemi, who’s one of Don’s mistresses, she is a teacher who hails from the Yoruba speaking part of Nigeria. She has an eleven-year-old son for Don who has refused to match her intelligence.

As Meks, she is the slay queen, always-on social media searching for clout through her celebrity friends. Meks happens to be one of Don Chukwuma Okpalla’s lovers. She has her nose in every body’s business and hardly has time for her own business.

As Anita, she is the second child of Don and Adaeze and the only daughter in the family. She’s 19 years old, and a fresh school leaver waiting for entry into University. She’s young, beautiful, and loves taking and posting photos, videos on social media platforms for herself and her mom.

As the security man “China”, he nicknamed himself “China” and lies to people that he used to be in China but chose to come back home to Nigeria because of how loyal he is to his country. He refuses to be called a gateman but “Chief Security Officer”.

Kunle is one of the scriptwriters and also stars as Bassey, the chef. His character is hilarious; he speaks with a Calabar accent and feels his food is the best in Africa. He is torn most of the time between the wives and doesn’t know who to please.

Bassey and China are either gossiping about the household or bickering at each other.