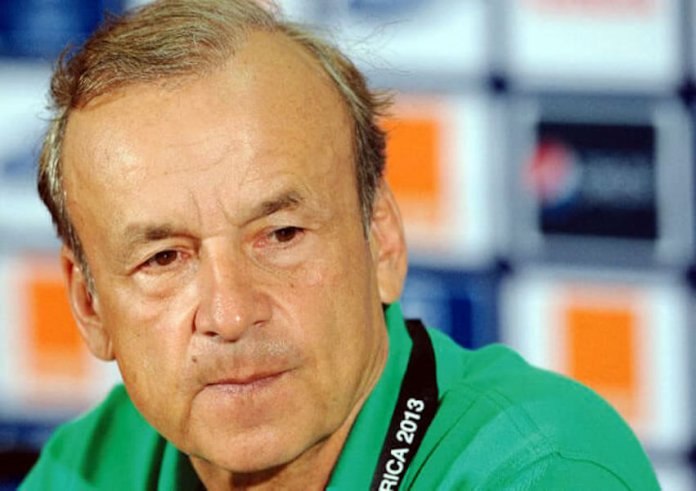 Gernot Rohr’s willingness to extend his contract, as well as taking a wage cut to continue as the coach of Super Eagles, has not only dominated the airwaves in the last few days, it has also provided an opportunity to examine other key issues in Nigerian football culture.

Super Eagles Coach Gernot Rohr earlier in the year spoke of his desire of convincing more players with dual nationality to represent the Super Eagles ahead of the 2022 World Cup in Qatar. Taking a look at the youth teams of major clubs in England, one will be amazed by the number of players eligible to play for the Super Eagles.

The recent invite of Belgian-born Heracles Striker Cyriel Dessers for the Afcon qualifiers before the global pandemic is a testament to Rohr’s desire of bring in more players. In time past, players like Alex Iwobi, William Ekong, Leon Balogun, Joel Aribo, Ola Aina, Semi Ajayi, Tyrone Ebuehi and Maduka Okoye had all pledged their international future to Nigeria

Above all we need to critically examine this development looking at the pros and cons.

In the early 1990s, which was a period of rebuilding for the Super Eagles following past failures, the team had a mix of home based players and few players who just moved to Europe. Coach Clement Westerhof invited England-born defender Rueben Agboola for the Afcon Qualifers in 1991. He won a bronze medal at the 1992 Afcon, opening the gate for the invitation of more foreign born players to the Nigerian team. Efan Ekoku of Norwich City was next to be invited. He was a member of the Afcon winning team in 1994 and also played at the World Cup in 1994 but the romance did not last long. One thing Agboola and Ekoku had in common was that they did not play for long with the Super Eagles. Agboola felt cheated for a long period as he was owed countless numbers of unrefunded traveling ticket fees. The memory of the Super Eagles having to cut their tracksuits into soccer jerseys in an Afcon Qualifier match against Burkina Faso following late arrival of their jerseys was unforgivable. Ekoku, on is part, was seen as not good enough by many (his super eagles team mates inclusive) in spite of his goal scoring exploits with Norwich City.

Many football fans in the past had said if a player with dual nationality was good enough he would never play for Nigeria.Tammy Abraham and Fikayo Tomori comes to our mind in this regard. But for every Abraham and Tomori there was a Carlton Cole and a Gabriel Agbolahar who turned down the opportunity to play for the Super Eagles only to make less than five appearances for the English national team.

Victor Moses represented England at the youth level, he played at the Under-17 world in 2007, a competition the Golden Eaglets of Nigeria won. The competition produced stars such as David De Gea, Toni Kros, Eden Hazard, Borjan, Christian Benteke, and James Rodrigues.

Moses struggled to progress into the England National Team despite his wonderful performances with Crystal Palace which led to his big money move to Wigan. The opportunity to play for the Super Eagles came calling and Moses grabbed it with his two hands. He won the 2013 Afcon, played at 2014 and 2018 World Cups in Brazil and Russia respectively, and was nominated for the BBC African Footballer of the Year in 2017.

Willian Troost Ekong made his debut for Nigeria 2015, he was a free agent at that point after he was released by Dutch team Groningen. Ekong’s performance at 2016 Olympics with the Nigerian team earned him a transfer move to Bursaspor in Turkey. Nigeria gave him the platform to fly.

Fear of the Unknown

The early retirement of Victor Moses after the 2018 World Cup in Russia raised questions of loyalty and sincere love for the nation. Will these players be loyal to Nigeria for life or they will use the Super Eagles to achieve their various levels of career breakthrough then turn their back against the nation? Will they see playing for Nigeria as an opportunity to represent their fatherland indeed? Or they feel they are doing us a favor by playing for the national team? And will our administrative incompetence such as owing match bonus deter them from giving their all?

Impact on the Homegrown Talent

Influx of foreign-born players into the Super Eagles represents an easy way out for sports administrator in Nigeria and serves as an opportunity of not taking responsibility of developing grassroots football knowing full well that somewhere in Europe there are players who have the right training already and will walk straight into the national team and the sports administrators only need to sharpen their persuasive skills to convince this players to play for Nigeria.

Controversially, one of the latest Super Eagles’ invitee goalkeeper Maduake Okoye plays in the 4th division of German football. Did we just conclude there are no good keepers in the Nigerian Professional League that’s why we have to go to the 4th division in Germany to look for one?

‘Balance’ is the answer; the growth process must be balanced. Let’s develop the local leagues, give every player a fair treatment and never beg a player to play for the national team because if you beg them to play once you will have to keep on begging them to come back.

And finally, what if there is a change in FIFA’s rule? That presents an urgent need for us to rethink and strategize on how to develop a working football culture.