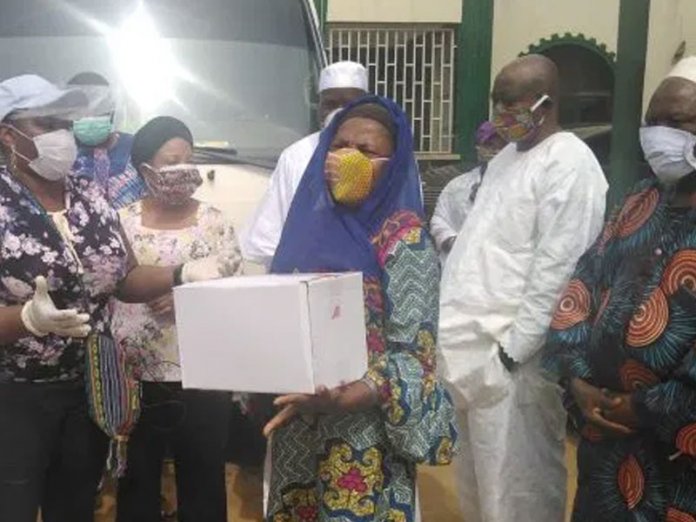 When the news broke on Monday, April 13, 2020, during the nationwide broadcast of President Muhammadu Buhari that the initial 14-day lockdown had been extended by another 14-days, the atmosphere was filled with gloom and despair.

Despair, not from the reason for the lockdown, i.e coronavirus, but misery from how to survive, especially for a nation filled with daily income earners, whose source of survival has been put on hold in a bid to curtail the spread of the COVID-19 pandemic.

Fourteen days after, the promise of governments’ palliative packages remains what it is for some – a promise. Something that is heard but never seen. Then the proverbial eagle arose. A group of people under the aegis of Eko Club International, a community-based organization of Lagosians in the Diaspora, formed to contribute positively to the advancement and prosperity of Lagos State, with its five loaves of bread and two fishes, decided to feed the multitude. From Lagos Island LCDA, Isolo LCDA, Ikosi-Ejirin LCDA in Epe, Igbogbo LCDA in Ikorodu and Alapa community in Badagry and orphanage home in Badagry, Eko International Club left smiles on the faces of the multitude.

For some, COVID-19 is a first-time opportunity to reach the vulnerable members of society with different relief packages. To Eko Club International, it is a culture – an ideology birthed in the vision of three people; Sam Dipeolu, T.J Abass and Mr. Yesir Ganiyu from Eko Club Houston at a meeting held on February 15, 2000, with members of Eko Club Canada. The three-day activity of feeding lagosians from different walks of life is a further testament to how far the club has come. Representative of Eko Club International in Nigeria, Mrs. Shola Hasstrup, said that the gesture was to give back to the community and to provide assistance for the vulnerable and the downtrodden during this hard time with bumper food Items.

“This is part of the club’s corporate social responsibilities which we have been doing since time immemorial. We will endeavour to sustain this gesture,” she said.

Her words re-echoed the vision of the founding fathers. It is a reaffirmation of the selfless sacrifices the group has made over the years. When the train stopped at Igbogbo community, the Adeboruwa of Igbogbo Kingdom, Oba Semiudeen Orimadegun Kasali appreciated the club’s kind gestures of giving back to the community.

He said, “I am happy that the noble club remembers us here in Igbogbo and the people of Igbogbo Kingdom appreciate your coming. We are looking forward to receiving your club members here in Igbogbo soonest, after the COVID-19 pandemic.”

In the same vein, the Chairman of Igbogbo LCDA, Mr. Sesan Daini, commended the gesture which he said was timely. He also pledged to collaborate with the club anytime it calls.

The Osolo of Isolo, Oba Kabiru Kolawole Alani, lauded the feeding programme. According to him, Isolo would always be home to Eko Club International.

“I really appreciate the efforts of Eko Club International, I am particularly not surprised because they have always been at our aid. For instance, they have built a standard hospital that presently serve the health needs of our people in Isolo. We pray that God will continue to bless and enrich their pocket”

In his appreciation speech, Balogun, Elejirin of Ejirin,Oba Babatunde said, “no amount of words would suffice but prayers.We pray that the President of the club, its excos and other people associated with the club will continue to prosper.

Also, Oba Oyekan Adekanmi Ilufemiloye Ajose Possi III, the Alapa of Egun-Awori, Apa kingdom in Badagry showered praises and prayer on the club and thanked the members for their intervention in this trying period.

For these communities, that might have been the first of its kind. But for others, Eko Club International is the oasis in the desert, with over 20 active chapters across the globe, taking care of people.