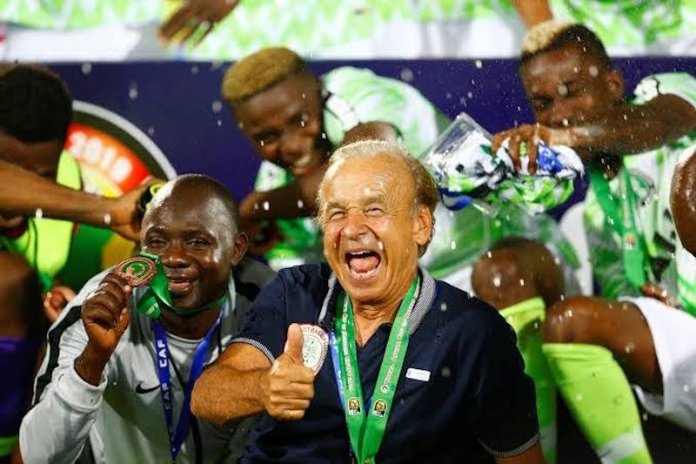 With barely two months to the end of the two-year contract terminating on June 30, Super Eagles Technical Adviser, Gernot Rohr, has been offered another fresh two-year deal.

“I just received a proposal for an extension. I will also have to look at it,” Rohr said without elaborating.

The former Girondis Bordeaux coach in the French League was first appointed Nigeria Manager in August 2016.

He won his first gamein charge of the three-time African champions against Tanzania in Uyo.

Rohr successfully led Nigeria as the first African side to qualify for the 2018 FIFA World Cup in Russia even with a game to spare. He similarly qualified Nigeria for AFCON 2019 in Egypt after Eagles had missed the previous two editions.

Super Eagles finished the tournament in Egypt with the bronze.

Although several Nigerians had called for the sacking of the German following the inability of the Super Eagles to qualify for the knockout round from the group stage of Russia 2018, the NFF insisted that the coach was on track and satisfied with the reforms he has brought to the team.

Others sources had told THISDAY that NFF could not afford to sack Rohr as a result of the $1million (about N382million) release clause in his contract.

However, it is not yet certain if the federation has again encumbered itself with such a clause in the new deal offered the German.

President of the NFF, Amaju Pinnick had said on Arise TV Morning Show programme recently that Rohr now will need to stay longer in the country and also be paid his wages in Nigeria’s currency, the Naira.

He also listed other conditions to include monitoring the domestic league for fresh talents for the senior national team.

It is these new conditions that have created speculations of a frosty relationship between both parties and that, NFF perhaps, was looking for a way to ease the former Burkina Faso coach out of the job.