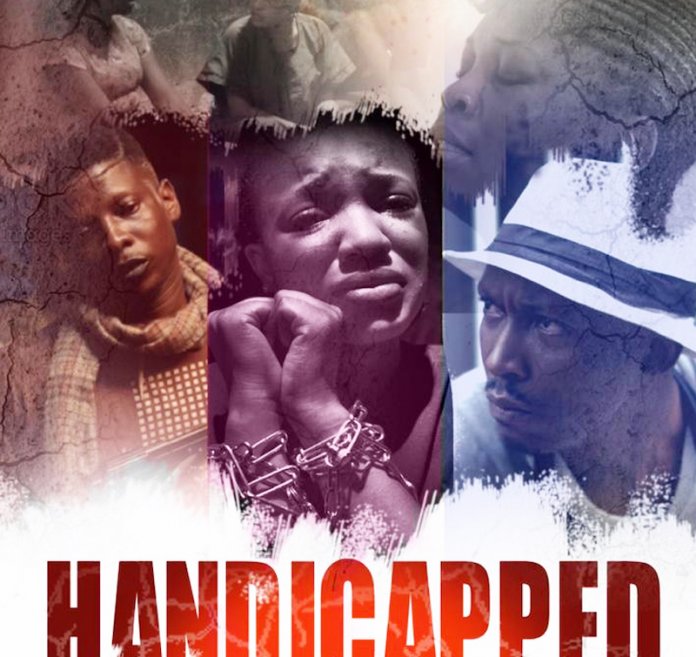 Agony. This is the overarching feeling that engulfs one after watching this 93-minute debut movie from Alvary Studios titled “Handicapped.§” Shot in various locations along the paths regularly used by irregular migrants, the story told by Roy Osuji, is far from strange. His central character, Ese, is a young girl from an economically-disadvantaged home, raised by a single mother. Her desire to be educated and secure a better quality of life led her to trust Uncle Maxwell. Unknown to her, Maxwell is entangled in the business of hum§qan trafficking and irregular migration.

Opening with a flash forward, Handicapped arouses the viewer’s interest with the multiple scenes of the present day Ese, a survivor of human trafficking, who is educating young girls on the dangers of irregular migration. Ese’s economic need is repeatedly exploited by Maxwell, first as a house-girl. Embittered by the rape attempt by her employer’s husband, Ese calls it quits with her boss and by extension, her education. Upon Maxwell’s discovery that Ese is a virgin, he convinces her about irregular migration and makes her take an oath to remit some of her earnings when she arrives at her country of interest. Ese is deceived into accepting this deal on the premise that she’d study medicine abroad just as she has desired. The intrigues that played out form a visual documentation of the several real-life ordeals of many young girls and men that the producer, Osuji has retold in this emotional flick.

A visual juxtapose of the past and present makes the narrative particularly engaging. Starring Kunle Idowu, a comedian popularly known as Frank Donga, Handicapped is directed by Seun Arowojolu who co-wrote the screenplay with Denise Chikaodi. Weaving tragedy and romance, the gripping movie spills all the dirt on the plight of the girl-child whose legitimate ambition to become successful is overturned by the greed of human traffickers. Amaka, a supporting character in the plot becomes the heroine of the story for the ultimate price she paid to procure freedom for the other girls who were trapped in the neo-Atlantic slave trade.

Osuji’s side view on irregular migration hinges on the perspective of the prey, not the predator. To be sure, the actual receivers of these “human goods” are not revealed in the story but the snares of luring young girls are articulated in the plot that raises questions about border management, sexuality and the lingering humanitarian crises that many developed countries currently find very worrisome. More often than not, young girls are lured into prostitution as soon as they depart from Nigerian shores. As seen in Handicapped, these greedy merchants cash in on the weak border security as well as the naivety of the girls and their parents to establish international deals which may be forced labour or forced prostitution. Since 2017, the U.S. State Department’s Office to Monitor and Combat Trafficking in Persons placed Nigeria in “Tier 2 Watchlist” which implies that the number of victims of trafficking is perhaps significantly increasing and there is lack of evidence to prove that conscious effort to combat the scourge is in full swing.

In terms of special effects, this movie chimes on a high note with Abdul’s cringe-worthy torture in the hands of the brutal gang-leader, Felix. Handicapped is a non-commercial movie that will likely tour schools and institutions that are actively concerned with migration. With Osuji’s Handicapped, it is effortlessly excruciating to contemplate the grim picture of young girls arm-twisted into living undesired lives.