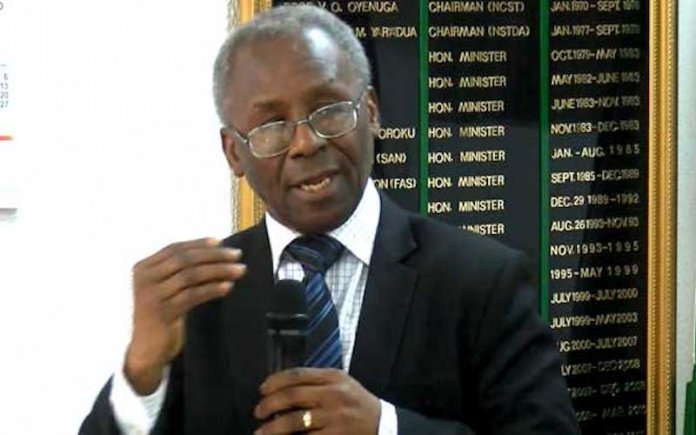 With the number of COVID-19 cases rising by 30 in a single day yesterday, bringing the tally to 373, panelists on an Arise TV programme, including Professor of Virology and former Vice Chancellor, Redeemer’s University, Prof. Tomori Oyewole, have warned that the nation may be in for a prolonged shutdown.

The panelists, who spoke during the Arise News Channel Global Briefing on COVID-19, a programme on Arise Television, the broadcast arm of THISDAY Newspapers, described Nigeria’s testing rate for the pandemic as poor, warning that with the slow pace, the country’s lockdown might last for several months.

President Muhammadu Buhari had on Monday signed the COVID-19 Regulations No 2, extending the lockdown in the Federal Capital Territory (FCT), Lagos and Ogun states which started on March 30, 2020, by another 14 days.

But the World Health Organisation (WHO) has said countries should consider protecting human health first while making decisions on whether to lift restrictions or impose them.
Lagos State Government has also discharged eight more COVID-19 patients from its Infectious Disease Hospital in Yaba, and listed one more patient as dead.

The state government has also identified 119 people with COVID-19 symptoms during its house-to-house search that has so far covered a total of 118,000 households in communities.

The pandemic has also claimed the life of the Chairman of the defunct Sosoliso Airline, Mr. Victor Ikwuemesi, who died yesterday in London.
The Arise TV News panelists urged the Nigeria Centre for Disease Control (NCDC) to reduce its criteria for testing if it does not want the country’s COVID-19 infection rate to snowball in the coming weeks.

Sharing his thoughts, Oyewole said the case definition protocol of the federal government made it difficult for NCDC to test a high number of Nigerians who have been clamouring to have their samples tested for the disease.

He said: “NCDC said you must have come down with one or more symptoms of the disease before you can be tested. The problem with this case definition is that there are a lot of persons who will not come down with the symptoms even though they are infected.
“These categories of persons have the capacity to infect people around them. So, if the government ignores such persons, be rest assured that our infection rate will increase and the lockdown will continue for several months.

“The incubation period for the disease is one to 14 days. It can fully incubate in any of those days. So, there is no point waiting for the 14th day or when symptoms are obvious before testing can be done. This has limited a lot of Nigerians from being tested, and this is dangerous for our fight against the disease.”

He advised the federal government to review the criteria for testing so that anyone who has had contact with a positive person or who came into the country from a high-risk nation should be tested.

A security analyst, Mr. Seyi Adetayo, said one of the challenges federal and state governments must be ready to tackle during the lockdown was insecurity, adding that most of the criminals are people who depend on the daily income to feed.

On why Nigerians are not totally observing the sit-at-home order by the federal government, he said the mistake was made from the onset, noting that religious leaders would have been carried along from the first day.

Another security analyst, Mr. Kabiru Adamu, said the Inspector General of Police should identify the hotspots and beef up security around such areas, adding that in the coming days there would be more cases of insecurity unless the security agencies step up their game.

He said: “I am not in support of bringing the military to the streets to tackle the rising insecurity, except the police, say they do not have the capacity to tackle the challenges.
“If government must bring in the military, there must be templates and standard operating procedure so they do not infringe on the rights of the people.”

Nigeria yesterday recorded 30 new cases of COVID-19, bringing to 373 the total number of confirmed cases in the country.
Giving a breakdown yesterday, NCDC said 25 of the new cases were recorded in Lagos, two in FCT, and one each in Kano, Akwa Ibom and Edo states.

According to NCDC, 99 patients have been discharged while 11 have died.
A breakdown of the total figures showed that Lagos has 214 cases; FCT 58; Osun 20; Edo 15; Oyo 11; Ogun nine; Bauchi and Kaduna six each; Akwa Ibom six; Katsina five; Kwara four; Kano, four; Ondo, and Delta three each; Enugu, Ekiti and Rivers two each while Benue, Niger, and Anambra have one each.

However, NCDC has projected that the testing capacity would soon ramp up to 4,000 per day with over 9,000 contacts traced.

WHO Warns against Slowing Down Measures

WHO yesterday warned countries to ponder over whether or not to relax restrictions before they take a decision either way.
It said priority should be given to protecting human health first while making decisions on whether to lift restrictions or impose them.

The Director-General, Dr. Tedros Ghebreyesus, made the recommendations during the virtual briefing in Geneva while updating journalists on the status of COVID-19 across the world.

Ghebreyesus said: “Some countries are considering when they can lift these restrictions; others are considering whether and when to introduce them.
“In both cases, these decisions must be based first and foremost on protecting human health and guided by what we know about the virus and how it behaves.”

According to him, some countries and communities have now endured several weeks of social and economic restrictions.
He said countries with large poor populations were likely to practise the stay-at-home orders and other restrictions used in some high-income countries.

Lagos State Government has discharged eight more COVID-19 patients from its Infectious Disease Hospital in Yaba, bringing to 69 the total number of persons successfully treated from the disease in the state.

However, a 56-year-old Nigerian has died as a result of COVID-19 complications in Lagos.
Lagos State Governor, Mr. Babajide Sanwo-Olu, said six of those discharged were males and two females.
He said: “This brings the number of patients successfully managed and discharged from our facilities to 69.

“Please, let us continue to adhere to all the safety advice from our health institutions.”
Lagos State Commissioner for Health, Prof. Akin Abayomi, also announced the death of a 56-year-old Nigerian.
He said yesterday that the male patient, who died on Monday, returned from the United States recently.
This brings the number of COVID-19-related deaths in Lagos to six.
The state has recorded 192 COVID-19 cases with 120 still active.

Abayomi also said a total of 118,000 households had been reached in the house-to-house active case search for possible cases in communities.

“We have embarked on an active case search in communities. The idea is to go to hot spots and go from door to door with our health personnel. So far, in the last two days, we’ve visited 118,000 households and we’re looking for the typical symptoms of COVID-19. We’ve identified about 119 people who have the symptoms that are suggestive of COVID-19.

“But let me remind you that COVID-19 is one of the viruses that can cause respiratory symptoms. There are many viruses. So, the idea is to take samples from these 119 and analyse them and that would give us an idea of how much COVID-19 activity is happening in the communities,” he stated.

The Chairman of the defunct Sosoliso Airline, Mr. Victor Ikwuemesi, died yesterday in London, a few days after he was diagnosed with COVID-19.
A source close to the family said Ikwuemesi was admitted to an unnamed London hospital following a brief illness.

He later tested positive for COVID-19 in the result that was released yesterday.
The source said he was in Intensive Care Unit (ICU) on oxygen since he arrived the London hospital.
“But when the oxygen was removed for him to eat he couldn’t breathe on his own. So, they put him on a ventilator and he died shortly after,” the source said.

The federal government yesterday took delivery of medical equipment donated by the United Nations to aid its efforts at combating the virus.
The Minister of Aviation, Senator Hadi Sirika, who took the delivery on behalf of the Presidential Task Force (PTF) on COVID-19 at the Nnamdi Azikiwe International Airport in Abuja, thanked the United Nations and Allied Air Cargo for transporting the equipment free of charge to Abuja.

According to him, the equipment, which included, among other things, 50 ventilators, would help in boosting the nation’s capacity to contain the spread of the pandemic.
Earlier, the United Nations Resident Coordinator for Nigeria, Mr. Edward Kallon, had noted that the consignment, which is likely to be the first of several to come, included 50 A30 ventilators and personal protective supplies and was procured with funds from the recently launched COVID-19 Basket Fund, including $2 million mobilised within the UN system in Nigeria and $200,000 contribution from APM Terminals.

The Inspector General of Police, Mr. Mohammed Adamu, has asked all Assistant Inspectors General of Police in charge of zonal command and Commissioners of Police to deploy all resources to fight hoodlums, who are taking advantage of the lockdown in FCT, Lagos and Ogun states to rob citizens.

Adamu gave the order yesterday at the Presidential Task Force on COVID-19 media briefing.
The order followed the reported spate of robbery attacks by criminals in Lagos and Ogun states.
He also warned the hoodlums terrorising Lagos mainland and other parts of the country to desist from the criminal acts.

Minister of Humanitarian Affairs and Social Development and Disaster Management, Ms. Sadiya Farouq, also explained the disparity in the distribution of rice palliative received by the Nigeria Customs Service and sent to some of the states.
Farouq said although NCS pledged to release 150 trucks, what was actually available was 40 trucks.

She said her ministry had only redeemed 20 trucks of rice from the allocation.
The Chairman of the PTF, Mr. Boss Mustapha, in his address at the press conference, said he planned to hold a video conference today with Northern states’ governors on the need to continue to support the lockdown measures put in place by the federal government to curb the spread of COVID-19.

Meanwhile, NCDC has recommended face masks for Nigerians as part of its new guidelines for halting the community spread of COVID-19.
In its latest advisory released yesterday, it said this should serve as an added layer of physical distancing, and that they should be disposed of properly after use.

The advisory reads in part: “Masks should be used while in crowded settings, like markets. They should be used in combination with social distancing, handwashing, respiratory hygiene and disinfection of surfaces.

“It is critical to ensure proper handling of masks. Improper disposal and frequent touching can increase risk of infection with the COVID-19 virus.”
It, however, said due to a global shortage of face masks, medical masks were best preserved for patients and healthcare workers who need them most.