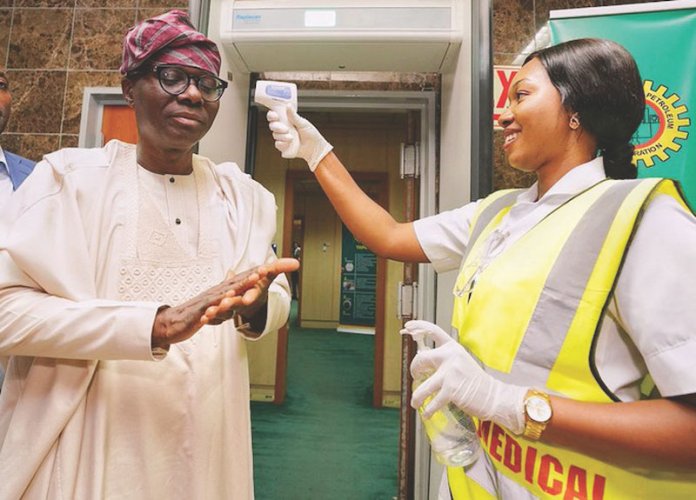 As the nation races against time to stem the spread of the Coronavirus disease, Samuel Ajayi writes that there is a need to disabuse the minds of the ordinary Nigerians, who erroneously think the virus is for the rich, thereby refusing to adhere to the rules to mitigate its spread

As the Coronovirus pandemic ravages the world, the import of its severity in Nigeria was brought home when former Vice President, Atiku Abubakar, announced that his son, Mohammed, had tested positive for the dreaded virus.
Luckily, Mohammed’s wife and kids tested negative. After this, the Banchi State governor, Bala Mohammed, announced that he had tested positive for the virus and as a result, he would be going into self-isolation.

Just when that was yet to sink in, the Ekiti State governor and Chairman of the Nigeria Governors’ Forum, Dr. Kayode Fayemi, announced that he had come into contact with two people, who had tested positive for Covid-19 and as a result, he would be going into self-isolation before his test result would come out. Luckily for him, he tested negative for the virus.

As this was going on, the Kaduna State Governor and former minister of the Federal Capital Territory, Mallam Nasir El-Rufai, announced in his personal twitter handle that he had tested positive for the virus.

Following that, the Oyo State governor, Seyi Makinde, also announced that he had tested positive for the virus. The biggest ‘fish’ so far was the Chief of Staff to the President, Mallam Abba Kyari, who also tested positive for the virus and was believed to have contracted the disease after a trip to Germany, where he had gone to hold meetings with officials of Siemens over the power situation in the country.

In all this, the trend seemed to suggest that the virus was ‘targeting’ the high and mighty. But that is an assumption that might end up putting the larger populace at risk. There are fears during the week that this assumption was gaining currency among the common people in the country, who feel that the COVID-19 virus might be reserved for the high and mighty alone.
Perhaps, the assumption was not without basis. Reason being that most of those who tested positive were those who came into the country after trips to the United States and the United Kingdom.

In fact, the biggest talk of the town as per the importation of Coronavirus into the country was the 80th birthday bash of the nation’s High Commissioner to the United Kingdom, Retired Justice George Oguntade.
Many crème de la crème of the Nigerian society attended, including former and serving governors, National Assembly members and so on. A top former lawmaker in Lagos State said caution was thrown into the winds, as Nigerians who attended the bash did not observe any social distancing as they hugged and mingled carelessly.

Perhaps, with this in mind, it might be ‘safe’ for an ordinary Nigerian to assume that Coronavirus was for the rich. But that would be a criminal assumption and disaster-in-waiting. The reason is that the disease, even in countries with functional and well-established health systems, has shown that it is no respecter of anyone and it does not discriminate.

Dr. Jay Osi Samuels, Harvard-trained health development expert, who is well versed in public health, told THISDAY recently that the nation must do everything possible to ensure that the general populace adhered strictly to the guidelines set by the World Health Organisation, WHO, to stem the spread of the virus.

According to him, the way the virus has ravaged countries with strong health systems has shown that the nation might have a massive problem on its hands should there be an explosion of the virus. “We have to get people to observe the guidelines and rules set out to curb the spread of the virus,” Samuels said, adding: “Should we have a major outbreak in the country, we might not be able to cope with it since our health system is not that strong to deal with such large scale health emergency.

“If you see what COVID-19 is doing in countries with strong and functional health systems, then, you will agree with me that we must ensure that there is no major outbreak of the virus among the general populace.”
Samuels might just have a point. For instance, if there was anything most Nigerians, especially those in Lagos, have not kept, it is social distancing. People still mingle and mix in open and public places despite the risks involved in such practice.

For instance, the Lagos State government had to seal up, a mosque in Agege, a suburb of Lagos after some of the adherents of the Islamic faith, who had gathered to pray at the mosque attacked security operatives, who had come to enforce the stay-at-home order.
In Katsina State, at least one person lost his life during a clash between security agents and some Muslim worshippers, who insisted on having their normal Jumat service, despite the legislation against gathering of people if they are more than 20 in number.

Churches are not left out. Some top Christian leaders and Pentecostal pastors were heavily criticised for going ahead to hold their normal Sunday services despite the advice against such so as to reduce the coming together of large number of people in a single place. In fact, one pastor was arrested in Abuja last Sunday for flouting this order.

While there is little or no vehicular movement in many parts of Lagos, the lockdown does not seem to affect human traffic. In most parts of the state, people were seen moving around and most road have been converted to soccer fields by young people, both male and female, who are apparently killing boredom.

Even shops that were not selling essential goods had started opening for business while commercial motorcycle operators have roundly flouted the stay-at-home order as they have been using the opportunity of the ban on vehicular movement to cut quick business by taking people to their destinations.

While security agents have been accused of high-handedness, the nonchalant attitude of the general populace towards the Covid-19 virus is a major threat to the containment of the spread. And the belief that it is a virus for the rich and the mighty does not help matters. This is why states are racing against time to prevent a local epidemic.