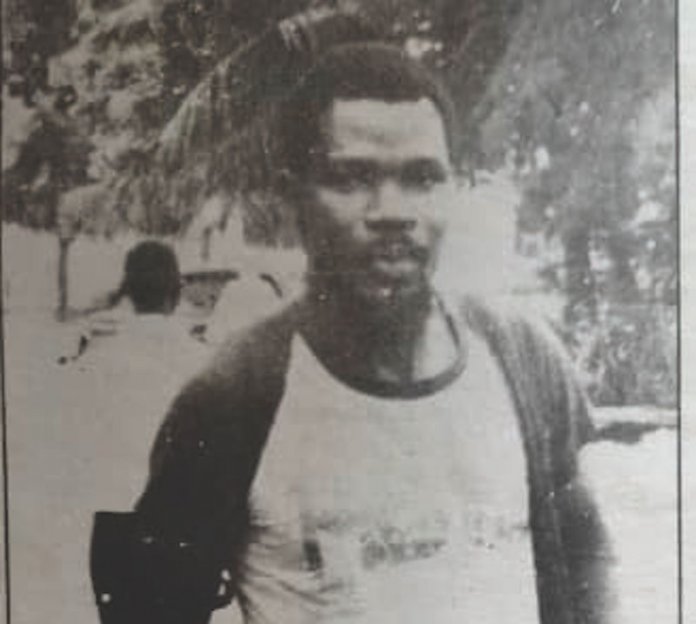 In these pestilential times, one must device some means of deflating anxieties, tension and doubts. In my house, we have motored on a tank full of improbables, allocating house chores to all members of the family tied down by the lockdown….but that is a story for another day.

The silent danger and quiet devastation of the Coronavirus pandemic has swelled in me a taste for the melancholic. We have begun a lockdown in our home, two weeks before the presidential fiat…so, the itch to scratch at boredom and negativity had been simmering…hourly refueled by sad, sagging news of widespread deaths and devastations, of even the best public health systems.

My thoughts continually drifted to men and women who fought death and diseases admirably, sprinkling some kind of succour and inspiration to others, in their valiant struggles to humble the notorious grim reaper.

Such a fighter was ace photographer, chronicler of happenstances and arts apparatchik whose slippers have hardly been filled since he departed these shores in 1997. In remembrance of Hakeem Shitta, and in grudging notice to the current pandemic, I recall my tribute to the fallen general of the Nigerian artsphere:

”It has happened,” announced my friend, Edmond Enaibe – the moving soul of the bustle of efforts to save the life of another friend. He made his announcement in chilling abrasiveness – sweeping into our makeshift office with an unusual dowdiness. My mind immediately zeroed in on Nigeria’s banking etiquette, bankers and bouncing cheques.

You see, we had issued a cheque in pursuit of better health for our common and uncommon friend. Mr. Enaibe, a usually vigorous man, looked deflated. I felt concerned.

The bank in question was on Victoria Island – and in these times of fuel scarcity, a fruitless visit in excess of 30 kilometres could bring out the melancholy in anyone.
But Enaibe slumped on the “camping bed” inside what could pass for a production room, mumbling: “It’s Hakeem Shitta. It has happened. He’s gone!” Goose pimples seared my body, provoking alarum bells in the depth of my soul.

It is not the manner of his death that ravages the soul. It is not even the painful loss of another artiste. No, not the ordinary agony of bereavement; or the lingering quiet rage of hopelessness.

To some of us who had engaged ourselves in propelling financial and psychological gestures while seeking Hakeem Shitta’s recovery, the insistent agony among us is that Hakeem Shitta could still have lived. He had the courage, unusual in these parts. He had the spirit of urgency to get out of the debilitating and strange illness. He lacked any sense of doom, foreclosing any thoughts of not surviving his predicament.

All he needed – the only need he refused to demand of us – is a little love, attention and care. Let us boil in our guilt: he didn’t get that singular human gesture wasting away in our bosoms or being lavished on frivolous and intangible nothingness.

I met Hakeem early in 1983, then as a kid devotee of the stage. I was already enamoured by the magnificent care-freeness and the false infallibility of creativity.

When I then confronted the whirlwind called Hakeem Shitta (HS), my bolts came off.

He was the answer to all my questions. He talked earnestly and argued dispassionately. He was not arrested in the spread of his relationships; but in the depth. He showed great attachment to younger friends who seemed propelled by a peculiar doggedness he himself epitomised.

When I became a full-time journalist, he cajoled me until I paid him a visit, in his Amuwo-Odofin (Lagos) home. He wanted me to see his work, his collection, and his forages into areas alien to many of us. I was a feverish student and a young devotee of strangeness or even exotic deviations – I spent hours marveling and poring over years of unflappable industry and steadfast pragmatism. I was hooked by his grit and enthusiasm even when I intermittently got lost in the maze of his mind.

Over the years, we maintained contact, and I remained awed by his personality and phenomenal selflessness. And, much later, events revealed that I was not alone in this estimation.

Then the crisis got to his head. He was said to have hit his head against an auto-part causing only mild abrasion. But the doombell had been tugged. Hakeem had been infected, and it gradually degenerated to what the doctors now tongue-in-cheek refer to as “soft tissue sacoma on the right occipital region”.

They believed he might lose his head, unless there would be a “wide incision including possible ligation of the right sigmoid sinus”. Nothing to worry about. That would be a paraphrase of reassurance coming from Hakeem Shitta. Almost with a child-like adoration of possibilities, a pain assuaged only by unrelenting optimism.

He had almost single handedly pushed himself to effect five neuro-surgeries just to arrest the demon in his head. Five futile attempts after, he was told that more advanced technology, available only outside our shores, would guarantee his recovery and save his scalp. But he needed about N4m!

He began plans to raise the money and get himself healed, and still attain his annual target. Never for once did he contemplate public-spirited charity and publicity campaign. His soul didn’t reject the notion of assistance; he just never gave it a thought.

Even when the reality of his hopelessness got to him and it became imperative that more hands would be needed in securing much-needed funds; he believed he could single-handedly provide and procure all necessary logistical facility. He could write, type, plan, distribute and co-ordinate. He wanted to work to justify why others should sweat for his sake. He grossly underrated treacherous conspiracy of his illness and the unkind Nigerian environment.

When his body eventually failed him, he put his spirit and soul in the service of others healthy enough to sweat. He cracked incredible jokes that poked fun on his disability and invoked strength in his compatriots.

Spiritually, more people were provoked to abandon lethargy and enlist in getting funds and donations. Great souls, big and small, roused by the indefatigable energy and courage of this man of steel, gave their best.

For four months before he left for the London trip in May, 1996, the atmosphere was frenzy and cathartic. The world was forced to notice the potential that could be buried in waste. An expression of understanding and solidarity with a man of steel was released. The air was electric with positive statics.

Briefly, for a year and six months, the world, our world, identified with social and communal responsibility: that in spite of the stress of living, a great soul should never be allowed to be trampled by irascible forces of nature.

The world listened; but soon forgot that a soul laid low by controllable circumstance, is a reaffirmation that we still live in a society where the beasts have outgrown the cute quotes of the survival of the fittest and swiftest! And these last words are exposed to several uninspiring definitions.”

And the man died…yet, these times call for men and women of steel…to overcome the present darkness.