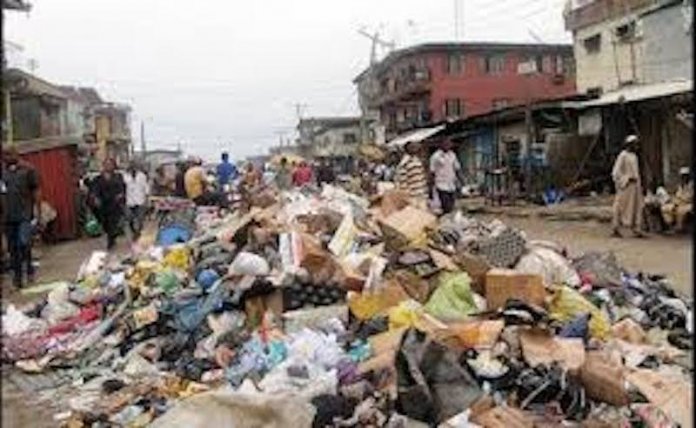 Clean-Up Nigeria, an environment group, in its 2019 report on Nigerian Environment Performance Index Ratings, revealed that over 168 million of Nigerians are still living in an unclean environment.

The study conducted from January 2018 to December 2019, comprised of 15 members who were split into seven teams comprising two persons per team for each geo-political zone, with five international partners that carried out verification tours around the country to monitor and re-evaluate earlier scores submitted by each study team.

The National Coordinator of the National Technical Study Group (NTSG), Clean- Up Nigeria, Prince Ene Owoh, who unveiled the group’s findings in Abuja, said 33 out of 36 states in Nigeria from the average scores derived from the graphic statistical study are dirty and unclean.

He said other indicators used for the assessment included social media and knowledge, attitude and practice of hygiene and sanitation of the populace.

Highlights of the study’s observations revealed that funding by states and local government councils are still inadequate and actually amount to nothing when compared to the work at hand, this he said calls for serious review on the part of governments at all levels.

Owoh said the sanitation and hygiene practices of the people in over 34 states and the FCT still leave much to be desired.

He said: “As the results have shown, Akwa Ibom has emerged the cleanest state in Nigeria for the year 2019, while Abuja emerged the cleanest city in Nigeria beating Uyo, the capital city of Akwa Ibom State, by only two percent (68 percent against 66 percent). In 2019, our studies showed that only five states which scored above 40 percent can be considered to be clean, compared to 2018 when it was only three states and two cities. Abuja and Uyo can be said to be the cleanest from year 2018 to 2019 results.”

“On waste management services provided by the states only five states- Akwa Ibom, Lagos, Ebonyi, Cross Rivers and Abuja-scored an average of 15 percent and above out of the 30 percent.

“On personal hygiene and sanitation, only two states of Akwa Ibom and Cross River scored three percent out 10 percent can be said to come close to the highest level of personal hygiene/sanitation practice,” the report said.