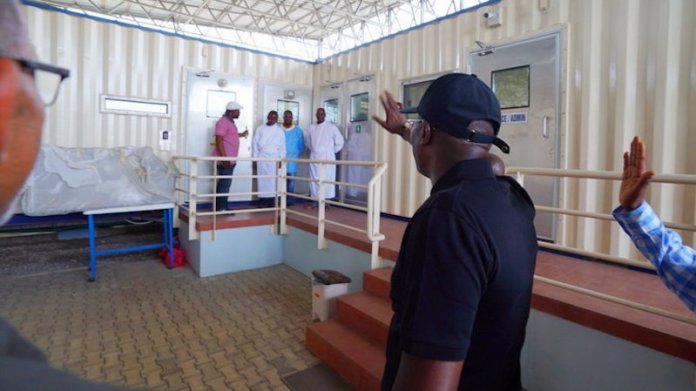 The Lagos State Government has discharged five COVID-19 patients at the Infectious Disease Centre in Yaba.

This brings to eight the total number of discharged patients from the centre since the outbreak of the disease in Nigeria on February 27.

A statement issued by the state government said the survivors included four males and one female.

According to the statement, the survivors were quarantined and treated at the isolation centre for two weeks after testing positive for the virus.

“The survivors who preferred to remain anonymous looked stable and unruffled, saying they felt very happy they had been given a clean bill of health.

“They expressed joy and satisfaction with the State Government and Governor Babajide Sanwo-Olu over the treatments they received at the isolation centre and his proactive approach towards the containment of the virus”, it stated.

According to the statement, One of the survivors (names withheld) said, “I came in here on the 15th and after the test showed positive, I was asked to come back the next day. I was admitted here same day.

“Initially, there were hitches but it later turned out fine. The health workers did fine, all our challenges were attended to. I’m a living witness together with my other colleagues.”

The discharged patient gave an assurance that testing positive for COVID-19 was not a death sentence, advising people not to panic as the virus could be defeated.

“We can beat it, I want to assure others that this is not their resting place. Encourage yourselves, take your medications and in no distant time, you will get out of here.

“I want to appeal to the Federal Government and Lagos State government that, they should remunerate all those workers who have volunteered to work accordingly, so as to serve as encouragement to others, adding that, “If they are not here as first responders, many patients would have died.”

Another survivor said, “I was admitted last Sunday. Initially there were challenges, the following day, they brought bed, mask and some equipment.

“Apart from what my colleague said, the workers should be insured. Proper insurance will let people do what they have to do.”

He narrated a scenario where the workers could not attend to him because he tested positive, saying “they went back and I slept off, I woke up around 3a.m. So they deserve life insurance to encourage them to do their job.”

Meanwhile Governor Sanwo-Olu has received the news of the full recovery of the five patients with excitement.

The governor, in a short message reassured Lagosians that the government was doing all within her powers to curtail the spread of the virus so that life could return to normal.

He said: “we are very excited to hear that five of our citizens in the isolation centre have regained full recovery. It is another pointer to us that with a concerted effort, we can defeat the coronavirus in Lagos and Nigeria.”