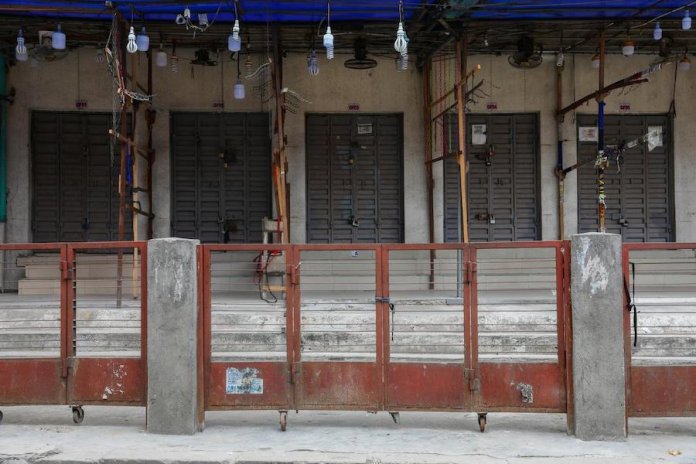 The closure of markets and boundaries by some states as part of the efforts to contain the spread of the COVID-19 pandemic has inflicted economic hardships on residents of the states, THISDAY’s investigation has revealed.

In Bayelsa State, the total shutdown declared by the government has led to the scarcity of basic food items, whose prices have now been hiked between 50 and 300 per cent, especially in Yenagoa, the state capital.

Investigation at Okordia-Zarama, a rural market and Swali market in the urban area of the state capital showed that a four-litre plastic container of garri, which sold for between N500 and N600 before the shutdown, now sells for N1,500.

Frozen fish, meat, vegetables, fruits, and other edible items were also affected by the food inflation. Similarly, the price of food at restaurants has also gone up from N300 per plate to between N400 and N500.

Traders and food vendors blamed the scarcity and high prices on the closure of borders between the state and Rivers and Delta states through which food supplies enter the state.

In Niger State, the curfew imposed by Governor Abubakar Sani Bello has virtually paralysed the socio-economic life of the people as all markets have remained closed for the period of the curfew.

The curfew has also affected the religious lives of the people as all mosques were shut against worshipers on Friday while Christians observed the Sunday prayers at their homes.

The residents of Kaduna are also groaning under the effects of the 24-hour curfew imposed on the state by the state government to curb the spread COVID-19.

Security personnel were deployed in major roads and streets in the metropolis to ensure strict enforcement of the curfew.

Residents said with the curfew, they were finding it difficult to meet basic needs, like food and other necessities.

Many of those who spoke to THISDAY in an interview yesterday, said they had run short of foodstuffs and basic things.

They called on the government to either provide foodstuffs and essential commodities to all residents or come out with strategies to allow people to address their survival needs.

They noted that many people, especially, petty traders, artisans, among others, live on their daily earnings, adding that with the curfew, they are worst hit.

Also, since Ebonyi State Government started the enforcement of its border closure, commuters, and passengers entering the state have been stranded, forcing most of them to meander in the bush for escape.

At the popular Nkalagu boundary, over 10,000 persons were stranded as they were not allowed into the state.

This development created a herculean task for the taskforce team led by the state Deputy Governor, Mr. Kelechi Igwe.

Also as security agencies enforce the closure of the borders of Rivers State, thousands of commuters and vehicles seeking to enter the state are stranded at the borders.

A humanitarian crisis is underway at Mbiama, the border town between Rivers and Bayelsa states, where many stranded passengers are gathered.

As the stay-at-home order announced by Kwara State Government over the Covid-19 yesterday entered its third day, the residents of the state have complained of hardship over the order.

But the state technical committee on COVID-19 at the weekend promised that the state government was planning palliative measures for the poor in order to cushion the effects of the stay-at-home order.

Some of the residents who spoke with THISDAY in Ilorin yesterday on the stay-at-home order said: “It is high time the government fulfilled the promise of providing them with palliative measures in order to avoid untimely death of many people in the state.”
Life in Edo State has also been a tough one especially for those in urban areas.

THISDAY gathered that prices of food items have skyrocketed as a plastic bucket of garri which sold for N700 before the restriction order is now sold between N1,500 and N2,000.

The inability of the people to access money from banks due to long queues has also worsened the people’s woes.

Artisans who depend on their daily incomes to survive and feed their families are said to be the worst hit by the restriction order.

Residents of Kano were also not spared as they scrambled for means of survival two days after the closure of the state boundaries.

The residents of the state had on Thursday and Friday went on panic buying of foodstuffs and other household needs to avoid being caught up in the restriction of interstate movements.

THISDAY gathered that traders at Kwari International Textile Market, Sabon Gari Market and Kasuwar Rimi, have been operating on skeletal operations as the boundary closure affected the economic activities of the state.

The closure of all markets in the Federal Capital Territory (FCT) has also inflicted economic hardship on traders whose sources of livelihood depends on the operation of the markets and neigbourhood centres.

The closure has also presented an opportunity for the FCTA to fumigate them while the markets were under locks.

All the markets that are under the control of the Abuja Municipal Area Council (AMAC) were also closed indefinitely to prevent the spread of the pathogen.

The Chairman of AMAC, Hon. Abdullahi Adamu Candido, who gave the directive, said the closure was to allow for markets’ fumigation.

There is fear, however, that the closure of the market would lead to food scarcity and drive the cost of foods beyond the reach of many.

In Lagos State, people have also experienced hardships due to the restriction of activities in the state.