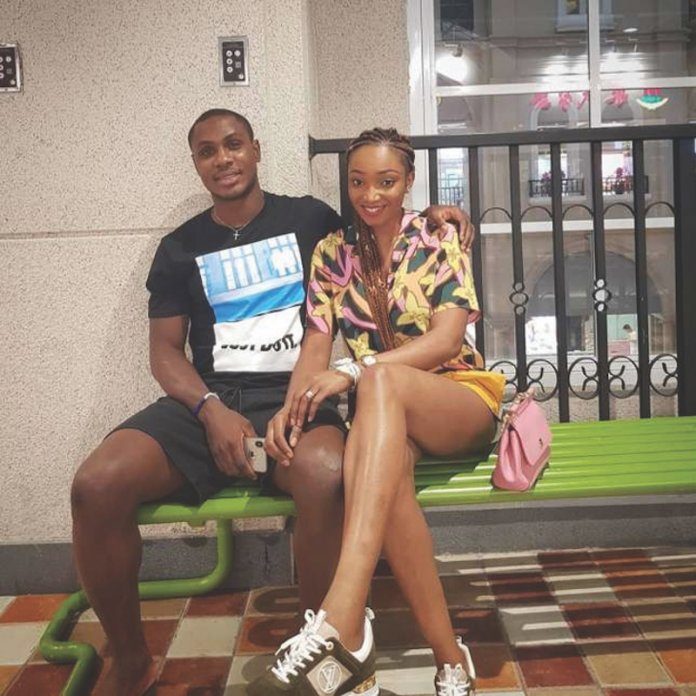 Has former Super Eagles star/Manchester United striker, Odion Ighalo, separated from his wife, Sonia? This is the big question begging for answer as Sonia reverts to her maiden name, “Adesuwa,” writes Ferdinand Ekechukwu

The marital crisis between former Super Eagles/Manchester United of England star, Odion Ighalo and his wife, Sonia has taken a new turn. Ighalo’s wife reignited marriage trouble rumours on March 20, with change of her last name on social media. Sonia reverted to her maiden name “Adesuwa”, weeks after she shaded her husband over his sister’s death. Though, early this month, she suppressed claims of going through a divorce with Odion via an Instatory post which read: “To those of u panicking….Jude and I are still traditionally and above all legally married, No leave no transfer.”

Sonia has however reverted to her maiden name after Ighalo ignored her birthday on March 20. Sonia whose Instagram handle was @sjighalo24 before now, now goes with @desuwa30 on same social media platform.

Last year, Sonia ignited speculation of a marital crisis after dropping shades via her Instastory, in which she alleged that Odion staged a party barely a week after he lost his sister. She also insinuated that he was “celebrating in the name of an orphanage”, while his sister’s children who are now orphans were in deep pain in Canada. Her recent move of changing her Instagram handle from @sjighalo24 to @desuwa30, led to renewed speculation of a marital crisis.

A closer look at the couple shows that they are no longer together as husband and wife. After deleting each other’s photos on their respective social media pages, Odion and Sonia have now taken off their wedding rings and the lady has reverted to her maiden name after the footballer ignored her birthday on March 20, 2020. Although she claimed that her husband woke her up with a birthday call. A quick check same day on Instagram had also revealed that Odion was active on social media, though ignoring his “estranged” wife’s birthday. His last Instagram post shared on March 20 came with the caption “#imissfootball #itmustendinpraise”.

The comment section of the post was however turned off. The footballer has also ditched his wedding and no longer appears with it in public. Reacting to the troll comments that ensued thereafter, Sonia stated that those coming at her never knew her husband when he was in lower clubs and when he missed a goal at the World Cup in 2018. She also insinuated that she was present when Odion signed a six months contract with Manchester United in January.

The Manchester United star met and fell in love with his young wife in Italy more than 11 years ago and they have children.

In 2018, the Ighalos wowed Nigerians with their beautiful Christmas photos. It was during Christmas same year that the footballer celebrated the opening of his mansion and gifts Sonia a brand new Range Rover Sport to celebrate her as well. He posted pictures with friends and family members during the housewarming party. Sonia had also taken to her social media page to share videos of the new building and the celebration on her Insta story.

The beautiful lady also prayed that God should continue to bless her husband. As they used to be the envy of Christmas photos, last year, they never posted any picture of their family to celebrate Yuletide. Rather, the ex-Super Eagles star posted photos of himself alone to wish his fans a happy new year. They also did not celebrate each other on their 10th wedding anniversary last year which was looked out for.

The duo had unknowingly reacted to the trending rumours of their marriage dispute as they deleted each other’s pictures from their Instagram pages. Their Instagram handles further showed that the striker and his wife, who are fond of praising each other on the Instagram, have deleted all the posts that link them together, hence giving considerable room for the roving rumours.

The happenings in the home of the Ighalos never revealed anything strange as it is with most homes where the couple acknowledges each other. To the popular footballer, who made the 2019 Africa Cup of Nations’ top scorer with six goals, “My wife has been very crucial to my impressive career. She has been able to build a good home and she makes me and the children happy. She is everything to me.” A proud family man who has taken his personal life away from football doesn’t talk much about his family and relationship.

Odion’s childhood sweetheart was once asked her challenges of getting married to a footballer. “That one is not easy o,” she responded. “Many people see us in the public as if we are always happy but they do not know what we go through inside but by the grace of God, we are pushing on.” She even took it further to explain that decisions on the moves to make. “Yes, as a wife, we need to decide together for his benefit, for the benefit of the children and for everybody because he is not single but married with three kids. So we always decide what we really want.”

On a different occasion, Sonia noted: “Anytime, before he goes out to play a game, I always pray for him and wish him the very best. It’s been God; He has been so faithful to us and we give Him all the thanks. There’s nothing much that I really do behind but I do encourage him as my husband anytime he’s out there playing.”

Sonia doesn’t take it mildly with any perceived threat or infringement to her home. Instances abound. There was a random lady who showed affection to her husband on Instagram post. Jude Ighalo’s wife swiftly called the lady out, after noticing what the lady wrote to her husband on a social media post about their match against Zambia during a Nations Cup qualifier. The random lady, though appeared to be married with two kids, had called the football star ‘babe’. Mrs. Ighalo took a screenshot of the post and wrote; “Bitch always want to show yourself, @iamhelenbrown #shametowomanhood#olosho”. Another instance when she called out her brother in-law on social media for using their house for a party while they were away. She threatened to disrupt the planned party.

Odion travelled to Europe for the first time after a FIFA agent discovered him, and first played as a professional in Lyn Oslo – Norway where he scored nine goals in 20 games before moving on to Udinese – Italy where he scored a goal in six appearances. Then Granada came calling where he scored 16 goals in 26 matches in a season and also scored 17 goals in 95 appearances between 2011 and 2014 before getting his breakthrough in the English League with Watford.