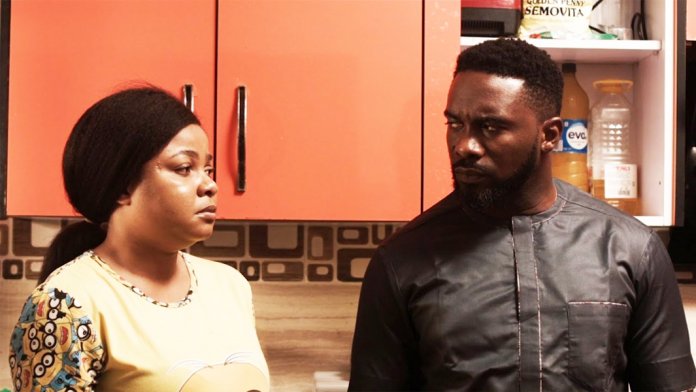 Asides from having one of the longest movie titles in the history of Nollywood, there are other stand out things about A Thousand Ways to Break A Cheating Man that might cause you to want to watch it. Ferdinand Ekechukwu reports

Directed by Kayode Kasumu, and produced by Titi Joseph, the 1hr 57mins feature film also stars Titi Joseph, and Ray Adeka. They say “Men are Scum” but surely a woman can do better. A player meets his match who gets pregnant for him just to teach him a lesson but the unexpected happens, captures the synopsis of the movie which was released February 2020. The review goes thus: In A Thousand Ways, Bimbo Ademoye’s character, Busola, shows the extent of the common saying “hell hath no fury like a woman scorned”.

After breaking things off with her cheating boyfriend, she discovers that she is pregnant and proceeds to move in to his home with him – uninvited – and force him to come along for the ride of her pregnancy journey. Unbeknownst to him, however, it’s not just the two of them on this journey as Busola has turned their lives into an internet reality show that plays live for her audience every day. The concept is actually quite interesting and hemmed by the capable hands of Ademoye and Arukwe. It’s almost inevitable that it will tug at some heartstrings – if not all.

Arukwe, as a lover boy, is a find that has crept up on us but it’s not unwelcome. In his introductory scene, where Ademoye’s character is basically drooling over him, the audience is actually convinced of his ‘hotness’, if her reaction is anything to go by. It’s nothing like the difficult transition of seeing OC Ukeje objectified in ‘Alan Poza’. Uzor Arukwe, however, doesn’t just bring the looks, he brings the emotions as well. When he is a ‘Yoruba demon’ he sells it and you believe it, and right when he starts to convert to an angel, you feel it in his performance before it is made obvious.

Bimbo Ademoye is quickly becoming everybody’s screen favorite and in a movie like this it’s easy to see why. The ease with which she becomes Busola and takes the audience along for the journey, as well as the moment when she begins to reconsider her actions and finds herself fighting her emotions, Ademoye’s act is easy to believe and is easy to love. Then there was who played Arukwe’s mother, Jaiye Kuti. It will be an actual atrocity to speak of the movie and not mention her.

In her few scenes, she manages to not only command the screen but also steal some of the audience’s love. Needless to say, we are excited to see her in something else and see just how well she does in other roles. The movie as a whole is a journey that doesn’t really lose steam at any point. Maybe the steam starts to wane somewhere towards the end but it never entirely fizzles out to the point where it’s a drag. The story, though based on an unoriginal concept, still manages to surprise in a couple of scenes until it leads to the inevitable conclusion. Speaking of the conclusion, it was a bit rushed but it is hard to complain because if the film lasted any second longer than its run-time, then many heads would have ended up nodding off.

The execution of the film is many notches from perfection. For instance, there were many scenes that could have done with better lighting, and multiple moments of inconsistent audio – but be that as it may none of it took away from the beauty of the film.

The writing could have been more streamlined and concise to take this from good to great, but even here it does a fair enough job of being memorable.