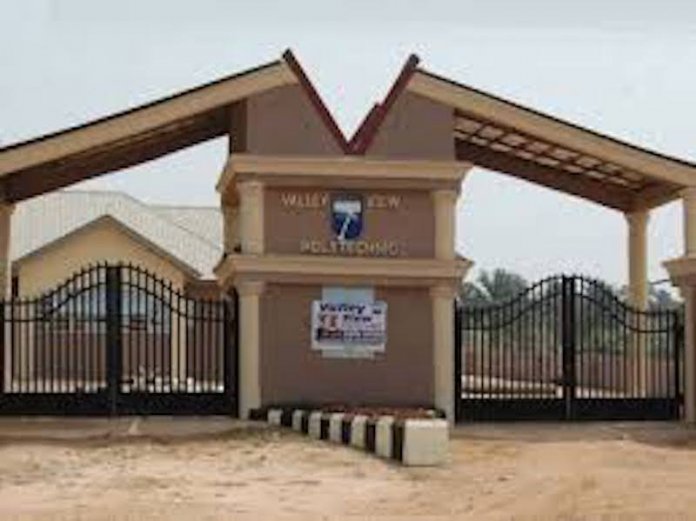 Teaching and non-teaching staff members of a privately-owned Uyo City Polytechnic in Uyo Local Government Area of Akwa Ibom State have shut down the school over non-payment of 21 months’ salary arrears.

The gates of the school were shut as palm trees, signifying a traditional injunction, and placards with different inscriptions were placed at the school gate yesterday.

In a notice dated March 16 and pasted on the school gate, the Rector of the polytechnic, Mrs. Idem Iboro, directed staff and students of the institution to proceed on a two-week break starting from March 16, pending when the issues leading to the closure of the school will be resolved.

It said: “This is to inform all staff (apart from those on essential duties) and students to proceed on a two-week break starting from today, Monday 16/3/2020.

“We regret any inconvenience this may cause. We appeal to everyone to remain calm as the pending issues will be resolved amicably.

“Activities at Uyo City Polytechnic will resume fully on March 30, 2020.”

When the Rector of the polytechnic, Iboro, was contacted, she said: “I came this (yesterday) morning and I saw the barricade, so I put up the notice. I am still investigating the matter.”

One of the staff of the institution, Dr. Udofia Jacob, who is a senior lecturer of the Department of Mass Communication, said he was in school early in the morning to sign the time book, but was told by some staff to leave the premises.

He stated that for 21 months, no member of staff has received any salary even though they have been working, adding that the proprietors of the school and the consultant have unresolved issues which have affected both staff and students and led to the closure of the school.

“We are so aggrieved because we have been owed for 21 months, and the issue has escalated to the point that we don’t even know who we are answerable to anymore.

“The old management smoothly handed over to Mr. Ekot the new management on September 2, 2019, but along the line, we started having some issues.

“We had a memo sent by the Chief Consultant who said we should regard Uyo City Polytechnic as not been owned by him. We heard that problem started when the proprietors were asking for another review of the agreement.

“We were meant to understand that the school owed ICT N5 million, and the polytechnic account was held by the court, and based on that, we stayed for months without receiving salary.

“From the court order, the Chief Accountant, Mr. Uko, told the staff to remain calm pending when the issue would be settled. Now we are told that the chief consultant had withdrawn the agreement he had with the former proprietors.

“We remain completely frustrated; we had no cause to jubilate anymore because we could not even see our salary or anything coming to us.

“We have managed to keep working till March, even as January and February salaries have not been paid, and nobody has come to address us on what is happening until last Friday, when we noticed the change.

“On Monday, as I was about to go to the office to sign in, one of the workers told me not to go in or else they would beat me up,” he stated.

Vice Chairman of Nduetong Oku Youth Forum, Marshal Effiong, blamed the proprietors of the school for the closure of the institution.

He said, “Uyo City Polytechnic was mismanaged by the proprietors. They owe the staff 21 months’ salary, and God sent Emmanuel Ekot to take over the school under an agreement. The man took over in September 2019 and changed the face of the polytechnic.

“He spent N46 million to renovate the school but after paying two months’ salary, the proprietor said the agreement was not properly signed, and called for a new agreement.

He even denied his signature on the agreement, saying they should sign a new agreement, and as a result of that, Ekot stopped his work in the place as he had started taking care of the welfare of staff.

“Due to the feud between Ekot and the proprietor, Ekot decided not to manage the school again, that is why the academic and non-academic staff decided to lock the gate,” he said.