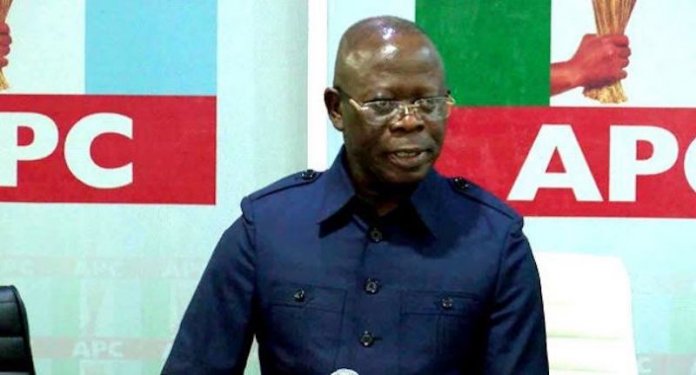 Vanessa Obioha writes that the insistence of some state governors to determine the outcome of the party’s selection process for candidates in the 2023 national elections may be the reason they are campaigning for the removal of Adams Oshiomhole as National Chairman of the All Progressives Congress; an action that will only spell doom for APC

There is no doubt that the National Chairman of the All Progressives Congress (APC), Comrade Adams Oshiomhole has demystified members of the party who considered themselves demigods, since he assumed leadership in June, 2018. A good illustration of such actions is his fight with the former governor of Imo state, Rochas Okorocha who wanted to rubbish the image of the party by imposing a relative to represent the state in the last governorship election. Okorocha had already proclaimed himself the Messiah of Imo state and therefore sought to retain his exalted throne by parading a puppet to replace him. His chosen successor was his son-in-law, Uche Nwosu. However, his plans hit a stumbling block when Oshiomhole kicked against his moves, allowing the party to choose other contenders for the seat.

If not for Oshiomhole’s combative manner that truncated Okorocha’s anti-party moves, APC would have been a laughing stock in the South-eastern state.

The same drama unfolded in Ogun state when former governor Ibikunle Amosun plotted to hand over the governorship baton to one of his favourites. Such activities only speak volumes of the selfish interests of members.

Apart from his commitment to instill discipline in the party, it is on record that under Oshiomhole’s leadership, APC maintained its winning streak in the 2019 presidential election and would have exceeded expectations in the governorship election if not for the discordant voices that refused any form of harmony. For instance, the crisis in Zamfara is a result of the rift between the former governor Abdulaziz Yari and Senator Kabir Marafa. Oshiomhole’s attempt to resolve the case only fetched him more animosity. Little wonder that Marafa alerted the public on the alleged plot to oust Oshiomhole from power last year

“It is evident that the plot to unseat Comrade Adams Oshiomole by a gang of President Buhari’s adversaries has thickened. This plot is merely aimed at hijacking the party structures and handing it over to Yari – who till now is the arrowhead of all the people that harbour a lot of bitterness against the president,” Marafa said last December.

Yari denied the allegations expectedly but more reports followed, insisting that the growing number of detractors of the former governor of Edo state are busy plotting and countering moves that will put the suspended chairman in good light. In their own estimation, the party is better off without a leader whose goal included ridding the party of selfish and corrupt members.

The removal of Oshiomhole will only spell doom for APC. The party is already suffering from an ego implosion. The midnight meetings and closed-door whispers are only a spectre of the pending disintegration. As much as the detractors who have been working tirelessly to unseat Oshiomhole since last year would like to portray their actions as a collective good for the party, there’s no uncertainty that it is for their personal interest.

The mood at the Eagles Square on morning of Sunday, June 24, 2018 was upbeat when Comrade Adams Aliyu Oshiomhole, former Governor of Edo State was sworn in as the new National Chairman of the All Progressives Congress (APC). He came highly recommended having had a relatively successful two four-year tenure as Chief Executive of Edo, which culminated in the triumphant emergence of Godwin Obaseki, as governor.

Once the baton of leadership of the party was firmly in his grip, Oshiomhole attempted to establish the supremacy of the party, vis-à-vis the rule of collective bargaining-a process he was conversant with, having been a labour leader for years. Conversely, the purveyor of individual interests which had held the party captive for so long were unyielding in their bid to maintain the status quo.

One month after, he threatened to suspend the Labour and Employment Minister, Dr. Chris Ngige over delay to inaugurate the board of some parastatals under his ministry. He made it clear that he would not foot drag on the issues of discipline. Not a few were rattled by his statement; “If the Minister refuses, we will suspend him from the party. We must return to internal discipline. For me, it is the height of mischief for any Minister, you cannot purport to be an Honourable Minister and you act dishonourably. Nobody is greater than the party.

It was an unmistakable notice to the discerning that a new Sheriff was in charge of the affairs of the party. About five months later, it was time for the primaries of the APC across the country. Much of this selection process for the party’s candidates in the 2019 national elections became emerged in controversies. In one instance, the National Chairman of the APC was reportedly detained by the Department of the State Services (DSS) on allegations made by certain governors that he received bribe to manipulate the party’s primary elections.

Conducting a hitch-free primary became Oshiomhole’s biggest headache on account of the insistence of state governors to determine the outcome of the selection process. Many APC state governors took their fight to party’s National Chairman, for refusing to play it according to their script. Among those who challenged Oshiomhole openly were former governors Ibikunle Amosun, Rochas Okorocha, and Abdulaziz Yari of Ogun, Imo and Zamfara states respectively whose bid to install their favoured successor failed.

However, Oshiomhole stoutly stood his ground and continued to draw attention to his most cherished achievements. “We the executive members of the party were sworn in on June 3, 2018, at about 6 p.m. Two weeks later, we went to Ekiti to contest election against a PDP incumbent governor Fayose and we won. Kayode Fayemi today is the governor of that state. Few months later, we went to Osun State, we contested a by-election. We won and we had the Osun State governor elected for his first term. Then we went for the national elections. You know all the tensions in the country at the time. The gap between President Buhari and the former candidate of the PDP Abubakar Atiku was about four million voters. The one between President Buhari and former President Jonathan in 2015 was about three million. Under my leadership, this President has more votes than the first runner-up. We would like to claim credit for that because if it went the other way; we would be crucified,’’ he said.

Another attainment which Oshiomhole likes to gloat about is the defeat of the immediate past Senate President, Dr. Bukola Saraki in Kwara State. “We went to Kwara, we did ‘otoge’ (enough is enough). We uprooted Saraki and you cannot commend me for this? Do you know who Saraki is? If you are talking of the smartest political player, seasoned smart guy, he is. But for every smartness he has, I have a superior smartness. At the end of the day, who won?”

Any observer of the political landscape in Nigeria would easily concur that APC enjoyed a certain degree of decorum since Oshiomhole became chairman of the party. He spoke a language that most corrupt members of the party were unused to. He crushed egos and promoted selflessness. Not one to cavil at his opposition’s remarks, Oshiomhole aims at professionalism and excellence, two traits that have accompanied him since his days as a union leader. His ultimate objective is to ensure that the party’s structures and ideals are maintained and not used to serve selfish interests. This was clearly seen in his first public speech after the High Court ruling.
Oshiomhole said that he was more concerned about his legacy than the title.
“I worry more about what I will be remembered for when I was chairman rather than how long I was chairman.”

But he need not worry about this. His impact would be felt by many and even his traducers are likely to regret their steps. At least, none can accuse him of promoting anti-party policies or embezzling funds.
He is aware of the battle ahead but he is not having sleepless nights over it.
“Whatever you do, those who want to fight you will fight you but I know that my tenure will be defined by God and not man,” he said at that public address.
His confrontational style might have yielded him more friends than foes, his loss will cost APC more than just a title.

However, those who started the current round of troubles for Oshiomhole think differently. Incidentally, they are from his home state. “There will be peace in Edo state,” are some of the jubilatory comments that have greeted the suspension of the National Chairman of All Progressives Congress (APC) Adams Oshiomhole by a Federal High Court in Abuja recently. Justice Danlami Senchi of the court in Jabi ordered Oshiomhole to step down on March 4, pending the determination of the substantive suit by Edo state chapter of the party seeking his removal as the APC chairman.

The ongoing drama is evidence of the crisis that pervaded the party which Oshiomhole tried to resolve.