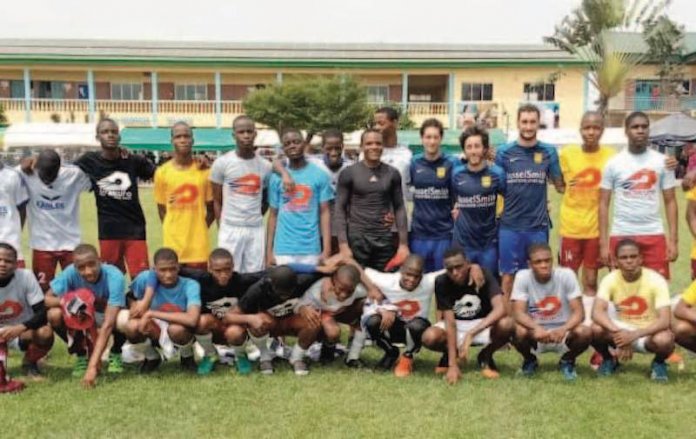 After successful participation in the Free Football Clinic conducted by FC Bulmaro, held at Saint Francis Catholic Secondary School, Idimu, Lagos, recently, that left a memorable impact on the participants, Okakuro, a sports performance wear, known for, elegance, experience and professionalism has decided to go full blast with the young club, established as a platform for discovery, opportunities and empowerment, that has so far done incredible well both locally and internationally, in helping others live their God-given dreams, adding value to the entire human community.

Speaking on behalf of Okakuro, Idemabasi Mkpokporo, Director, Communication, Development and Growth, stated that firm had been quietly involved in novel impactful and value-adding social investment programmes and projects in area of leadership and sports, with the quest to achieve the much envisage positive revolutionary change, especially among the teeming youth population that is swelling by the day, which if not well-nurtured, encouraged, motivated and genuinely empowered would be too unease to be a part of. Thus, aside from creating employment through what we are doing, we invest genuinely in interested people, to help them in any way legally possible to make them better human beings, who in their own little ways will yield positive and impactful returns in their thoughts, words and actions, all swinging on the hinges of true charity and real love devoid of any form of bias or affiliations.

“Ours is about helping others – the helpless, vulnerables, discover themselves, exposed them to global opportunities, guiding them steadily on the path to excellence, better economic life and greatness.

“After thorough assessment and monitoring, to our greatest delight FC Bulmaro, the club, which a few weeks ago conducted trials for youths who are talented and interested in the business of playing football, has been very consistent and open in her approach in this direction. Integrity is very important this we value very highly because the brand Okakuro, is the prime minister of performance sports apparels. Though very new in this clime, but fully genuine. We are here to help ourselves, primarily growing, and to better others without any form of threat,” she explained.

She further revealed that for this season and for the Mediterranean Cup tournament in Barcelona, Spain, coming up soon, Okakuro has taken full sponsorship for the complete kitting of the entire team and the technical crew.

In his reaction, Gonzalo Dibiasi, the club head coach said that the team was not surprised about Okakuro’s interest in the young team, because the club was well structured and supervised, highly economically supported as a sustained platform of opportunities for all who were very good and talented to discover themselves, maximise on available opportunities, not only for their individual good, but for the betterment of their families and the society they live in.

“As long as our promoters be who they have willingly chosen to be – kind-hearted and truly generous, FC Bulmaro, is a platform of not only opportunities, but, equal. Be the person female or male. Black or whatever colour, with creed or none , the club passionate quest is to see our brought ups play or lead across the world in higher and widely acclaimed sports theatres. It will be the club promoters and the crew to be a part of legendary success stories,” he emphasised.

In another development, Benjamin Ashaka, a top official of the club pointed out that Okakuro is very meticulous and smart in its approach to things, to be able to see the genuineness in what the club is doing in the area of youth development and sports, in this case schools sports and the huge potential in the club, with reference to talents discovery, development and growth. For these young folks, for us the future is assured.

“Our primary intent of berthing the club is to help others live their dreams, while enjoying ourselves in the Godly bliss of generosity. Thus, more of this kind of partnership support will spur us to not only do more, but better, easier and bigger things. The FC Bulmaro Free Football Clinic is a nationwide project, with schools accepted to the project in the Catholic Archdiocese of Lagos as a landing pad,” Ashaka said.

He commended Okakuro and called on individuals and groups who have the ability and the will to invest in the children to do so, an idea, he is convinced will better the society for the good of us all.