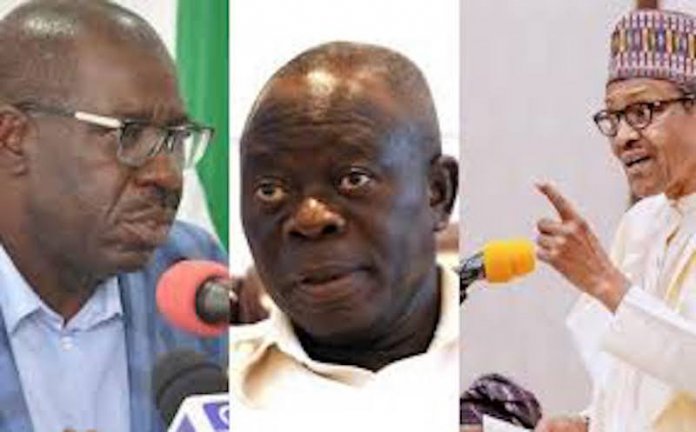 Adibe Emenyonu traces the origin of the challenges confronting the National Chairman of the All Progressives Congress, Comrade Adams Oshiomhole and why his enemies want him out by all means

It is no longer news that the growing number of opponents to the National Chairman of the All Progressives Congress (APC), Comrade Adams Oshiomhole is swelling in geometric proportion daily. What is more worrisome is that those seeking his neck are members of his household which fulfills the biblical saying that a man’s enemy shall be members of his household.

Oshiomhole’s travail can be traced to his home state, Edo before other external forces capitalized on that to give him a run for his office.

Without the connivance of adversaries within, the external forces may not have the will power to strike.

Empires don’t fall because of external aggression only. The first sign of their fall is usually from internal crisis which allows external aggressors to unleash terror and take over

Since the nocturnal inauguration of the Edo State House of Assembly in June last year and imposition of minority rule, the state has never experienced peace and efforts to reverse that is what has pitched Oshiomhole against those who think otherwise.

Since then, there have been different incidents of harassment against Oshiomhole. One of such is his by those believed to be agents of the state government.

When that was not enough, some party thugs allegedly working under the supervision of the state government attacked the convoy of the Oba of Lagos, Oba Akiolu II just to embarrass Oshiomhole.

One may also include the Benin Airport Road show to prevent the rally planned to usher in Pastor Osagie Ize-Iyamu from the Peoples Democratic Party (PDP) to APC. Apparently not deterred, bombs were introduced into the entire brigandage.

Before this time, three members of Oshiomhole’s Ward 10, Etsako local government area of Edo State, purportedly suspended him as the National Chairman of APC. This action was said to have been affirmed by the local government and state.

But before this time, 12 out of the 17 members of State Working Committee (SWC) of APC in Edo had removed Anselm Ojezua, as chairman which was ratified by the NWC-led by Oshiomhole.

This ding dong continued on party level at all levels until the recent court pronouncements on Oshiomhole’s position which has changed the equation of politics in APC as a party that does not abide by the rules it set for its members.

Little wonder when the news broke on the suspension of Oshiomhole by an Abuja High Court, it was only Edo State government that jubilated.

Expressing their joy at a rally immediately after the court ruling, the joyous Governor Godwin Obaseki said with this, “there will be peace in Edo State.”

Oshiomhole’s problem worsened because he neglected the local forces against him by allowing other national and vested interest who see him as a stumbling block to actualize their 2020 ambition. In other words, he is faced with two opposing forces: Those who think his continued stay in office would obstruct their 2020 reelection in Edo State; and those outside who want to position themselves for elective positions.

But the question is, even if the outside forces succeed, how will Oshiomhole’s removal favour those who want him out locally?

Similarly, just as some forces both at the local and national level are fighting him, a good number of APC members at home still see Oshiomhole as their icon and have vowed to resist any move by few persons to undo him.

Addressing the media in Benin City, Thursday, March 5, five of the party governorship aspirants declared support for the National Chairman.

The aspirants carpeted the celebration mood displayed by Governor Obaseki when the interim order was granted, vowing to swim or sink with Oshiomhole.

Speaking on behalf of others, Pastor Osagie Ize-Iyamu said, “Adams Oshiomhole is an asset to the APC in Edo State and Nigeria and we will resist any attempt to remove him.

Ize-Iyamu accused Obaseki of introducing violence into the politics of the state, saying he was shocked that Obaseki and his supporters were always celebrating any misfortune that befalls the party and people of the state.

According to him, “What we find very shameful is the jubilation in some quarters in Edo state yesterday (Wednesday) over the so called court order, I was ashamed to see the governor of Edo State elected on the platform of the APC rejoicing that an eminent son of Edo state, the former governor of the state; the man who God used to put him there, the man who campaigned for him, the man who spoke for him everywhere they went, I was ashamed to see the jubilation and singing all over Benin that Adams Oshiomhole has been removed as National Chairman.

“We want to ask, does the removal of Adams Oshiomhole even guarantee a second term ticket for him? It shows how shallow they are in their thinking. A man who glorifies in Edo people being removed from office, can we allow him to remain in office? You will remember the same jubilation took place when the NDDC Board was suspended.”

Ize-Iyamu said Obaseki and his supporters did the same when APC lost its governorship victory in Bayelsa state.

On ban of rallies Ize-Iyamu said out of desperation, the state governor announced that he has banned rallies in the state adding that where Obaseki derives such authority is yet unknown as according to him, in a civilian dispensation, there are rules and procedures.

“Only yesterday, he held a rally at Urokpota Hall in Benin. The governor cannot be doing rallies and tell us that we cannot hold rallies. We want to put him on notice that we will begin to hold rallies and we are waiting for him as the emperor of Edo state to put us to jail.

“Our disposition to peace is not a sign of weakness because those that speak violence cannot sustain it if it were to erupt,” he declared

Similarly, leaders from the three senatorial districts of the state said it was ridiculous that the court relied on a document purportedly signed by three persons out a 27 member ward executive to give such an order.

State Publicity Secretary of the party, Chris Azebanmwan said there are several Supreme Court judgments that makes crisis in a political party an internal affair of the party.

Former Attorney General of the state, Hon Henry Idahagbon called on President Muhammadu Buhari and other leaders of the party to rescue the APC from the “stranglehold” of Obaseki.

He said: “I want to make an appeal to the National Leader of the party, President Muhammadu Buhari and our National Leader Senator Ahmed Bola Tinubu that we the APC members in Edo state have suffered for too long under the dictatorship of ‘Major General’ Godwin Obaseki. The National leaders should not wait for all of us to be crushed before they come to our aide it is time they must intervene in what is happening in the party in the state.

“After using the party apparatus to come to power has totally alienated all the party members. He has been throwing bombs at us. I am a recipient of 2,900 pellets of bullets directed at me in my office so the party leadership should not wait for him to kill us before they intervene. We are preparing for election and we have aspirants that can win election and manage the party.”

Responding, Governor Obaseki charged Ize-Iyamu to clear himself of the heavy burden of the N700 million election related fraud case hanging on his neck before dabbling into the affairs of the state APC. In a statement signed by his Special Adviser, Media and Communication Strategy, Mr. Crusoe Osagie, Obaseki noted that Ize-Iyamu is not a member of APC and does not qualify to speak.

The governorship aspirants are not the only ones in solidarity with Oshiomhole. Recently, the party zonal officers, in a statement, signed by InI Okopido, APC Chairman (Akwa-Ibom); Amos Jothan, (Bayelsa); Sir Ochola (Cross River), Prophet Jones Orue (Delta), Col. David Imuse (rtd), Edo, Senator Ovie Omo-Agege, Deputy Senate President and leader of APC South-south and Ntufam Hillard Eta, APC National Vice-Chairman, South-south, made it clear that they stand by Oshiomhole and cannot watch mischief makers treat a duly elected national chairman of the party with disdain adding that any unprovoked attack on Oshiomhole is equally an attack on the zone which cannot be tolerated.

The statement also added that the south south zone of APC completely dissociates itself from the illegal and unlawful NEC meeting purportedly convened by persons they described as unauthorised and advised all NEC members from the zone to ignore same as it does not have the blessings of the leadership of the zone.

Oshiomhole’s problem worsened because he neglected the local forces against him by allowing other national and vested interest who see him as a stumbling block to actualize their 2020 ambition. In other words, he is faced with two opposing forces: Those who think his continued stay in office would obstruct their 2020 reelection in Edo State; and those outside who want to position themselves for elective positions