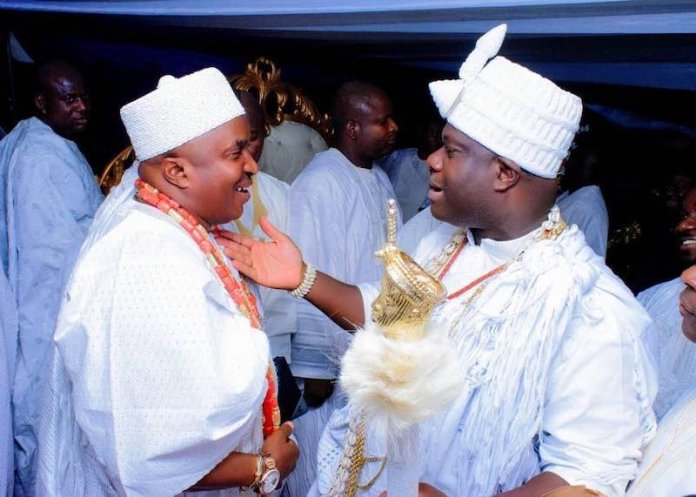 Chiemelie Ezeobi writes that the recently celebrated Aje Festival 2020, which held at the ‘cradle of humanity’ in the ancient city of Ile-Ife, was not just about touching base with culture but also afforded Brazilians and Africans the opportunity to trace their roots

On a certain Monday, the Arole Oodua and Ooni of Ife, Ooni Adeyeye Enitan Ogunwusi, Ojaja II, with white pigeons, symbolising purity and peace, in his hands led a procession from the palace ‘Ile Oodua’ to the Aje shrine known as ‘Idi Aje’, and released the birds into the air.

It was symbolic gesture to herald the 2020 Aje Festival at the shrine which is located a kilometre away from the palace. Before the birds were released, prayers for the economic and commercial prosperity of the Oduduwa race worldwide and Nigeria in particular were made.

In line with the festival, recently, all roads led to the ancient city of Ile-Ife believed to be the cradle of humanity as the Ooni, who also doubles as the co-Chairman of National Council of Traditional Rulers of Nigeria(NCTRN) and the natural father of the entire Yoruba race worldwide, led thousands of Ife indigenes, market men and women, tourists, financial experts and business tycoons from across Nigeria and abroad to celebrate the festival.
The organising committee led by Dr Toyin Kolade did not leave any stone unturned in making the festival a success. As one of the 401 gods and goddesses like Ogun(iron), Osun(water), Kori(children) and Orunmila(divination), Aje is a deity in charge of wealth and economic prosperity with great positive influence on the world’s economy.

According to the palace, the deity of Aje is in charge of wealth, commerce and economy just like Ogun is in charge of iron and Osun is in charge of waters. The festival annually holds on a Monday traditionally known as ‘Ojo Aje’ in Yoruba parlance. During this Aje Festival, participants including foreign tourists, business men and women would purchase a white pigeon each.”

The festival also afforded Brazilians the opportunity to trace their roots. It will be recalled that Princess Kolade led a royal team to Brazil in August last year advancing the cause of Aje Festival where fruitful discussions and meetings were held with government of the city of Rio and other cultural tourism stakeholders for collaboration on the festival in furtherance of the Cultural Tourism Revolution Agenda of the Ooni.

In his speech, the Ooni urged governments at all levels to raise the standard of living of citizenry through favourable economic policies.
He decried the current economic condition of the country which he described as pathetic, adding that the country’s wealth must be be enjoyable to all Nigerians.

“As it stands today, Nigeria has a population of few men and women controlling the economy while countless others are languishing in poverty. We cannot continue like this. For us to progress as a country, we must ensure that our wealth goes round especially to the poor and other vulnerable members of the society. We cannot keep having strikingly rich few Nigerians and uncountable ones wallowing in abject poverty.”

While explaining the basis for the Aje Festival celebrations, the African foremost monarch explained that it is a unique way through which the Yoruba people globally remember the deity which is known for wealth and riches.

He said: “Aje is a deity which is known for wealth and riches. It is annual celebration as you have witnessed today is to acknowledge its relevance to us as people, especially its indispensable nature to us. Did you see the struggle for it during the procession to and from the Aje temple? That is the spirit of Aje, all of us are not rich because it is not easy to accumulate wealth.

“We are not devaluing the currency by spraying it to our people, we only do it on a special day like this to spread happiness. In the olden days, it was cowries, sometimes ago it was coins, nowadays it is naira notes and we hold it in a very high esteem.”

Also speaking, the Lowa Adimula of Ife, High Chief Adekola Adeyeye, described the 2020 Aje festival celebration as the best in history, thanking the Ooni for upholding the cultural values of Ile Ife and Yorubaland.

The festival climaxed with a dinner party at the banquet hall of the palace where guests and the foreign tourists were entertained by the Apala music maestro, Musiliu Aruna Ishola.