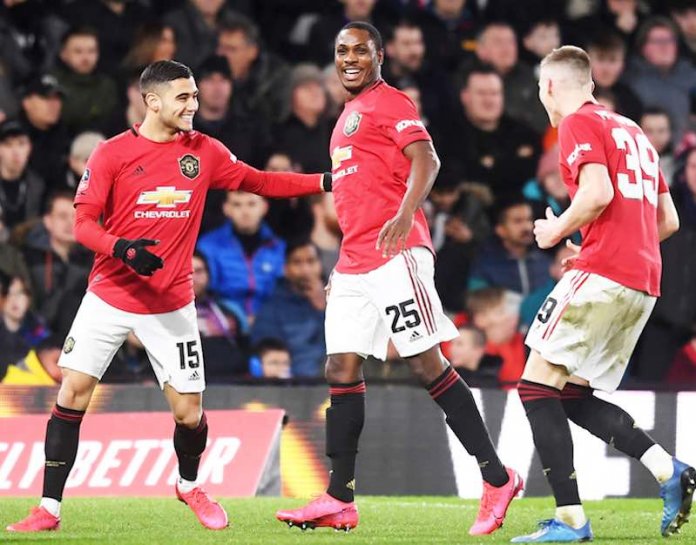 Local rivals Manchester United and Manchester City will meet for the fourth time in the space of three months when the Red Devils welcome the reigning champions to Old Trafford today.

United currently boast the bragging rights for the season with two wins to one, but they sit 15 points behind today’s visitors in the Premier League table and know that anything other than a victory could harm their hopes of qualifying for next season’s Champions League.

The 182nd edition of this derby may not carry as much weight as many of the recent meetings when it comes to the destination of the Premier League title, but it still promises to be a significant one for United in particular.

The race for Champions League football next season continues to be hotly contested with only three points separating four teams between fifth and eighth, while Burnley, Arsenal and Everton cannot be counted out just yet either.

Man City’s European ban could be cause for double celebration as far as United are concerned if they do end up finishing fifth – the position they currently occupy – with that enough to earn a seat at Europe’s top table as things stand.

However, the Red Devils will need to hold off stiff competition from Wolverhampton Wanderers, Tottenham Hotspur and Sheffield United, the latter of whom arguably hold the advantage at this stage given their game in hand over the teams above them in the table.

Man City’s appeal against the ban does mean that a question mark remains over whether fifth place will be enough, though, and Ole Gunnar Solskjaer will no doubt be urging his side to exploit Chelsea’s inconsistency and bridge the three-point gap to the top four over the final 10 games of the season.

United are certainly going into the business end of the campaign in good form; Thursday’s FA Cup cruise at Wayne Rooney’s Derby County booked their place in the quarter-finals and made it nine games unbeaten across all competitions, during which time they have kept seven clean sheets and conceded only two goals.

Solskjaer will justifiably argue that they should have only conceded one goal considering David de Gea’s gift to Dominic Calvert-Lewin in the 1-1 draw with Everton last time out, although a contentious VAR call then denied the Toffees a late winner at Goodison Park to keep United’s unbeaten streak intact.

The 20-time champions will be looking to get back to winning ways in a double-header which sees them face Man City and fellow Champions League hopefuls Tottenham Hotspur in their next two top-flight games, while a Europa League trip to LASK Linz is sandwiched between those two matches.

It is a relatively kind run-in for United after that, though, with Sheffield United and Leicester City the only teams currently in the top half that they will have to face in their final eight games of the campaign.

A positive result against City this weekend would be a bonus to some extent, then, although Solskjaer has already got the better of Pep Guardiola in two of their three meetings this season, both of which came at the Etihad Stadium.

However, City’s record at Old Trafford has been superb in recent years, while their most recent defeat to United was made irrelevant by the first-leg victory in that EFL Cup semi-final as they booked their place at Wembley courtesy of a 3-2 aggregate triumph.

Both teams have injury doubts hanging over key players, with Kevin De Bruyne and Harry Maguire both facing a race to be fit in time.

Guardiola has a decision to make regarding who leads the line; Gabriel Jesus scored the winner in their last league outing whereas Sergio Aguero netted the only goal of the game in midweek.

That strike means that the Argentine has now scored 23 goals across all competitions this season – more than any other Premier League player – while he also now has 254 goals in 367 appearances for City, one more than United’s record scorer Rooney managed in 559 games for the Red Devils.

At the other end of the spectrum, Raheem Sterling will once again be looking for his first ever goal against United, having drawn blanks in all 19 of his previous meetings at Liverpool and Man City – by far his worst run against any opponent.

For United, Anthony Martial could be pushed out wide after Odion Ighalo scored twice in midweek, with the January loan arrival staking his claim for a first Premier League start since New Year’s Day in 2017.

Unusually, the home side has failed to win seven of the last eight editions of this fixture, with one draw and six away victories in that time.

That includes three consecutive Man City victories at Old Trafford in all competitions, and another away win this weekend would see United lose four home derbies in a row for the first time since February 1931.

On the flip side, United could win back-to-back matches against Man City for the first time in a decade, while 2009-10 was also the last time the Red Devils did the double over their local rivals.

The reverse fixture at the Etihad Stadium saw Rashford and Martial earn United a 2-1 victory in December, with Nicolas Otamendi pulling a goal back for Man City