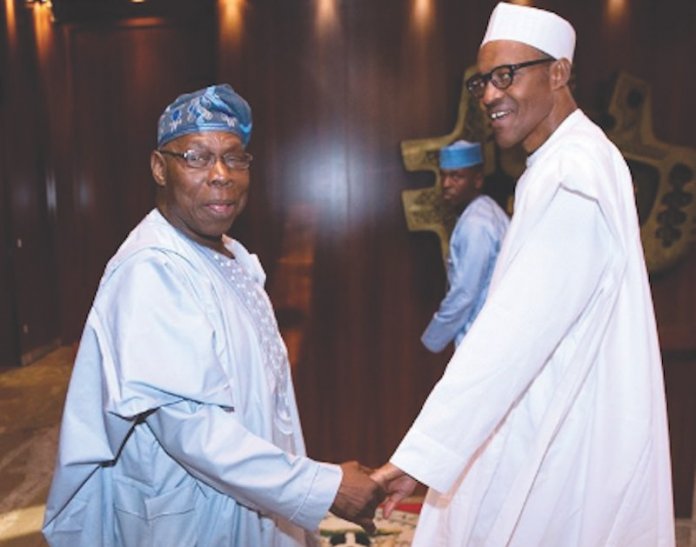 Last week’s call for restructuring by President Olusegun Obasanjo might have changed the tenor of this age-long debate, writes Samuel Ajayi

Shortly after the return to civil rule in 1999, the ever politically vibrant Southwestern region of the country was unrelenting in its push for what it called restructuring of the Nigerian federation.
The argument then was that the federation was very lopsided and there was too much powers concentrated in the centre, which had made the other federating units very weak.

Those at the forefront of this campaign were leaders of the National Democratic Coalition, NADECO, which fought the General Sani Abacha junta to a standstill. NADECO was to give birth to the Alliance for Democracy (AD), which was one of the three political parties registered in 1998.
The AD actually made restructuring and devolution of powers one of its campaign promises as it promised a comprehensive restructuring of the country if voted into power.

The party, which went into alliance with the All People’s Party (APP) to field a former Secretary to the Government of the Federation, Chief Olu Falae, as its presidential standard bearer never won the Presidency.
But that did not deter its leaders from continuing the campaign for the restructuring of the federation.

The likes of the late Senator Abraham Adesanya, Justice Adewale Thompson, Senator Mojisoluwa Akinfenwa, Senator Olabiyi Durojaye, Comrade Ola Oni and not forgetting former governor of Lagos State and current national leader of the APC, Senator Bola Tinubu, never lost any opportunity to drum home the point that the nation needed to be restructured for any meaningful development to take place.

In fact, the call was actually for the nation to return to regionalism so that each region could develop at its pace. It was also pushed that there was need for fiscal federalism. By this, each region would be in charge of its own natural resources and would only be paying royalty to the centre unlike the present system, whereby all proceeds from oil and gas sales go into the federation account after which a percentage of the proceeds would be shared among states and local governments based on population and, at times, land mass.

The case went to court and the Supreme Court ruled in favour of the federal government. While the states especially, Akwa Ibom, lost out, a political solution was found which gave birth to the idea of Oil Derivation, which sees a percentage of oil revenue being paid to the oil producing states.

While proponents of resource control were able to push it to a seemingly logical conclusion, the same could not be said of those agitating for restructuring of the country and devolution of powers.

Ironically, those who were at the forefront, incidentally, saw themselves in power in 2015 and suddenly developed cold feet about the whole idea.
The Vice-President, Prof. Yemi Osinbajo, who was the Attorney-General and Commissioner for Justice in Lagos State, when the state was at the forefront of restructuring, told those agitated to it now to approach the courts if they want to achieve their aims and objectives.
In fact, there was a time he said fiscal federalism was no longer feasible. With the current mindset of those, who once put the issue of restructuring on their heads, the agitation was destined to die a natural death. Or so it seemed.

Ironically, one of the leading figures of those who were against restructuring in the past has lent his voice to the campaign. Recently, former President Olusegun Obasanjo nearly shocked the nation when he declared that the issue of restructuring must be addressed now.

Hear him: “When I was elected President, the agitation was true federalism but now, it is restructuring. If we don’t address it, they may go from restructuring to violent self-determination and this will be a serious problem. If Boko Haram can get external support, any group that decided to go will get support from within or outside. So, we must address the issue now.”

He added that he would continue to fight for Nigeria’s unity till he dies but maintained this fight would not make him or his race second-class citizens in the country.
There is need to understand the nexus between the renewed call for restructuring in the country and current spate of killings and general insecurity in the country.
Correct or not, the impression the current government has given the rest of the country especially, those outside the Fulani ethnic stock, is that killer herdsmen are being treated with kid’s gloves if not being given official protection.

Since President Muhammadu Buhari took over nearly five years ago, Fulani herdsmen have perpetrated so many gruesome killings particularly, against farmers in the Middle Belt and southern parts of the country. The official line was that these herdsmen needed to move down the country and find grazing land for their cattle. It did not matter if they had to destroy farmlands in doing this or that they were total foreigners.

But these killer herdsmen have been emboldened, because no one has ever been arrested and charged to court. As recent as last week, these herdsmen killed and raped women in villages in Benue State.

It was this unfortunate development in the last couple of years that has made the call for restructuring and devolution of powers more strident.

Now, there are open calls for secession and, to put it more mildly, self-determination. The thinking is that with the way the country is currently set up, there will always be ethnic tensions, which if not properly managed, might lead to war.

While different ethnic groups are openly calling for a restructuring of the country if not outright break-up, former agitators who have now become silent since they are in power will soon realise that it is was an agitation that might assume a life of its own and become a movement.
While it was a ‘call’ in 1999, those pushing the cause of restructuring might go a step further in advancing their cause. And that step is what many cannot predict.