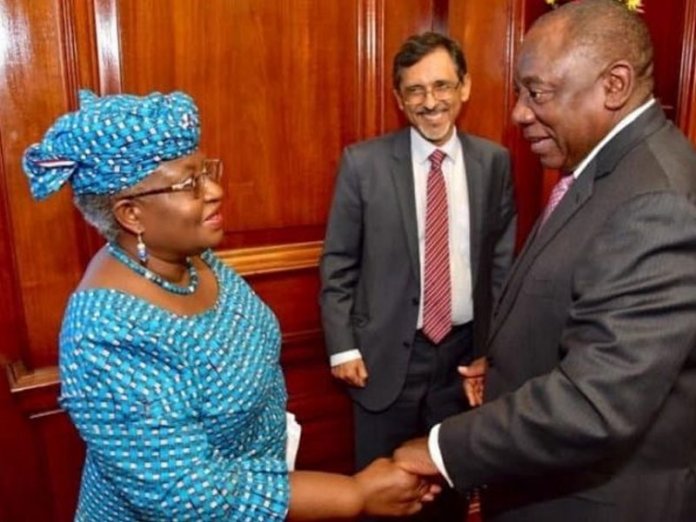 Obinna Chima in Lagos and Chuks Okocha in Abuja

In response to South Africa’s economic challenges, which recently slumped into its second recession in two years, President Cyril Ramaphosa has expanded the country’s Economic Advisory Council, with the appointment of Dr. Ngozi Okonjo-Iweala as a member.

This is as Mr. Peter Obi, the vice presidential candidate of the Peoples Democratic Party (PDP) in the 2019 general election and former governor of Anambra State, Okonjo-Iweala’s home state, has described her appointment as deserving and highly rewarding.

THISDAY gathered from a reliable source that at the second meeting of the Council, held at the weekend, Nigeria’s former finance minister was announced as a member of the Council.

But Ramaphosa had inaugurated members of the council last October 2019, where he said their role was to ensure greater coherence and consistency in the implementation of economic policy to ensure that government and society in general were better equipped to respond to changing economic circumstances.
The Council, THISDAY learnt, is a non-statutory and independent body chaired by the President and which brings together prominent economists and technical experts drawn from the academia, the private sector, labour, community, think tanks and other constituencies.

The members, who would volunteer their time and compensated for subsistence and travel, were appointed to serve a three-year term.
Also, the Council constitutes expertise in international economics; macroeconomics (including fiscal policy and monetary economics); labour economics; economics of education and the economics of poverty and inequality and urban development.

Other areas of insights entail microeconomics with a focus on network industries, regulation and competition, trade, energy and climate change.
Speaking at the meeting, Ramaphosa said, “This is your meeting as a council. You have been working in the intervening period and you are going to be making presentations. Now, as Advisory Council, you have set the agenda for this meeting yourself and you have identified various issues that you want to address us on. It is quite clear that a lot of work has been done since we last met.

“This meeting is really your collective response on the economic challenges our economy is facing right now. The diversity of ideas is what I appreciate. Now, there have been a number of developments that have taken place in our country, which I am not going to bore you with. Of course, the immediate challenge we are facing now is the energy crisis.”

However, on her Twitter handle, Okonjo-Iweala, who is the Board Chairperson of Gavi, a public–private global health partnership committed to increasing access to immunisation in poor countries, wrote: “With President Ramaphosa, members of cabinet, and members of the Presidential Economic Advisory Council in Pretoria discussing sources of growth for the South African economy and win-win economic interactions with the continent.”

The two-term Minister of Finance in Nigeria and former Managing Director (Operations) of the World Bank is also the Board Chairperson of the African Risk Capacity and board member, Standard Chartered Bank and Twitter.
The South African economy contracted 1.4 per cent in the fourth quarter of 2019, according to official statistics released on Tuesday, far outpacing analyst forecasts of a 0.2 per cent decline.

The contraction came after a 0.8 per cent drop in economic output during the previous quarter, leading to South Africa’s second recession — defined as two quarters of negative growth since 2018.

Describing the appointing as ‘deserving and highly rewarding’, Obi, who spoke at the Domestic Wing of the Murtala Muhammed Airport, Lagos during a brief chart with journalists, said with her appointment, South Africa had picked an experienced and committed economic manager.

He added that the choice of Okonjo-Iweala had put a square peg in a square hole, which he described as a “veritable move towards the restoration of her troubled economy.”

Obi recalled how Okonjo-Iweala’s effort to save for Nigeria’s future came to naught, when the Nigeria Governors’ Forum refused her advice, but called her names and even went to court to stop her from saving huge sum in excess crude account in the Sovereign Wealth fund.

Obi, therefore, described Okonjo-Iweala as “an exceptional personality and first class ambassador of our country Nigeria and one whose commitment to a better society remains outstanding.