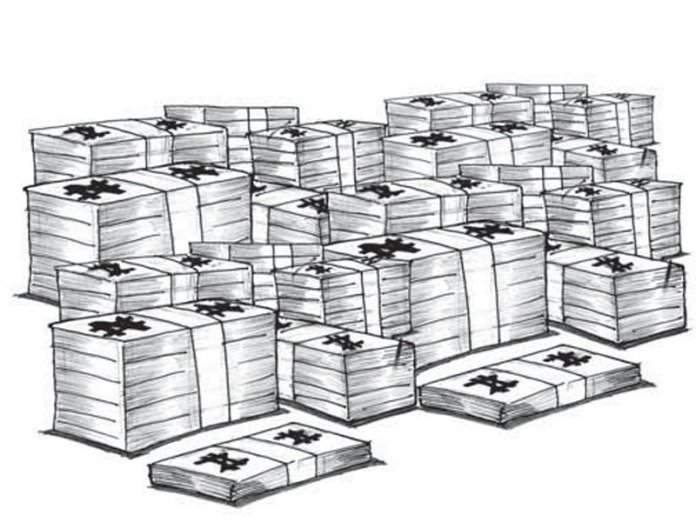 Trade-related illicit financial flows (IFFs) between and among 135 developing and 36 advanced economies over a 10-year period stood at $8.8 trillion, a new report just released by the United States-based Global Financial Integrity (GFI), has revealed.

GFI which works to curtail illicit financial flows, producing ground-breaking research, fact-based advocacy, pragmatic policy solutions and innovative government advisory services stated in the latest report which spanned a period between 2008 and 2017 that it uncovered a gap of $8.8 trillion in reported trade between 135 developing and 36 advanced economies.

Noting that trade mis-invoicing is a significant obstacle to sustainable development, GFI said in putting together its report, it examined latest official trade data reported to the United Nations (UN), to estimate the magnitude of trade misinvoicing – one of the largest components of measurable illicit financial flows (IFFs) between and among 135 developing countries and 36 advanced economies.

It described trade mis-invoicing as a situation where importers and exporters deliberately falsify the stated prices on invoices for goods they are importing or exporting as a way to illicitly transfer value across international borders, evade tax and/or customs duties, launder the proceeds of criminal activity, circumvent currency controls, and hide profits offshore.

According to GFI, the countries included in the report were based on the International Monetary Fund (IMF) classification system, which comprises 148 developing countries and 36 advanced economies.

However, the organisation disclosed that 13 of the developing countries did not report sufficient trade data to the UN to be included in the analysis, a group Nigeria may have fallen into since it was not mentioned among the countries in Sub-Saharan Africa which suffered from the $8.8 trillion IFFs despite President Muhammadu Buhari’s declaration last year ,that Nigeria lost $157.5 billion to illicit financial flows between 2003 and 2012.

Details of the report show that in 2017 alone, $817.6 billion was the gap identified in trade between 135 developing countries and 36 advanced economies.

Developing countries with the largest value gaps as a percentage of their total bilateral trade with the 36 advanced economies over the ten-year period are The Gambia – 37.3 per cent, Togo – 30.2 per cent, The Maldives – 27.4 per cent, Malawi – 26.8 per cent, and The Bahamas – 26.6 per cent

By contrast, China ranked 80th out of the 135 developing countries analysed, with an average value gap of 18.8 per cent of its total bilateral trade with the 36 advanced economies over the same period.

The average sizes of the value gaps by dollar amount between the developing country regions and the 36 advanced economies over the review period are Asia – $476.3 billion, Developing Europe – $167.9 billion, Western Hemisphere – $131.5 billion Middle East/North Africa – $70.6 billion, and Sub-Saharan Africa – US$27.2 billion.

A closer analysis indicate that $63 billion was the largest value gap identified when examining trade misinvoicing between developing country regions over the ten-year period was between Developing Asia and the Middle East/North Africa in 2014.

The lowest value gaps identified when examining trade ($1 billion)misinvoicing between the developing country regions over the ten-year period were between Sub-Saharan Africa’s trade with Developing Europe, Middle East/North Africa and the Western Hemisphere in several of the years.

Overall, the the report showed that trade misinvoicing is a persistent problem across developing countries, resulting in potentially massive revenue losses – at a time when most countries are struggling to mobilise domestic resources to achieve the internationally-agreed UN 2030 Sustainable Development Goals (SDGs).