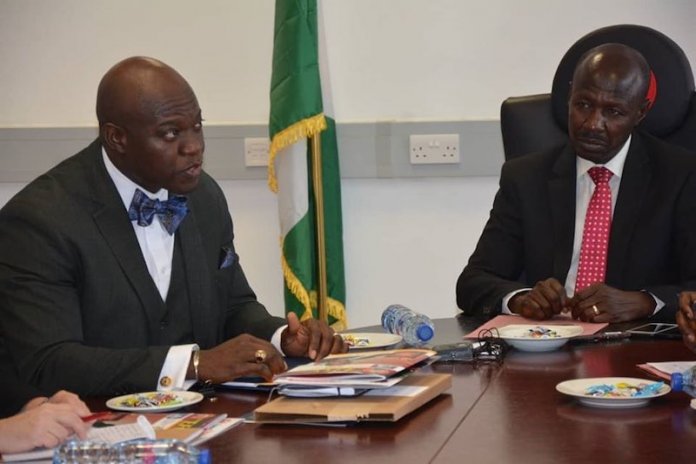 The acting Chairman of the Economic and Financial Crimes Commission (EFCC), Mr. Ibrahim Magu, yesterday received an Award of Excellence from the Federal Bureau of Investigations, (FBI), for his unique role in the joint field operation with the FBI codenamed, “Operation Rewired” aimed at tackling the menace of cybercrimes

The FBI legal attaché, Uche Ahamdi who presented the award during a visit to the EFCC Headquarters in Abuja, commended Magu’s leadership as well as the commission over the collaboration in the fight against corruption.

Commending Magu for the fight against cybercrimes, Ahamdi said, “after a long race and crossing a certain finished line, we look back and see how far we have gone, and then come back together to say thank you very much for all your support in tackling the Business Email Compromise, BEC menace across the world, not just in Nigeria, but across the world.”

According to Ahamdi, the EFCC under Magu has put in place efficient working collaboration leading to the arrest and prosecution of the perpetrators of BEC across the globe.

He reiterated the need for more collaboration between the FBI and the EFCC, stressing that the FBI was “immensely pleased” with the assistance rendered by the Commission.

“We come to present a few token of our appreciation in the form of citation and certificates from the FBI to the operatives who handled part of the BEC rewired operation,” Ahamdi added.

Responding, Magu appreciated the FBI for deeming it fit to consider him and his team worthy for the award of excellence, and gave assurances of the Commission’s readiness to continue partnering with the FBI.

According to the anti-graft czar, the exchange of intelligence with the FBI helped the Commission in winning the fight against cyber-crime, adding that the working relationship with the FBI was necessary “because corruption is a borderless
crime”.