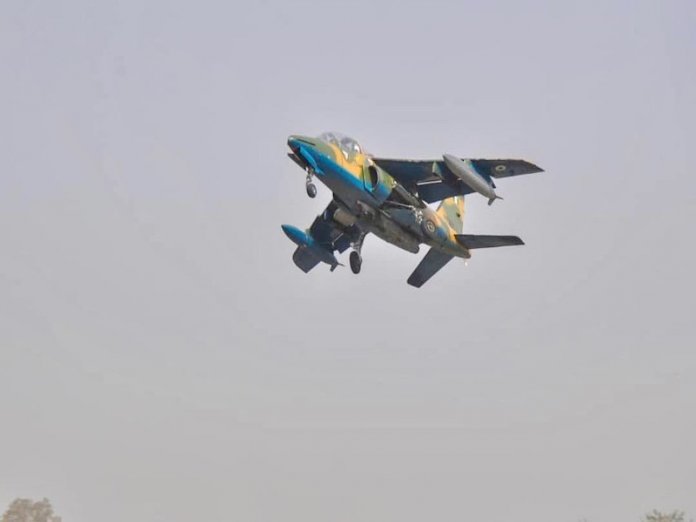 Operation Rattlesnake 3 is aimed at targeting selected locations within the North-east in order to shape the battle space for the effective conduct of further ground and air operations.

Through its Air Task Force (ATF) of Operation LAFIYA DOLE, Operation Rattlesnake 3 launched an onslaught against terrorists’ elements in the North-east on February 5. Targeting selected locations within the North-east, they further degraded the remnants of the terrorists as well as denied them freedom of action.

According to the Director of Public Relations and Information (DOPRI), Air Commodore Ibikunle Daramola, on that day, air strikes by NAF attack aircraft resulted in the destruction of an Islamic State of West Africa Province (ISWAP) hideout as well as the neutralisation of some of their fighters at Tongule in the Lake Chad area of Northern Borno State. The air strikes were executed following series of Intelligence, Surveillance and Reconnaissance (ISR) missions, indicating that ISWAP fighters were harboured in some buildings at the southern edge of the settlement.

Accordingly, the ATF dispatched its fighter jets to engage the location, scoring accurate hits on the designated target leading to the destruction of the structures and the neutralisation of some of the terrorists.

On February 7, the operation intensified and they
eliminated some ISWAP terrorists and destroyed compounds housing them at Kaza in the Northern part of Borno State. The air strike was executed following credible intelligence reports indicating that some ISWAP elements, who relocated from nearby Tongule, had set up camp in a cluster of compounds at Kaza, along with their logistics supplies.

The DOPRI said the identified location within the settlement was attacked by the ATF’s fighter jets after confirmatory ISR missions showed significant presence of terrorists. This resulted in the destruction of the structures and the neutralisation of some of the ISWAP fighters.

On February 8, the operation recorded another major success with the neutralisation of some key BHTs leaders at Alafa Yagayaga on the fringes of the Sambisa Forest in Borno State. This was achieved when fighter jets dispatched by the ATF obliterated a compound in the settlement where the leaders had assembled for a meeting.

Daramola said the air strike was executed on the heels of credible intelligence reports indicating that the BHT leaders had converged at the target compound for a meeting over the weekend, adding that ISR missions, which confirmed the meeting venue, also observed several BHTs in and around other buildings in the vicinity of the compound. Bombs from the detailed attack aircraft scored accurate hits on the target leading to the obliteration of the compound and surrounding structures as well as the neutralisation of their BHT occupants.

On February 16, another successful air raid by NAF destroyed an ISWAP training camp at Kirta Wulgo on the fringes of the Lake Chad in the Northern part of Borno State. This was again achieved in air strikes conducted on the heels of credible intelligence reports as well as series of ISR missions which established that some structures within the settlement were being used by the terrorists to house and train their fighters.

Accordingly, the ATF dispatched an enhanced force package of attack aircraft to engage the identified locations within the settlement. The fighter jets took turns attacking the target area in successive passes taking out the training facilities.

Also, the intensified offensive operations of NAF dealt another devastating blow on elements of ISWAP with the destruction of another training camp at Tumbun Zarami on the fringes of the Lake Chad in Borno. The mission was conducted on after successive days of ISR missions as well as intelligence reports from multiple sources, including the Multinational Joint Task Force (MNJTF) Headquarters, which revealed that training activities were being carried out in and around some makeshift structures hidden under the shrubbery within the settlement.

Consequently, the DOPRI said the ATF detailed its attack aircraft the engage the “Training Camp 4”, scoring accurate hits which led to the destruction of the suspected camp commander’s house as well as some other structures within the camp.

On February 19, the ATF destroyed an ISWAP hideout and neutralised some of its fighters at Bukar Meram on the fringes of the Lake Chad. This was achieved in air strikes conducted after intelligence reports had indicated an increase in activities in the settlement with the observation of more terrorist fighters operating in the area.

Accordingly, the ATF scrambled its attack aircraft to engage designated locations within the settlement scoring multiple hits, leading to the neutralisation of some terrorists as well as the destruction of some structures housing the ISWAP elements.

On Thursday, February 20, air strikes conducted by the ATF under the auspices of Operation Rattlesnake 3, have continued to yield tangible results against terrorist elements. The latest of these was achieved in attacks conducted at Jubillaram and Alinwa in Borno State, where some key ISWAP leaders were neutralised as they assembled for meetings at the two locations.

The DOPRI said the mission was executed on the heels of credible intelligence reports indicating that some key ISWAP leaders had assembled for meetings, which were being held simultaneously at two separate venues, at Jubillaram and Alinwa in Marte Local Government Area. Accordingly, he said the ATF scrambled its attack aircraft to engage both locations, damaging the meeting venues and neutralising the terrorists.

Expressing optimism on the fight to degrade the terrorists, Daramola added that the NAF, operating in concert with surface forces, will continue to sustain its air campaign to shape the battlespace in the North-east for the effective conduct of further ground and air operations.