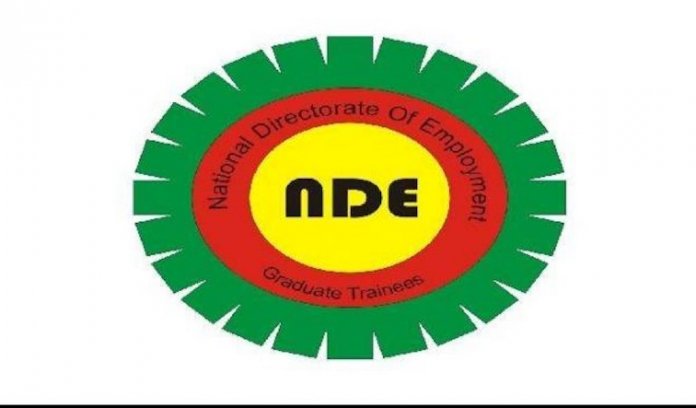 No fewer than two thousand, two hundred unemployed school leavers, widows the Vulnerables are currently engaged by the National Directorate of Employment (NDE) for training under the directorate’s Vocational skills acquisition and school-on-wheels programme in Osun State. The NDE Director General, Dr Nasir Mohammed Lardan disclosed this yesterday in Oshogbo, through Mallam Ismail Yekeen , NDE Osun state Coordinator at the ceremony marking the commencement of theTrainning programme. According to him, the Vocational skills acquisition training, comprises of different trades, based on the choices and preferences of the prospective trainees, while the School- On- Wheels scheme which is being hosted by the Oriade Local Government of Osun State, is more specialised scheme involving trades such as, hair dressing, knitting, bag making, and metal fabrication.

Dr Lardan said the NDE’s approach of impacting skills to unemployed youths to enhanced their self esteem and become self reliant, has become a saving grace to reduce tension and social unrest among youths, who are always bubbling with a lot of energy, which could be positively developed for National Development.

He urged the selected participants to be dedicated, punctual at their duty post and ensure the overall success of the programme.

He said, under the current exercise, the participants will undergo the training for three months, adding that based on the age long practice of the NDE, the trainees could be assisted with resettlement equipment, upon completion of the programme to set up their businesses, and also employed others.

The NDE boss, emphasized that the training programme marks another mile stone in the continuous efforts of the NDE to nip in the bud the growing rate of unemployment In the country.

He urged the participants to take the training seriously as white collar jobs are not easily available.

Meanwhile Director General, of the national Directorate of Employment (NDE) Dr. Nasiru Mohammed Lardan Argungu, has pledged to take the directorate to greater heights, to achieve the mandate of “Jobs for all” through job creation and employment generation activities.

Dr. Lardan, stated this through the NDE South West, Zonal Director, Hajia Awulat Zafaru, while receiving in audience, the NDE management Team from Osun state, who were on official working visit to the Zonal office.

The DG, who noted with satisfaction, that the NDE has remained relevant, as an apex employment agency, because of the directorate’s high level of performances in the area of programme implementation and programme delivery.

While appreciating all NDE Staff past and present for their contributions toward achieving the lofty heights, he enjoined the current staff of the directorate to keep the flag flying.
According to the DG, “the NDE has a lot of success stories to tell, you are therefore, advise to regularly update your record of achievements, particularly, at the state offices, which are usually Centre of operation.”

He emphasized that “whenever, we are in the office, we have to do a lot of record update,” while enjoining, the state coordinators to be up and doing, firm and decisive in the area of staff productivity, regular attendance at duty, report writing and discipline.

Earlier, in his speech, the state coordinator, NDE Osun state, Mr. Ismaila Yekeen, expressed appreciation to the NDE DG through, the Zonal Director, for the warm reception accorded his team. HE said, the Osun NDE Team, deemed it fit, to pay the working visit, to brief the Zonal office, about the NDE activities in the state, to familiarize, and also to seek for advise on how to move the state office forward. Mr. Yekeen, admitted that he has learnt a lot, and that the official visit has broaden his horizon, about the NDE activities at the Zonal office. He assured, of his commitment to NDE lofty ideals, and solicited for more assistance in the area of capacity building for staff at the state offices.