The federal government Thursday raised the alarm that Boko Haram insurgents are attacking Christians to divide the country.

Minister of Information and Culture, Alhaji Lai Mohammed, told reporters in Abuja that the terrorists’ new strategy of attacking Christians was deliberate to further incite disaffection against the Buhari administration.

However, Chief of Army Staff, Lt. Gen. Tukur Buratai, said the military was determined to secure the country from terrorists just as the army yesterday liberated 143 Boko Haram captives after a fierce battle with insurgents in Guzamala Local Government Area of Borno State.
The rescued hostages include 36 men, 36 women and 54 children.

Also, eight insurgents and 14 members of their families surrendered to troops in Banki town in Bama Local Government Area of Borno State.
But despite assurances by the Nigerian Army, no fewer than 21 persons were thursday confirmed dead following attack by bandits on Gurbi community of Kankara Local Government Area in Katsina State.

The minister, at the briefing in Abuja yesterday, assured the nation that President Muhammadu Buhari has no systematic campaign to persecute Christians.

He explained that the insurgents changed strategy and opted to target Christians to create confusion among Nigerians because they were feeling hurt by the military operations.

He pleaded with religious leaders not to fall for the war antics of Boko Haram, saying that the troops are winning the war with the recent killing of a top Boko Haram commander.

“When they targeted motor parks, the religion, gender, ethnicity or political leaning of the victims didn’t matter as long as they inflicted the maximum damage to lives and property.

“But in the wake of a renewed onslaught by our tireless military against Boko Haram and their ISWAP allies in recent times, the insurgents have apparently changed their strategy.

“They have started targeting Christians and Christian villages for a specific reason, which is to trigger a religious war and throw the nation into chaos. Apparently, they have realised how emotive and divisive religion can be when exploited by unscrupulous persons.

“Lest I am misunderstood, let me repeat: the insurgents, who delude themselves as Muslims whereas they are nothing more than blood-thirsty rapacious killers who subscribe to no religion, have recently started targeting Christians with a view to sowing the seed of confusion between the two great religions.

“This did not in any way signify that they have stopped attacking Muslims. But they seem to now have a deliberate policy of attacking Christians.
“The attack on a Christian village, Kwarangulum, near Chibok; the killing of the Chairman of the Christian Association of Nigeria (CAN) in Michika Local Government in Adamawa, Lawan Andimi; the killing of Ropvil Daciya Dalep, a student who was also a member of the Church of Christ in Nations (COCIN) and the killing of 11 Christians on Christmas eve, etc, fit into this new strategy.

“Some have misinterpreted this to insinuate a systematic campaign to persecute Christians in Nigeria. This is absurd, and very unfair to the men and women who are daily battling the insurgents.

“The truth is that having run out of options in their battle against Nigeria, the insurgents are desperate to stay relevant; to stay in the news hence their cowardly and senseless strategy targeting Christians, as part of their increasing resort to the use of guerilla tactics.”
The minister pleaded with religious leaders not to buy into Boko Haram’s agenda.

“We want to therefore appeal to our religious leaders, both Christians and Muslims, not to fall for this desperate move by the insurgents; not to allow them to divide us as a people and weaken our resolve to deal the insurgents the mortal blow.

“In addition, we must also give our unalloyed support to the military, which has also upped the ante against the insurgents.
“The resort to the increasing use of guerilla tactics by the insurgents is a sign of weakness on their part. Contrary to the belief in certain quarters, these insurgents are getting weaker by the day, thanks to the gallantry of our men and women in uniform,” he stated.
Mohammed added that the military was doing well to win the war against insurgency.

The military’s success in the ongoing war against insurgents, according to the minister, includes the killing of top ISWAP leaders at two separate meeting venues at Marte Local Government in Borno State a few days ago; a similarly successful attack against the leadership of Boko Haram in Alafa Yagayaga in Borno earlier this month; the killing of Boko Haram chief judge in Lake Chad and the in-fighting in the leadership cadre of Boko Haram, which is the fallout of the pressure on the insurgents by the military.

Also yesterday, Buratai said the military was determined to secure the country from the terrorists.
He reassured the country of the military’s unflinching resolve to pursue its constitutional mandate of maintaining the territorial integrity of Nigeria.
A war update issued by the Media Coordinator, Nigeria Army Operations, Col. Aminu IIyasu, said Buratai affirmed the determination of the military to continue to execute its constitutional mandate.

“The Chief of Army Staff, Lieutenant General Tukur Yusufu Buratai, wishes to reassure the general public of the unflinching resolve of the Nigerian Army to continue to execute our constitutional mandate professionally and responsively for a better and secure Nigeria.

“He also thanks all well-meaning Nigerians for their continued support, goodwill and understanding towards the gallant officers and men of the Nigerian Army,” it said.

The army listed the rescued victims to comprise 36 adult males, 36 adult females and 54 children.
It added that troops of 707 Special Forces Brigade also rescued 17 Boko Haram captives comprising six adult males, six adult females and five children.
Besides, eight members of Boko Haram and 14 members of their families of February 21 surrendered to troops of 152 Task Force Battalion, Bama.
IIiyasu said the insurgents expressed regrets over their involvement in the kidnapping and killing of innocent people.

However, despite the assurances by the Nigerian Army to end banditry in the North-west, no fewer than 21 persons were yesterday confirmed dead following attack on Gurbi community of Kankara Local Government Area in Katsina State

The bandits, according to residents, stormed the community at about 4. 17a.m. but were repelled by vigilante groups.

One of the residents, Usman Aliyu, who confirmed the incident to THISDAY, said: “The bandits attacked our village this morning (Thursday) but vigilante members in synergy with some of us killed 17 of them. They killed four of our villagers, including a woman.”

Confirming the attack, the spokesman of the Katsina State Police Command, Gambo Isah, a Superintendent of Police, said the bandits, armed with AK47 rifles, invaded the community and killed four persons and rustled unspecified number of animals.

Isah said the Commissioner of Police, Katsina State Command, Sanusi Buba, directed the DPO Kankara Division to deal with the situation, resulting in a fierce gun battle with the bandits.

“The team succeeded and killed 17 suspected bandits and recovered 80 cows, 108 sheep and a donkey from the hoodlums, which they earlier carted away from the village and other neighbouring villages.

“Some of the bandits managed to escape with gun shots wounds. Operatives are combing the nearby bushes for arrest of the fleeing bandits and recovery of their operational weapons. Investigation is ongoing,” he added. 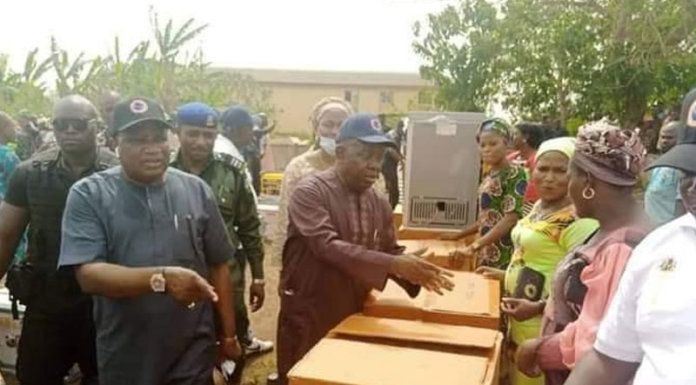