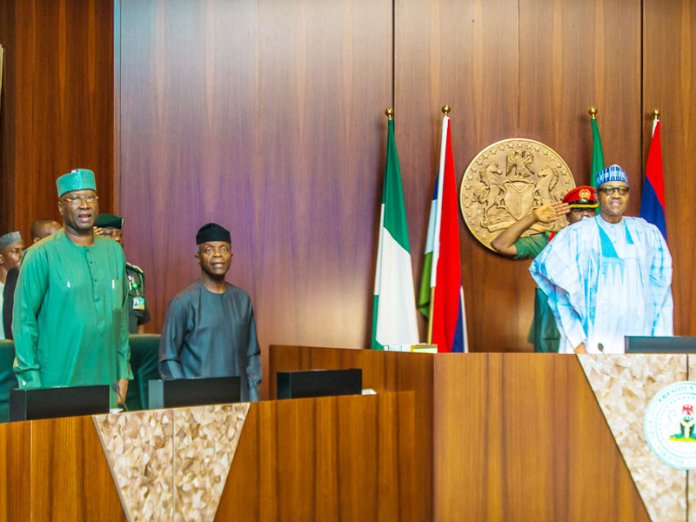 This is coming as President Muhammadu Buhari last night in Abuja approved the composition of a monitoring committee for the Niger Delta Development Commission (NDDC) in line with the provisions of Part V1, Section 21 of the NDDC Establishment Act.

Briefing journalists after the weekly Federal Executive Council (FEC) meeting in the State House, the Minister of Works, Mr. Babatunde Fashola, said the approval was the fallout of a memorandum of understanding (MoU) he presented to the council for the construction of a 46-kilometre road from Balle in Sokoto State to Niger Republic border at the cost of N9.5 billion.

He said the contract would be executed within a period of 24 months.

The minister also said the council approved another N19.7 billion for the construction of phase II of the project, which he described as a 50-kilometre road project from Kunia in Jigawa State to the Niger Republic border.

He said: “The Ministry of Works and Housing presented one memorandum for the award of roads. The first is Balle – Kurdulla -Niger Republic border road in Sokoto. It’s in favour of Messrs North Sea Limited joint venture with Ceasar Engineering at N9. 576 million to be completed in 24 months. The road is 46 kilometres.

“The second one is for Kunya – Niger Republic border phase II which is in Jigawa State at N19. 763.567 billion. The length of the roads is 50 kilometres and council considered and approved this memorandum on the justification made that it is critical to execute our mandate under the Economic Recovery and Growth Plan and ministerial mandate to improve infrastructure but also for the enablement of business across borders particularly now that we have taken an affirmative position of the African Continental Free Trade Agreement and the markets in that area of the country do a lot of trade across borders. So, this is a good boost for business as well.”

Also briefing, the Minister of Water Resources, Alhaji Suleiman Adamu said the council approved a memorandum of understanding seeking to extend the consultancy services on Kontagora-Auna Dam and Irrigation Project in Niger State.

Adamu, who said the project took off in 1987 and was abandoned, explained that the federal government opted to revive the project in 2017/2018 and consequently approved N734.5 million for the extension of the services of the consultants by three years yesterday.

In his own briefing, the Minister of Aviation, Senator Hadi Sirika, said the council also approved a memorandum seeking the refurbishment of the Accident Investigation Bureau (AIB) office in Abuja as well as the establishment of a training school for accident investigation in the federal capital at the cost of N591.8 million and N645.4 million respectively.

“The contract sum for the construction of the school is N645, 453,627.80. For the refurbishment of the office, it is N591,857,050.39. It was taken and approved. The sum is inclusive of the equipment in the laboratory, it has laboratory components and the equipment are from their manufacturers, through the representatives of those manufacturers.

“They will be certified by International Civil Aviation Organisation and the ICAO, which is the regulator of the industry in Nigeria,” he said.

In the same vein, the Minister of Mines and Steel, Mr. Olamilekan Adegbite, said he presented to the council the account of his 100 days in office in line with the demand of the administration.

According to him, in line with the presidential initiative on gold purchase scheme in Nigeria, the Central Bank of Nigeria (CBN) has agreed to keep part of the foreign reserves in gold. He also disclosed that in line with the initiative, two gold refineries have been licensed in Nigeria.

“There is a gold purchase scheme. There is a presidential initiative on that. The CBN has agreed to keep part of its foreign reserve in gold. The CBN will be the off-taker of the gold in Nigeria. We have licensed two refineries in Nigeria.

“One is in Abuja. One is in Mowe in Ogun State. They will refine gold and of course produce bellium that the CBN can buy at international prices. This is also encouraging mining in Nigeria,” he said.

Meanwhile, Buhari last night in Abuja approved the composition of a monitoring committee for Niger Delta Development Commission (NDDC) in line with the provisions of Part V1, Section 21 of the NDDC Establishment Act.

Others are: Dr. Dorothy Nwodo, representing the Ministry of Humanitarian Affairs, Disaster Management and Social Development; and Mr. Alfred Abah, a director in the Ministry of Niger Delta Affairs as member.