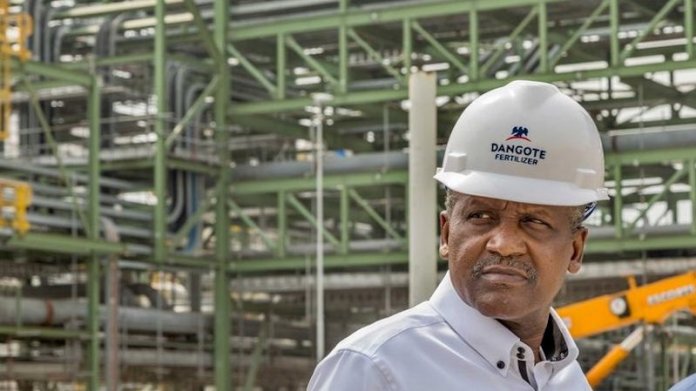 Dangote Fertilizer Limited has begun countdown to the inauguration of its $2 billion Granulated Urea Fertilizer complex, with several critical sections of the plant going through various stages of pre-commissioning and test-run.

With a capacity of three million tonnes per annum, the plant complex located in the Dangote Free Zone, has been classified as the biggest project in the entire fertilizer industry history in the world.

Saipem of Italy is the Engineering, Procurement and Supervision (EP) Contractor for the project, while Tata Consulting Engineers, India, is the Project Management Consultants (PMC).
According to a statement yesterday by the company, virtually all the section of the plant such as Central Control Room, Ammonia and Urea Bulk Storage, Cooling Tower, Power Generator Plant, Granulation Plant, have been completed and are going through pre-testing.

Already, Dangote Fertilizer has started receiving gas supply from the Nigerian Gas Company (NGC) and Chevron Nigeria Limited (CNL) under the Gas Sale and Purchase Agreement to supply 70 million standard cubic feet per day (Scf/d) of natural gas to Dangote Fertilizer Limited.
The statement added that the project, which will create thousands of direct and indirect jobs in construction and related fields, will provide a major boost to the agricultural sector by significantly reducing the importation of fertilizer in Nigeria and ultimately removing the need for imports when the plant is in full production.

The Group Executive Director, Strategy, Portfolio Development and Capital Projects, Dangote Industries Limited, Mr. Devakumar Edwin, said Nigeria would be able to save $500 million from import substitution and provide $400 million from exports of products from the fertiliser plant.

“The supply of fertiliser from the plant will be enough for the Nigerian market and neighbouring countries.
“I am happy that by the time our plant is fully commissioned, the country will become self-sufficient in fertilizer production and even have the capacity to export the products to other African countries. Right now, farmers are forced to utilise whatever fertilizer that is available as they have no choice; but we need to know that the fertilizer that will work in one state may not be suitable in another state, as they may not have the same soil type and composition. The same fertilizer you use for sorghum may not be the fertilizer you will use for sugar cane,” Edwin explained.

He stated that the project, which is estimated to gulp $2 billion, is the largest granulated urea fertilizer complex in the world, with its three million tonnes per annum capacity.
According to him, the fertilizer complex, which is sited on 500 hectares of land, has the capacity to expand as it is only occupying a small fraction of the allotted portion of land.

Edwin added: “The management of the complex is confident that the fertilizer business will deliver reasonable profit to the company and its shareholders as it is projected that population growth and the need for food production will jack up the consumption of urea fertilizer beginning from 2020 when production of the production would have commenced in earnest.

“The current consumption of urea estimated at a dismal 700,000 tonnes per annum by Nigerian farmers is said to be due to very poor usage and is believed to be the cause of poor product yield, which threatens food security in the country.