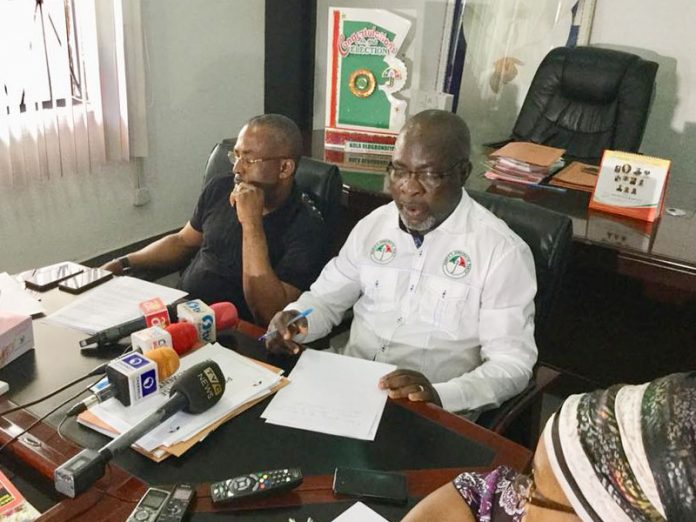 The Peoples Democratic Party (PDP) yesterday signalled its plans to launch a fresh bid to unseat President Muhammadu Buhari by approaching the Supreme Court to seek a review of its judgment validating the president’s election.

In addition, the main opposition party will also ask the apex court to reconsider its judgments on governorship election disputes in Kano, Katsina, Kaduna and Osun States where the Supreme Court affirmed the victories of candidates of the ruling All Progressives Congress (APC) in the elections.

APC, however, dismissed the PDP’s bid, describing the opposition party as a mockery of what an opposition party should be and a clog in the wheels of Nigeria’s political evolution.
PDP’s presidential candidate, Alhaji Atiku Abubakar, along with the party, had challenged the declaration of Buhari as winner of the presidential election by the Independent National Electoral Commission (INEC), citing irregularities and the president’s ineligibility because he had no secondary school certificate, among other grounds.

However, the Presidential Election Petitions Tribunal dismissed PDP and Atiku’s petition and upheld Buhari’s victory; a judgment that the Supreme Court, which heard the appeal of the opposition party and its candidate affirmed.

National Publicity Secretary of PDP, Mr. Kola Ologbondiyan, told reporters yesterday in Abuja that the party took the decision to seek a review of the Supreme Court judgments on the presidential election and the governorship elections in the four states in view of APC’s desperation to upturn the apex court decisions on Bayelsa and Zamfara States as well as to keep Imo State, which it believed the Supreme Court erroneously give to the ruling party.

Already, the APC is before the Supreme Court, asking it to re-examine its judgments in which it sacked its candidates in Zamfara and Bayelsa States and replaced them with those of PDP.
Ologbondiyan said the PDP National Working Committee (NWC) rose from a meeting yesterday and directed its lawyers to ask the Supreme Court to reconsider its affirmation of Buhari as the duly elected president of Nigeria.

Addressing a press conference on the outcome of the PDP NWC meeting entitled, ‘Position of the PDP on the Desperation of the APC to Subjugate, Intimidate for the Purpose of Annexing the Supreme Court over Imo, Bayelsa and Zamfara Governorship Election Judgments,’ Ologbondiyan said: “The NWC of the PDP, after comprehensive consultations, states that our party has no choice left, given the manner with which the APC has conducted itself, than to ask for a review of the judgment of the Presidential Election Petition Tribunal, where the issue of certificate forgery and or presentation of false information in aid of qualifications was clearly established against the APC and her presidential candidate.”

He cited the reason for seeking the review of the Supreme Court judgment on the Katsina State governorship election petition on the fact that PDP lawyers also established similar issue of certificate forgery against the Governor, Hon. Bello Masari of APC.

“The PDP equally has no choice than to ask the Supreme Court to review the Kano, Kaduna and Katsina States’ election judgments because of manifest violence and substantial non-compliance with our electoral law,” he stated.
He said the party would be asking the Supreme Court to review its judgment on the Osun State governorship election in view of alleged manifest and disregard to the electoral rules in the conduct of the elections.

“Our party will not fold its hands and watch enemies of our hard-earned democracy, who contributed nothing to its birth, to continue to appropriate our collective sovereignty for their selfish political gains while destroying our institutions and holding our people to ransom,” the PDP added.
According to the party, the decision to seek for the reviews is because the APC is allegedly all out to destabilise the country and destroy democracy.

The party added that the time has come for Nigerians to stand in unity to defend the country and salvage it from political marauders and oppressive elements.
“Our nation is already aware of the desperation by the APC to annex the Supreme Court, subjugate and browbeat the justices and direct judicial determinations to suit their selfish ends.

“The public space is already awash with reports of how the APC has been threatening and piling pressure on the justices of the Supreme Court to force a reversal of valid judgments already delivered on the Bayelsa and Zamfara governorship elections, where the party (APC) suffered self-inflicted losses.

“Nigerians know that the APC has been going through a hemorrhage since the Supreme Court delivered valid judgments on Bayelsa and Zamfara States and as a result, they are no longer interested in the logic of these judgments. They have since thrown caution to the wind to destabilise our nation and destroy our hard-earned democracy, especially the judiciary. The APC federal government is leading all forms of battle against the rule of law and constitutionalism,” it stated.

The PDP said it holds the sacrifices for the sustenance of democracy, as demonstrated in its comportment after the verdicts of the court on the presidential election as well as Osun, Kano, Katsina and Kaduna governorship elections were delivered.

“There is a consensus among majority of Nigerians, and even the international community, that there was an obvious miscarriage of justice by the Supreme Court panel on the Imo State governorship election, for which the PDP accordingly reverted to the Supreme Court asking it to correct the manifest mistakes and errors in that judgment, which are already in the public domain,” the party said.

However, the PDP added that it found it ludicrous, ridiculous and insulting to the sensibilities and respect of the Supreme Court justices for the APC to head to the apex court to seek reversal of the judgments on Bayelsa and Zamfara States’ governorship elections.

He explained that the PDP’s latest antics was no surprise as it has been exhibiting strange behaviours since its defeat at the polls.
The ruling party said it believed it has been difficult for some leaders of PDP to cope for so long outside of power, adding that many of them are idle.

Issa-Onilu stated: “Never in the history of our democratic journey has a political party made mockery of what a responsible opposition politics entails. The PDP’s call has once again, reinforced our party’s belief that the PDP has become a clog in the wheels of our country’s political evolution.

“At this period that our government is working hard to ensure food sufficiency in the country, we urge those jobless characters at the Wadata House (PDP secretariat) to seriously consider taking up rice farming. This would make them useful for our country.”