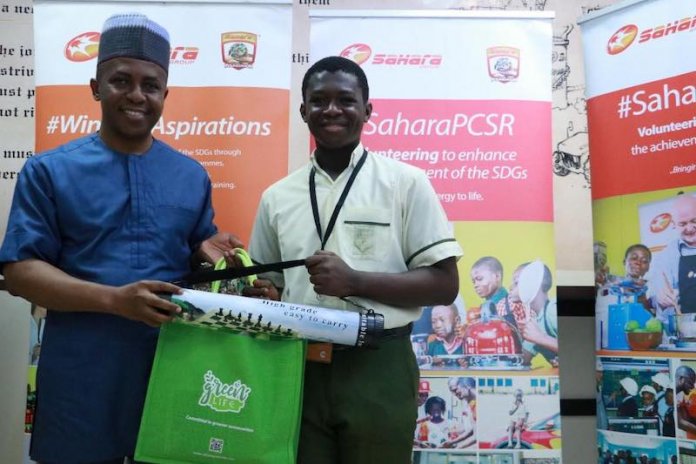 Dolphin Senior High School in Lagos has emerged winners of Sahara Group’s #CleanLoveFeb Chess Competition which was organised as part of the energy conglomerate’s ongoing campaign against substance abuse, especially among young people.

The chess tourney, according to Head, Corporate Communications, Sahara Group, Bethel Obioma, was designed to serve as a platform to inspire young people to look to sports, books and educative web portals for recreation and academic excellence.

“Chess is a game that stimulates mental alertness and critical thinking. We chose public secondary schools to encourage the students to aspire to challenging for laurels in a game that is considered elitist. The competition also served the purpose of creating awareness on the dangers of substance abuse and inspiring these young future leaders to channel their energies into activities that will help them realise their dreams,” he said.

At the end of the competition, both contestants from Dolphin Senior High School outplayed their opponents to emerge as the overall winners of Sahara Group’s #CleanLoveFeb chess competition. Lejidu Abdul-Lateef went on to checkmate his way to claim the coveted Best Player of the Tournament Award.”

All finalists were rewarded with prizes including books, Sahara corporate souvenirs and chess sets to the schools to encourage the cultivation of the chess-playing culture.

The competition which was implemented through Sahara’s Personal and Corporate Social Responsibility vehicle, Sahara Foundation, enlisted the support of the INVENT Programme, a mentoring platform for in- school youth.