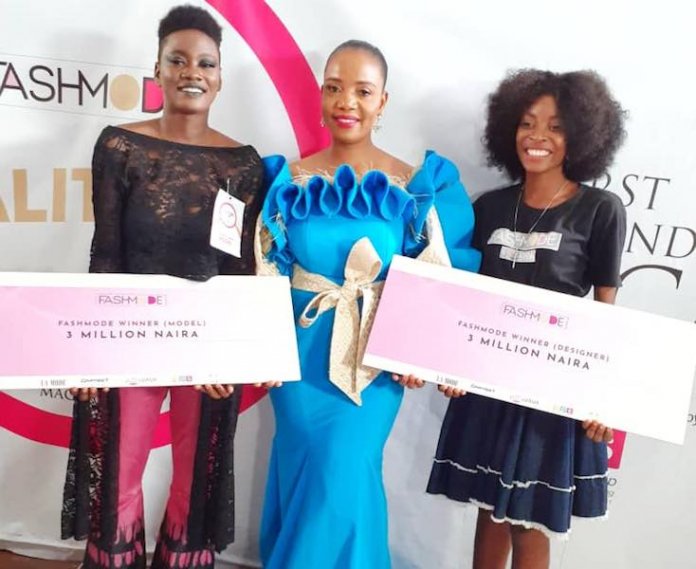 Omotayo Olagunju and Serikudi Azeezat has emerge as winners of the maiden edition of ‘FashMode Season One Reality TV Show’.

The show which lasted for five weeks and was premiered in January, 2020 came to it’s climax on February 21, with Olagungu, a designer and Azeezat, a model, winning the N3 Million cash prices respectively in the both categories.

Speaking with THISDAY about the show, the Publisher and CEO, La Mode Magazine and FashMode Director, Mrs. Sandra Odige said, “FashMode, is a first of its kind in Africa reality TV competition, that seeks to promote and shine the light on the African Fashion and Modeling Industry, and eventually present to the continent and the world at large.

“The show saw top celebrities, like actors Belinda Effah and Linda Osifo, and top entrepreneurs like Adeola Adeyemi, and Adedotun Adeyeye of Fresh by Dotun brand, come mentor and teach the contestants on things that will help them grow and be sustainable in their career paths.

“In the search for the Ultimate Designer-Model combo, the contestants were given tasks each week, to put their creativity and entrepreneurial skills to test, occasionally randomly pairing each designer to a
model and vice versa, to create a master piece, and at the end of each week, at least two or more contestants were evicted.

“At the end of the competition which aired every Sunday from 6pm to 7pm, for five weeks on DSTV Channel 262, GOTV Channel 102, Startimes Channel 116, Starsat, Play TV, and online on @LaModeMagTVNG on YouTube, Designer, Omotayo Olagunju and Model, Serikudi Azeezat, had their lives changed in a moment.

“As against all odds they emerged as the Ultimate Designer-Model Combo, and walked away with a whooping sum of N3 Million each, they also won an all expense paid trip to Dubai, courtesy Egypt Air, and many more endorsement deals worth millions of Naira.”